Joshua Johnson Stopped in Missouri on His Way to Nashville. He Never Made It 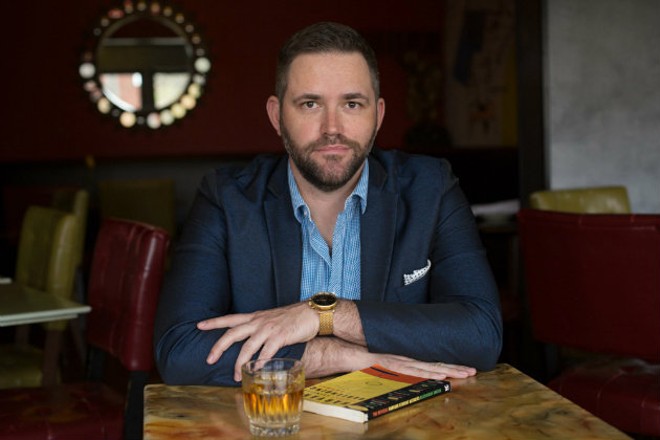 When Joshua Johnson was 21, he wandered into a Huntington Beach bar called Baja Sharkeez in search of some beer money. He didn't realize it at the time, but slinging Jager Bombs for SoCal beachgoers would turn lead him down a path to his true calling.

"I needed a gig to pay for beer, bills and girls," Johnson laughs about his time at the raucous bar. "This place was a block away from the beach, with fish tacos, burgers, Long Island ice teas and vodka Red Bulls. It was a party atmosphere. I wasn't exactly doing craft cocktails there."

But those conditions didn't stop Johnson from catching the restaurant bug. Though he'd gone to school for professional baseball marketing, he found himself drawn to the dynamic nature of the bar industry — a place where every day is filled with new people and new experiences.

That burgeoning passion promoted him to get a job in a casino bar where he got to see the other side of the industry. There, he filled his weekends making upscale drinks for suited-up high-rollers; weekdays were spent pouring shots for the partygoers at Sharkeez. It was the perfect set-up for a carefree twenty-something, but it couldn't last forever.

"I moved to Texas to be with my family because I needed a breather from bartending," Johnson explains. "When I moved back to California, I still needed a break, so I took two years off from the industry."

During that two-year period, Johnson worked for Luxotica, the sunglasses brand, and was responsible for overseeing seventeen stores in the San Diego market. He jokes that selling sunglasses in California was the easiest job on the planet, but it was also the most time-consuming gig he'd ever had, one that involved numbers, sales, financial analysis and spending a lot of time in a cubicle. He became restless.

It wasn't just work; Johnson knew he needed a change of scenery as well. He decided to move by spinning the globe and seeing where his finger landed. Nashville was it, so he packed up and began a cross-country road trip. He never made it.

"My cousin managed a bar in Branson and said, 'Hey, you don't have anything going on. Why don't you stay?'" recalls Johnson. "I said that I would give it a month. I ended up staying a year."

Johnson laughs about the culture shock he experienced going from Southern California to Branson, but he actually liked his new digs. The cost of living and change of seasons were positives for him. So were the connections he made. He began making friends with distributors and importers and the next thing he knew, he was living in St. Louis as a brand ambassador and educator, working for high-profile spirits companies from around the world.

That was five years ago, and Johnson has never left. In in addition to his brand work, he got back behind the bar for a while at the Preston in the Chase Park Plaza hotel, then branched out on his own to co-found Cocktail Collective, a food and beverage consulting firm. In a way, he can see elements of his marketing work with his company, though cocktails are much different to him than sunglasses — they're his passion.

"People say, 'Oh, bartending, is that your real job?' and it is," Johnson says. "It's not just an in-between gig anymore. It's a real profession and a lifestyle and career. I've realized that I love being in the food and beverage industry and just went for it. When you're passionate, that's what you do."

Johnson took a break from Cocktail Collective to share his thoughts on the St. Louis food and drink scene, he love of tiki and how he satisfies his love of architecture by building cocktails.

What is one thing people don’t know about you that you wish they did?
I’m pretty much an open book, but I must leave some things to the imagination.

What daily ritual is non-negotiable for you?
My morning coffee and daily dose of vitamins. I’ve realized the older you get, the more you must take care of yourself.

If you could have any superpower, what would it be?
Omnilinguilism. The ability to understand any form of language. I could travel around the world and never have to worry about a language barrier. Plus, ace every language class in school.

What is the most positive trend in food, beer, wine or cocktails that you’ve noticed in St. Louis over the past year?
Tiki cocktails. They are fun, delicious, gorgeous and can use a wide base of ingredients. Contrary to popular belief, a tiki cocktail doesn’t have to be just rum based. I love rum/r(h)um, but I love all spirits. You might say that I’m a spiritual. For example: the "Singapore Sling" is gin-based, "Pinky Gonzales" is tequila-based, "London Sour" is Scotch-based, "Chi-Chi" is vodka-based, and "Port Light" is bourbon-based, just to name a few. Most tiki cocktails are a blend of spirits.

What is one thing missing or that you’d like to see in the local food and beverage scene?
I’d really like to see the use of molecular gastronomy in the food and beverage scene. I’m a science geek and I love the physical and chemical transformations of ingredients that occur in cooking. Moleculecular gastronomy is social, artistic and technical. If innovative bartenders didn’t push traditional boundaries then we wouldn’t have remarkable experiences like you find at the Aviary in Chicago, the Bazaar in Los Angeles or the Pass in Houston.

Who is your St. Louis food or drink crush?
Beamer Eisele and Ronnie Fink of Modern Brewery. Those guys constantly make great beer! And they’re awesome dudes as well. I love seeing more and more of their tap handles pop up around the Lou.

Who’s the one person to watch right now in the St. Louis food and beverage scene?
To limit it to only one person is very hard, so I have three. As far as chefs go, I’d keep an eye on Nathan Sandknop and Zach Siecinski at the Preston and Chase Club, both inside the Chase Park Plaza, who are constantly using and making house-made ingredients and continually being innovative. For beverages, Zach Stout at Frazer’s. He has one of the best flavor palates in this town and excellent hospitality.

Which ingredient is most representative of your personality?
I would say tequila. You can sip it, shoot it or make a great cocktail with the delicious 100 percent blue agave spirit. When a bottle of tequila shows up you know you’re going to have a good time, and I always like to have a good time.

If someone asked you to describe the current state of St. Louis’ food and beverage climate, what would you say?
It’s constantly growing. Every year there are great new bars and restaurants popping up and more James Beard nominees.

If you were not tending bar, what would you be doing?
I’d be an architect. I love to plan, design and create. It’s how I’m wired. There’s a form of architecture that goes into making great cocktails and composed dishes as well.

Name an ingredient never allowed behind your bar.
Artificial flavors and Malört. Malört is only good for when you need to unfriend someone in person.

What is your after-work hangout?
Usually home, but I’ve been to the Scottish Arms once or twice for a tipple or two.

What would be your last meal on earth — including drinks of course.
In-N-Out double cheeseburger with grilled onions, french fries (animal style), and a bottle of Booker’s Rye. It’s the simple things in life that I enjoy.