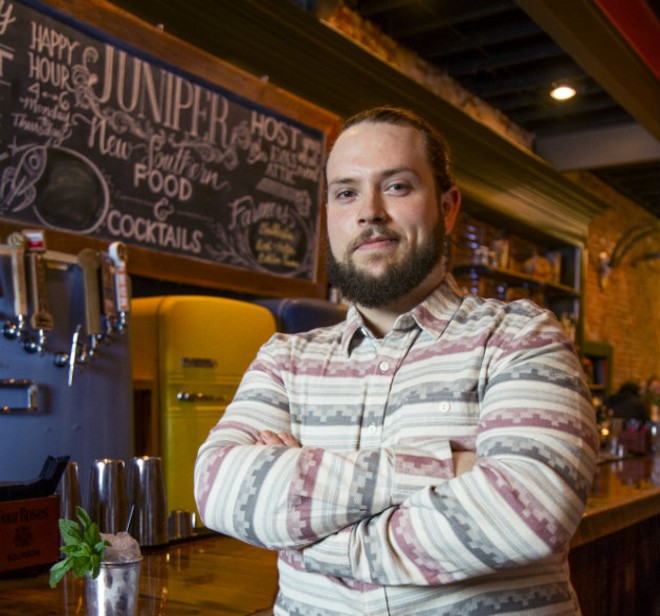 Glenister Wells lost his father at a young age, but his memories of the man remain fresh — and proved foundational.

"One of my memories of him was watching him sit in front of the TV on weekends with a legal pad," Wells recalls. "He would watch Emeril Lagasse or Julia Child — any of that sort of cooking show —and write down recipes. It's one of my earliest memories of him."

Wells, who was recently tapped to be executive chef of the acclaimed Southern restaurant Juniper (360 North Boyle Avenue, 314-329-7696), also had another family influence that helped to inspire his culinary career. One of his first food memories involved making egg noodles at the dining-room table with his grandfather, a joyous home cook who, along with his grandmother, loved entertaining and throwing dinner parties.

But though Wells loved food and cherished the memories associated with it, he found another passion when he was in school that took up more of his headspace: music.

"I got into percussion and music in school and fell in love," Wells says. "I chose the rock-n-roll lifestyle and pursued that dream, but I had to reconcile one day that it wasn't the healthiest and most realistic life choice."

Wells happened to be working in a kitchen when he came to this realization. Though that gig was just a means to make money, a friend reached out to him with an opportunity that would be something more. Pastaria was looking for someone to work in their kitchen, and the friend thought Wells would be a good fit. He put him in touch with chefs Michael Petres and Ashley Shelton, and the next thing he knew, Wells was working in a job that not only felt like a viable career path, but also made him feel like he was finally embracing his life's calling.

"I found myself again when I started at Pastaria," Wells explains. "It guided me to the place I was supposed to be — I'd been working in the kitchen all this time, and it turns out, I was right at home. I just wasn't aware."

At Pastaria, and under Petres and Shelton in particular, Wells was shown that the kitchen could be a positive work environment — not one characterized by old-school chefs who yell and throw things. He worked there three years, taking on additional responsibilities and honing his craft.

When a friend approached him earlier this year about an opportunity to work with John Perkins at Juniper, he agreed to hear him out. When Wells and Perkins began chatting, they forged an immediate connection over everything from hospitality to the importance of telling the story of culture through cuisine.

Perkins offered him the job as Juniper's executive chef, and Wells accepted, seeing it as a way to stretch himself professionally. And stretch he will. The restaurant is moving from its current digs to a new location in the Central West End sometime this summer, expanding its hours and changing its menu.

Wells could not be more excited for the chance to tell stories with food. In fact, when he reflects on his own, he realizes how important a role food and hospitality have played, even when that hasn't always been so apparent on the surface.

"It rubbed off on me," he says of the prevalence of food in his upbringing. "Somewhere, within my subconscious, it was embedded. Destiny chose me at that young age."

Wells took a break from the kitchen to share his thoughts on the St. Louis food-and-beverage scene, his yin-and-yang daily rituals, and why French fries are always the answer.

What is one thing people don’t know about you that you wish they did?
My love for music and the fact that I’ve been a percussionist for most of my life. I’d say another secret of sorts is that I’d love to start a hip-hop group.

What daily ritual is non-negotiable for you?
Like most humans, coffee. And just recently, yoga and coffee… in that order.

If you could have any superpower, what would it be?
The power to give everyone in this country equal rights and equal opportunity.

What is the most positive thing in food, wine or cocktails that you’ve noticed in St. Louis over the past year?
I would say the amount of new places that are popping up that are really doing food justice and helping to put St. Louis on the map as a culinary destination.

What is something missing in the local food, wine or cocktail scene that you’d like to see?
Probably more late-night food options that don’t make you feel terrible for eating them.

Who is your food crush?
Definitely Enoch Simpson. Enoch is a badass cook and like an older brother to me.

Who’s the one person to watch right now in the St. Louis dining scene?
Evy Swoboda of Pastaria, for sure — who I believe is working on a very exciting project right now.

Which ingredient is most representative of your personality?
I’m going to say the Serrano chile. They’re sometimes very fiery but they always mellow out.

If you weren’t working in the restaurant business, what would you be doing?
I would probably be working in the special-needs field. Four years ago, I lost my sister who had Down syndrome, and she’s been an everlasting impact in my life.

Name an ingredient never allowed in your restaurant.
Fake butter/margarine. It just freaks me out!

What is your after-work hangout?
If it’s not straight home to hang out with my girlfriend and dog, you can find me at Sasha’s on Shaw enjoying a Busch beer.

What’s your food or beverage guilty pleasure?
French fries. I completely lose all willpower when they’re cooked in front of me.

What would be your last meal on earth?
Definitely hot chicken! And some greens, French fries and a pizza to wash it down.