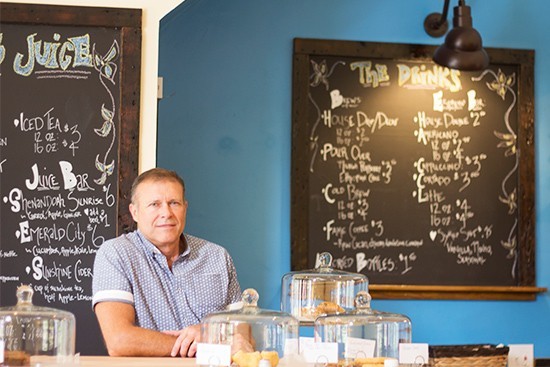 After just shy of four years in Tower Grove East, Kitchen House Coffee (3149 Shenandoah Avenue, 314-732-0009) is ready to double its fun: It plans to open a second location in the Patch neighborhood this summer.

Paul Whitsitt, the coffee shop's owner, says he's secured the storefront at Schirmer and Ivory across the street from Stacked Burger Bar, next to the former Feraro's Jersey Style Pizza. Thanks to a partnership with the business going into Feraro's space, Whitsitt says he'll be able to take advantage of the kitchen there to increase the menu offerings at both Kitchen House locations.

"I don't have a full kitchen where we are now," he says of the Shenandoah location. "We cook what we can using induction burners in-house. But things that require an oven, or things we're baking, we've had to cater in. This will let us do the cooking for both shops out of that kitchen."

Even with that opportunity, though, Whitsitt says he expects to keep a vibe that's more coffee shop vibe than restaurant, with counter service and a menu of cafe-style fare. He does, however, plan to offer brunch service on both Saturdays and Sundays — and, with room for about 50, bigger crowds than the original location can accommodate.

Both Kitchen Houses will share a focus on urban farming and sustainability, Whitsitt promises. But don't expect to see a chicken coop at the Patch location. Since the lot doesn't lend itself to that, Witsitt says he's instead contemplating an indoor bee hive.

He's thrilled by the possibilities offered by the deep south city neighborhood, which he already frequents thanks, in part, to a membership at the Carondelet YMCA. "It has the feel of what I imagine Tower Grove East must have felt like ten or fifteen years ago," he says. "I really like the neighborhood. It seems like a nice fit."