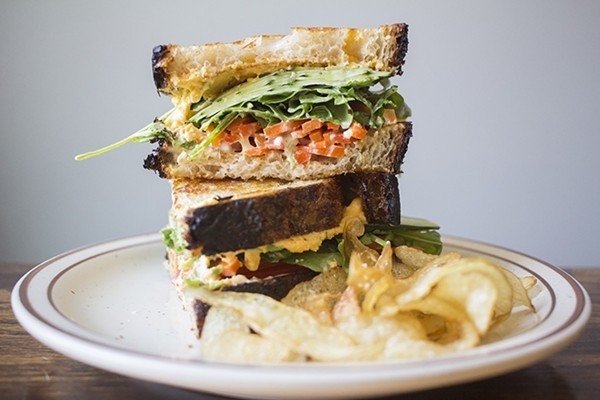 A little over a year after it moved to greatly expanded digs a few doors down from its original location, Rise Coffee House is growing again — the beloved Grove spot is taking over the cafe at the Contemporary Art Museum (3750 Washington Boulevard, 314-535-4660).

Rise will make its debut at the museum on May 11. The museum's current cafe ceases operations on March 30.

(And of course, it goes without saying, the Grove location will continue to operate as well.)

Aaron Johnson, who owns Rise, says the museum approached him about taking over the space a few months ago — and, as a longtime fan and patron, he said he was immediately interested. "We spent a few months going back and forth, but I loved the challenge of taking on that space and improving it," he says. "The coffee is what we're good at, the food is what we're good at, and they've been focused on creating a community space for a while now. It felt like it would be a good fit."

Johnson says Rise will keep the same hours as the museum, offering many of the best-loved dishes on the Grove location, which include baked goods, sandwiches and soups. Owing to kitchen limitations, not everything translates — "there's no way to cook eggs to order there," Johnson notes — but most Rise favorites will be on offer. "I can promise the avocado toast will be there," Johnson says, laughing. They'll also be baking on site daily.

Oh, and they'll also have your boozy brunch covered; Johnson says there is a liquor license, and they intend to use it.

Johnson says he's thrilled that the cafe's grand opening will coincide with the opening of Amy Sherald's first solo show. The artist gained international attention for her portrait of Michelle Obama earlier this year.

Editor's note: We tweaked a sentence and added a line to make it clear the Grove location of Rise is not closing; the museum location will be its second outpost, not a replacement. We also edited the post to add the correct date the current cafe in CAM will close. We apologize for any confusion.