Mauhaus Celebrates 100th Adoption — and 16 Months as a Cat Cafe

Sixteen months ago, the St. Louis welcomed its first cat cafe, Mauhaus Cat Cafe and Lounge (3101 Sutton Boulevard, Maplewood; 314-384-2287). And on Sunday, Mauhaus celebrated a huge milestone — its 100th cat adopted out to a forever home.

But it wasn't all joy as Inca left the cafe with her beaming new owner. In some ways, says co-owner Ben Triola, it was bittersweet.

"She's the kind of cat you love when you really get to know her," he says. "She's kind of a troublemaker, in the best possible way."

Indeed, Triola admits that the black-and-white charmer's nine-month stay might have been a bit shorter, had not the cafe's manager fallen head over heels.

"Our cat manager is already very, very selective. We don't just adopt cats willy-nilly," Triola explains. "You'll see cat cafes open far less than a year who've adopted more than 100 cats. But we don't do same-day adoptions, and we do background checks. You have to be a pretty awesome person to get one of our cats. And being that this is our manager's favorite cat ... we're confident she's going to a truly awesome home." 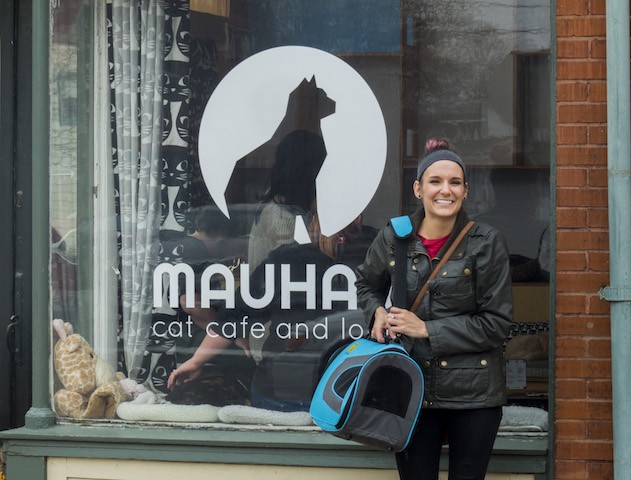 Mauhaus has been jam-packed since almost the first day it opened. While visitors no longer need to book their appointments a full month in advance, Triola admits that it can still get pretty nuts on the weekends — and with waits that can stretch to several hours, the cafe continues to encourage reservations. He says, "We hate having to turn people away."

But it's not just about volume, or about selling pastries and coffee and letting cat lovers visit with the lovely residents. Co-owners Triola and Dana Huth, as well as their staff, are focused on a mission: to save cats from death's door.

All the cats they adopt out come from Stray Haven Rescue, Triola says. And Stray Haven adopts all its cats from kill shelters. He says, "These are cats who are literally next in line to be killed. They get a second chance because Stray Haven chooses them." And on Mauhaus' website and in person, the cats get a spotlight — and a direct connection with feline fanciers just waiting to fall in love.

It can be a literal life saver. Triola recalls Cowboy, whom he describes as "a humongous tan cat." Such a big guy might not be an easy sell at a shelter; at the cat cafe, his sweet personality allowed him to get past that first impression. "He would have been euthanized," Triola says. Instead, these days, Cowboy is purring happily in his new home. (Get a look at the 100 cats Mauhaus has adopted out in its new book, now available for pre-order.)

Still, not every cat who's come to Mauhaus has been adopted out. Two of the first kitties to come to the cat cafe were a sibling pair, Taylor and Lorelei. And in this case, it wasn't just the cat manager who was smitten. The co-owners lost their hearts.

"Dana and I both fell in love and said, 'We've got to keep them,'" Triola admits. The pair remain more than a year later — the "resident cats" in a cafe with no small amount of turnover.