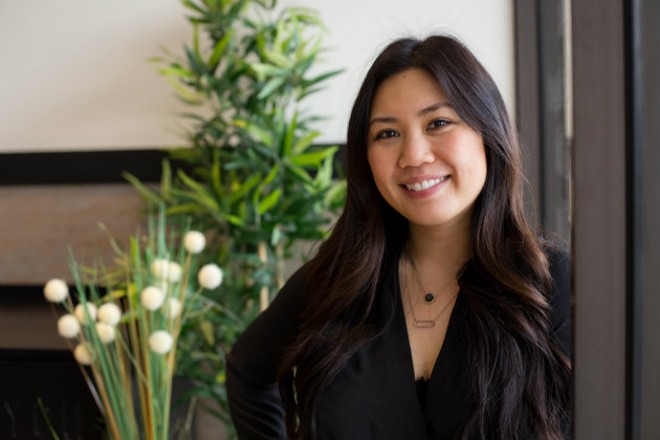 When Julie Truong made the decision to quit her fashion job and return to St. Louis to open DD Mau (11982 Dorsett Road, Maryland Heights; 314-942-2300), she thought she'd be dropping a bombshell on her friends and family. Their response? "We saw this coming for years."

Looking back, Truong can see why they had such a reaction. From an early age, she was always in the kitchen watching her mother and father prepare traditional Vietnamese dishes for everything from weeknight dinners to celebrations with the extended family. As owners of a chop suey restaurant, they also exposed Truong to the business from an early age — yet she swore she did not want to enter the industry, no matter how much she loved cooking.

For years, Truong made good on that promise. She moved from St. Louis to Los Angeles after high school to attend the Fashion Institute of Design and Management, or FIDM. She returned to Missouri following FIDM to finish her business degree at Mizzou, then moved to Chicago after graduation to start a dream job with Levi's.

However, throughout her studies, and even while climbing the ladder in her chosen career, Truong kept cooking.

"I was always cooking for my friends in Los Angeles, making vegetarian hot-and-sour soup or whatever they wanted," Truong recalls. "When I was at Mizzou, my friends would ask me to do the same. No matter where I went, it seemed like I was always the designated cook."

While she was working in Chicago, Truong spent almost all of her free time cooking and going out to eat, dreaming of what she would do if she had a restaurant of her own. The more she talked with friends and family about her vision, the more it became clear that she had much more passion for food than fashion.

"Every one of my friends and family knew that it was for me," Truong says of the restaurant industry. "They were just happy I was taking a risk and doing something I love."

Truong left Chicago last year and got to work making her vision for a healthy, fast-casual Vietnamese eatery a reality. That restaurant, DD Mau, opened in Maryland Heights on February 7. It's a combination of several elements she borrowed from the restaurants she would frequent in Chicago. Though DD Mau is anchored by traditional Vietnamese cooking, Truong has updated the presentation and concept, turning it into a modern, fast-casual restaurant in the spirit of places like Chipotle, Garbanzo or Mod Pizza.

Opening her first restaurant has not been easy, but Truong has never felt an ounce of regret about her decision to change careers and follow her passion. And if she ever needs proof that she is on the right track, she just looks at the journal she kept while she was in Chicago, which contains note after note about food, service and the business. Only someone destined to be a restaurateur would be so fastidious.

"It's my book of ideas about everything I want to bring to St. Louis," Truong explains. "My sister asks what else is in there!"

Truong took a break from DD Mau's kitchen to share her thoughts on the St. Louis restaurant scene, why the city needs a few good rooftops and why it's a dangerous idea to send her to the grocery store when she's hungry.

What is one thing people don’t know about you that you wish they did?
Nothing, because then I wouldn’t be such a surprise!

What daily ritual is non-negotiable for you?
I lay in bed for fifteen minutes before I actually get up and start my day.

If you could have any superpower, what would it be?
To quickly find a marketing team member!

What is the most positive thing in food, wine or cocktails that you’ve noticed in St. Louis over the past year?
Since I’ve moved back to St.Louis I’ve seen a movement with restaurants supporting local farms — which is great. Farm-to-table restaurants are beginning to rise. I’ve also seen a movement of restaurants towards vegans and vegetarians. Very awesome concepts in St. Louis which make the food scene here an attraction.

What is something missing in the local food, wine or cocktail scene that you’d like to see?
I’d like to see more cocktail lounges that are trendy, modern and intimate. Places where they focus on unique and whimsical drinks, along with creating a nice atmosphere — somewhere fun where you can hang out with a nice view of the city. I’d also like to see dessert-focused spots that are open late, catering to everyone.

Who is your St. Louis food crush?
Clementine’s Creamery. I’m obsessed with their Thai and Pandan ice cream. Going weekly!

Which ingredient is most representative of your personality?
Chile peppers — small but mighty!

Name an ingredient never allowed in your restaurant.
Negativity.

What is your after-work hangout?
Is this even a question? Haha!

What’s your food or beverage guilty pleasure?
For food, it's gooey butter gelato from Whole Foods with lots of fresh berries. I also love snacks. I can never leave a store without buying a snack. Salty snacks are my favorite, especially chips. If it’s new, I’ll always buy it to try! Beverage-wise, you can never go wrong with Ketel and soda with two limes.

What would be your last meal on earth?
Fried chicken from anywhere. It has to be crispy and full of flavor, and it must have Tabasco hot sauce.