St. Louis Is the 12th Friendliest Food Truck City in the U.S.

Out of 20 U.S. cities ranked in the Chamber of Commerce Food Truck Nation project, St. Louis lands at No. 12 for how easy it is for food trucks to obtain a permit, comply with restrictions and simply operate.

Where St. Louis falls is the restrictions. Compared to other cities, the report says, these are some high restrictions. St. Louis food trucks cannot vend within twenty feet of a restaurant or "in parks and places where people convene," as one local food truck owner describes it in the report. Food trucks in St. Louis are also restricted to a 10 p.m. curfew and on top of that, they're required to flash a signal to indicate when sales are being transacted. The report says that's unusual among the cities surveyed.

And the area is famously fractured in governance. There are more than 100 municipalities in the St. Louis area, all of which have their own fees and permitting processes, the report notes. Cross the line into the suburbs and the rules may change, drastically.

But it's cheap enough to get your foot in the door. The report estimates local startup fees of around $1,204, and St. Louis has an easily navigable city website for understanding the startup process.

See our overall report card below: 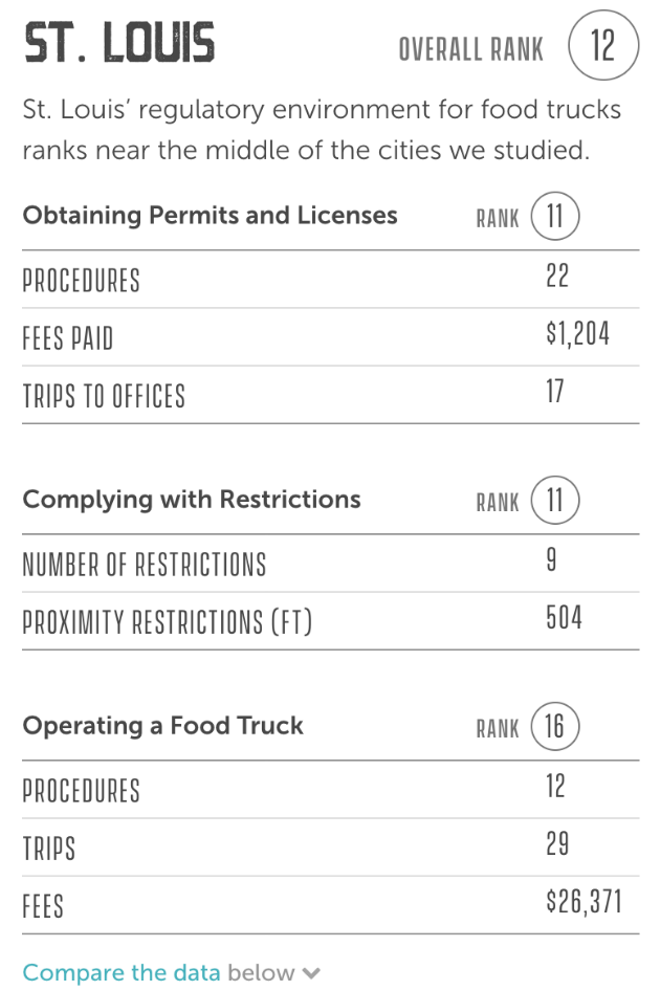 Why do food trucks matter to us, other than providing yummy eats? The study says a city's openness to food trucks means openness to entrepreneurs. The Chamber of Commerce gives an example of Portland (ranked No. 1), and Chicago (ranked No. 13, just after St. Louis) and how their rankings affect businesses and, it argues, even drive population growth.

Portland's breezy food truck experience has earned it 8.2 percent business sector growth from 2011 to 2015, the report finds. Chicago, with its tighter regulations, showed just 4.7 percent growth in the same period.

Portland also notched much greater population growth, as shown in the graphic below: 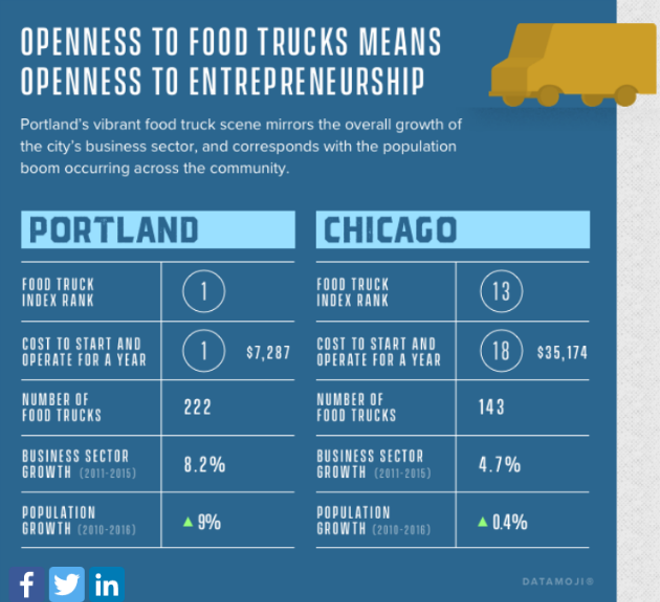 Overall, food trucks continue to increase across the nation. In 2017, there were active food trucks in more than 300 U.S. cities. Collectively, they generated $2.7 billion in revenue, the report finds.

St. Louis is one of the twenty most active food truck cities in the U.S., the Chamber of Commerce says, which is why we are included in the study.