On Tuesday, Alpha Brewing Co. created a Facebook invite for the grand opening of its new brewery in south city. But the event, titled "Rock Hard Opening," used language suggesting it would be a largely male event.

"We are open for business this Friday," the evite read. "So when your girlfriend is washing her hair on Friday night, come have a beer with us."

The wet hair theme continued on the brewery's website, with a video showing a woman appearing to derive Herbal Essences-style pleasure from being doused in a glass of beer.

"It's not for everyone," the caption read.

The reaction was swift, with critical comments posted in beer forums as well as on the invitation itself. A few people called out the brewery on their personal social media pages.

"Rock hard and girls should be washing their hair," one man wrote on Facebook. "Stay bro Alpha, stay bro."

The brewery has since deleted the invitation. And instead of a video of a woman beaming in a beer shower, Alpha Brewing Co.'s website now opens to a still image, apparently from the same setup, showing a glass of beer in the process of spilling. It's impossible to tell from the cropping the gender of the person it's spilling on.

See the difference below: 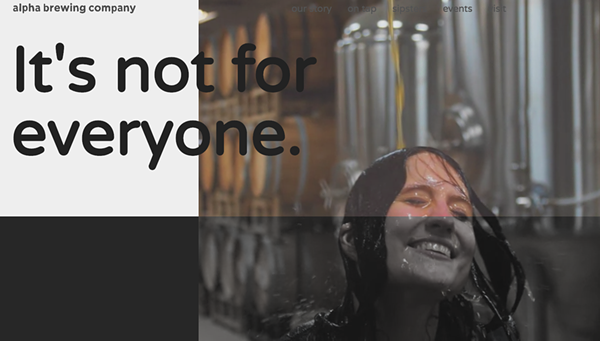 Alpha did not respond to our email seeking comment yesterday. The company's voice mail indicated it is not checked with any frequency and recommended contacting the brewery by email instead.

The brewery opened downtown in 2013, but quickly outgrew its space. Last year, it announced it would close, along with plans to open a big new brewery and tap room, complete with a kitchen, on Fyler and Morganford in Tower Grove South. That venture is set to open to the public Friday.

But if brewery needs to tamp down controversy over its invitation for that event, it comes to the task with some experience. Five years ago, Alpha head brewer Derrick Langeneckert stirred up a nine-hour tweetstorm after calling out Chicago's craft beer presence. At one point, Langeneckert drew more ire by tweeting a photo of his then-fiancee. "Ask our head brewers fiancée about beer, too!" he wrote in reply to another brewer. "Well trained in the art of beer."

Derision was swift. "Really? 'Hey I know a cute girl' Thanks; doing our industry proud," one Chicago brewer wrote in response.

Acknowledging just how many feathers he'd ruffled, Langeneckert would later apologize in an open letter to the entire St. Louis beer scene.

In July 2015, the brewery again found itself in the hot seat after announcing plans to release a beer called Submission, with a label depicting a pig in a burka. Langeneckert decided to scrap the beer, although he noted that it would have been part of a series of beers mocking world religions — and that no one batted an eyelash when Alpha took on the pope (and Scientology).

Asked why trouble seemed to follow him, the then-28-year-old just laughed. "Because I'm young and stupid," he said.