Nixta's New Chef, Alex Henry, Has Stepped Into a Tough Job With Confidence 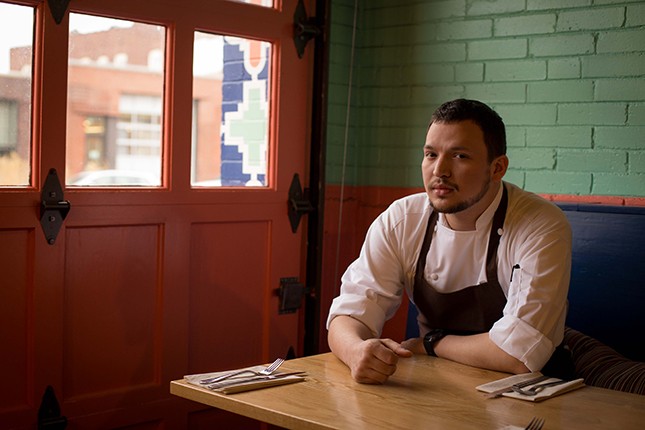 Alex Henry left his hometown of Merida, Mexico, when he was a little kid, so many of his memories of the place are not so clear. However, the new executive chef at Nixta (1621 Tower Grove Avenue, 314-899-9000) admits the most vivid ones all involve food.

"I remember hanging out with my grandmother in her kitchen in Merida," Henry recalls. "She was a really good traditional cook. Also, when we would go out to eat, there was always some part of the kitchen that was visible — maybe it was women making tamales on the streets outside. Things like that just crept into my head and made me realize how much I loved food and cooking."

Though he moved to Missouri at a young age, Henry had more than enough experiences to develop a passion for his home country's cooking. Every year, he and his family would spend their summers in Mexico, visiting with relatives and soaking up the local environs. Whether going out to eat or dining at relatives' homes, food was central to their visits, and Henry decided to pursue cooking as a profession.

Now 28, Henry enrolled in the culinary program at St. Louis Community College - Forest Park straight out of high school where he learned the fundamentals. However, he also developed his passion outside of the classroom, working for chef Robert Uyemura (now of Local Chef Kitchen) at Yia Yia's in Chesterfield. Uyemura instilled in Henry the importance of sustainability in his cooking — well before the term was trendy. Something about that spoke to Henry, helping him see that his job was not only to cook food, but to do so in as conscientious a manner as possible.

"The restaurant industry is hard, and there have been times when I've wondered if I should do it as a career," Henry says. "But I feel that this is a chance to make an impact, even if it's small."

Henry continued to rise in the culinary field, working in kitchens around town before ending up as one of the main butchers at Vicia. Though he loved his job and believed in the restaurant, he heard that Nixta's owner Ben Poremba was hiring after the departure of opening chef Tello Carreon. Terrified, he made a call.

"I had always wanted to cook Mexican food at a higher level, and I felt like this was my shot," Henry explains. "I was scared to make the call, but I knew I would kick my shot if I didn't go for it."

Henry found a receptive Poremba on the other end of the line, and the two met to discuss their vision for the restaurant. Though the restaurant was immensely successful, neither chef wanted merely to continue with business as usual, feeling that it was important for a new chef to make the place his own. After a few conversations, it was clear to both that new chef should be Henry.

Henry intentionally took things slowly when he came on board, feeling that it was important to understand how things worked and to earn the respect of his colleagues. He admits it was intimidating taking over such an acclaimed kitchen and was conscious there would be criticism; it's why he felt it was important to put his own stamp on the restaurant.

"I wanted to take some of Tello's dishes off the menu out of respect for him as a chef," Henry explains. "I didn't think it was right to be taking his creativity. At first it was a little disconcerting, but now I am getting positive feedback."

Henry's menu is a love song to Merida, a culinary tradition he describes as having more in common with other Central American countries than with central Mexico. Tamales are central to the cooking, though they don't often look like what Americans have in mind when they think of the dish. Chicken is rarely used; instead, turkey is the poultry go-to. Seafood plays a prominent role, as do bright citrusy flavors.

"We try to do things seasonally, but I can't wait for spring," Henry laughs.

Henry is humbled that Poremba had such faith in him and marvels at how quickly he handed him the reins. Judging from the response he has been getting, Poremba made the right call.

"He's letting me really go with my creativity," Henry says. "Right now, the kitchen is as close as it will ever be to being mine."

Henry took a break to share his thoughts on the St. Louis food and beverage scene, why you'll find him out on his back porch no matter what the weather, and the pit stop he often takes on the way home from work.

What is one thing people don’t know about you that you wish they did?
Even though my name is Alex Henry, I am from Yucatan Mexico, so I might know a little bit about the food I am trying to create.

What daily ritual is non-negotiable for you?
Drinking a cup of either tea or coffee outside on my porch, regardless of the weather.

If you could have any superpower, what would it be?
I would want the ability to clean up and decontaminate the environment.

What is the most positive thing in food, wine or cocktails that you’ve noticed in St. Louis over the past year?
A continuing move toward using using more local and sustainable products.

What is something missing in the local food, wine or cocktail scene that you’d like to see?
I'd like to see a greater use of foraged ingredients, especially those native to the region that may have been forgotten over time.

Who is your St. Louis food crush?
That's tough because there are so many good chefs out there, but if I had to pick it would be Michael and Tara Gallina. I've never seen a restaurant run with as much precision and intent behind every action as Vicia.

Who’s the one person to watch right now in the St. Louis dining scene?
David Bohlen of Bohlen Family Farms, because he grows some of the best produce around, and he always has a few new and exciting crops up his sleeve.

Which ingredient is most representative of your personality?
Corn, because I use it in all its forms somewhere in my menu. It's the driving force among all of the ingredients that I use.

If you weren’t working in the restaurant business, what would you be doing?
I would be a professional scuba diver or park ranger — or any job where I could be outdoors and enjoy nature all the time.

Name an ingredient never allowed in your restaurant.
Chicken, because I have the availability of high-quality local turkey, which is a better bird in my opinion, and turkeys are always a native ingredient.

What is your after-work hangout?
Typically home, to try to rest up for the next day.

What’s your food or beverage guilty pleasure?
Sometimes on my way home I like to pick up a few doughnuts from John's Donuts because they are coming out fresh around that time — especially the apple fritters.

What would be your last meal on earth?
A whole fried fish (probably a hogfish or snapper) smothered in pickled red onions over rice and beans and a glass of agua de jamaica.