Guerilla Street Food Is Now Open on Delmar, No. 4 for a Red-Hot Concept

When Joel Crespo and Brian Hardesty first launched Guerrilla Street Food, they included a numeral "1" in its branding. "We knew it was the first of many," Crespo says, laughing a bit at their confidence.

But even they had no idea just how much of a juggernaut the Filipino-inspired concept would become in a few short years. From that one truck in 2011, Guerrilla Street Food has grown to include restaurants, a food service program inside 2nd Shift Brewery and a similar arrangement slated for the Tropical Liqueurs' location opening this spring in the Grove. Oh, and that truck is still truckin'.

With the truck as No. 1, today's opening — their second stand-alone brick-and-mortar, located at 6120 Delmar Boulevard, practically across the street from the Pageant — was supposed to be No. 5. But the eatery came together so quickly, Crespo says, it actually lapped the Trops project. "We basically did everything we needed to do to this space in February," he marvels.

You'd never know it to look at the property today. What used to be a Pita Pit franchise now looks both cool and utterly distinctive. Walk in past the bar and order at the counter all the way in the back of the sunny, wide-open room. Then they'll bring your food to the table — a table that just so happens to be covered with a custom-made design inspired by traditional Filipino tribal tattoos. (Credit Long Beach tattoo artist Aleks Figueroa.) On one wall is another piece of custom art, a mural by Kristian Kabuay of the San Francisco Bay Area. It's inspired by the ancient Philippine script baybayin.

As you might guess based on that attention to detail, the Guerrilla Street Food menu pays genuine respect to the Philippines' culinary traditions. But that doesn't translate to being slavishly "authentic." Instead, the restaurant is serving a modern riff on the age-old cuisine, one they were startled to learn on a recent trip to the archipelago is very much in step with the way modern Filipinos are eating. 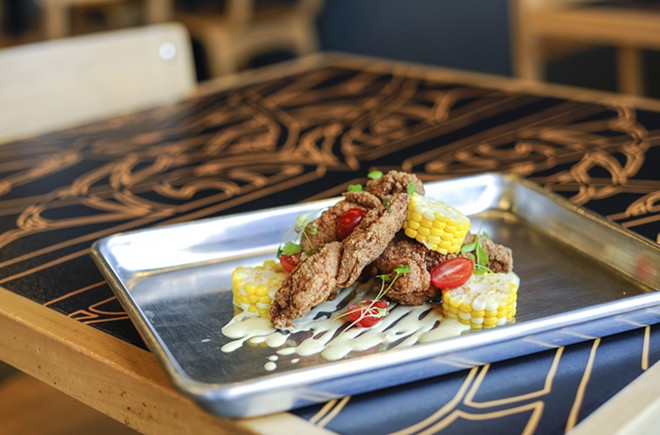 "Brian and I turned to each other and said, 'We could do Guerrilla Street Food here exactly like we're doing it in St. Louis here and they'd be on board," Crespo marvels of the trip. "That was a really cool affirmation that we're on the right track."

Each of the Guerrilla Street Food locations has a different menu, thanks in part to each having a real chef, not just someone slavishly copying the original menu. The restaurant's greatest hits are here (chicken adobo, the "Flying Pig"), but so are some recipes unique to chef Heidi Hamamura and the Delmar team. 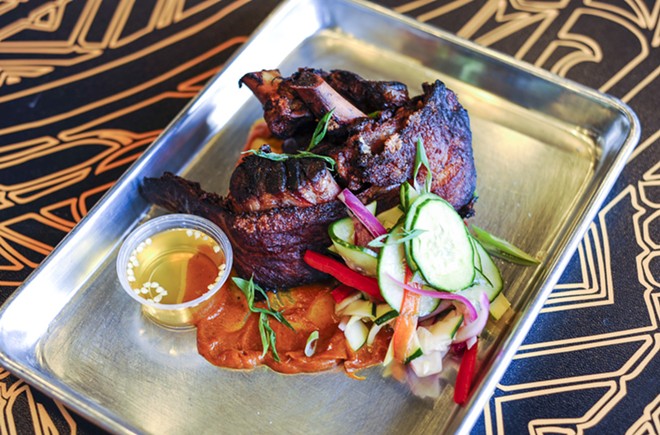 Hardesty says he's particularly proud of the sour fried chicken, which puts a Filipino spin on the heartland favorite. Inspired in part by the beloved Philippine soup sinigang, it brings the acid flavors of calamansi and tamarind to what's traditionally spicy. "Instead of hot, it's all sour," he promises.

Other newcomers include the "Crispy Pata," a braised and fried pork shank served with a garlic confit puree, and kinilaw, an appetizer featuring scallops, watermelon radish, green mango and coconut milk vinegar. Add a side of the coconut-infused cornbread for just $2; it's terrific.

Prices are incredibly reasonable, especially considering the skill and fresh ingredients that go into these dishes. Nothing on the menu is over $12; most things are under $10.

Guerilla Street Food's Delmar location will be open from 11 a.m. to midnight Monday through Saturday and 11 a.m. to 10 p.m. on Sunday. As yet there is no alcohol, although they intend to get a license for beer and wine. For now, you can choose from a variety of intriguing beverages, including a juice made with calamansi, hibiscus ice tea and a sparkling cucumber water.

Editor's note: We updated this story after publication to clarify the restaurant's interest in serving alcohol. While it does not currently offer booze, the owners plan to get a license for beer and wine.