Dogtown Soul, Set to Open This Weekend, Returns a Native Chef to His Roots 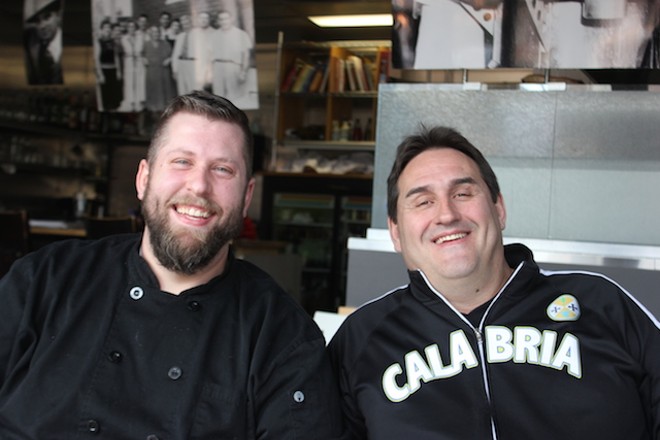 Pepe Kehm is returning to Dogtown.

The prolific restaurateur says he will soon open a restaurant called Dogtown Soul within Arena Bar (5760 West Park Avenue), adding food service to a bar that's gone without it in recent years and serving up "twisted classics and hoodie goodies." JJ Jaggers, a recent transplant from Memphis, will serve as chef for the venture.

Kehm's family has a long history in Dogtown. In fact, his late brother Michael was Arena Bar's original owner. Before that, it was a grocery run by his grandmother; Kehm's mother grew up next door. Kehm himself ran several restaurants in the neighborhood, including Corky's and Spaghetteria Mama Mia.

Most recently, Kehm opened the well-reviewed Peno Italian Soul Food in Clayton, which continues to do brisk business. But he's looking forward to a return to his roots. "For the most part, I really have stayed in my neighborhood when opening my restaurants," he says.

Kehm and Jaggers intend to open the restaurant for one day only in March — this Saturday, March 17, a day when Dogtown will be filled with revelers looking for something to eat. They'll serve breakfast from 8 to 10 a.m. and then a plated lunch and Irish stew from 10 a.m. to 5 p.m. All the day's proceeds, they say, will be donated to the Denny Fahy Foundation, aiding St. James the Greater School.

One month later, on April 20, they plan to open for good, kicking things off with a grand 4/20 celebration.

While the menu is still being fine-tuned, the pair envision serving a half-dozen bar favorites that put a twist on soul food. "Snitch Puppies ('cause everyone neighborhood has one!)" will be made with cornmeal, jalapeno and a touch of Provel, while the "St. Louis Hoosier" is an open-faced sandwich topped with chopped pork steak, hard-boiled egg, onion, pickles and Provel.

They also intend to offer Kehm's trademark wedge salad, which he pioneered at Corky's more than a decade ago, a burger and a daily lunch special, with everything from meatloaf to catfish or jack salmon.

Oh, and for dessert? Jaggers plans to serve his "Memphis Mafia," a peanut butter and jelly bread pudding. It sounds like it might be heavy, but it's actually heavenly.

Kehm grew up eating both his family's Sicilian food and the soul food cooked by his mother's best friend; with every restaurant he opens, he says, he's playing with those influences. Jaggers' Southern roots have only swung him further in a direction that he was already dabbling in.

The set-up is one that's becoming increasingly common within St. Louis bars, with the food concept owned separately from the bar one, and then embedded within (think: Mac's Local Eats at Tamm Avenue Grill, the Cut at Fortune Teller Bar). "A lot of people open taverns and say, 'We're going to get rich on the bar. But you have to have the food to run with the liquor," Kehm says. And that he knows he can provide. "This the right partnership, the right location, the right food style."

As for Jaggers, he says he can't wait to start cooking at Arena Bar. "I fell in love with it instantly," he says. "It reminded me of a lot of places in Memphis."