Ex Cop Donut Shop Is in Trouble With the Law 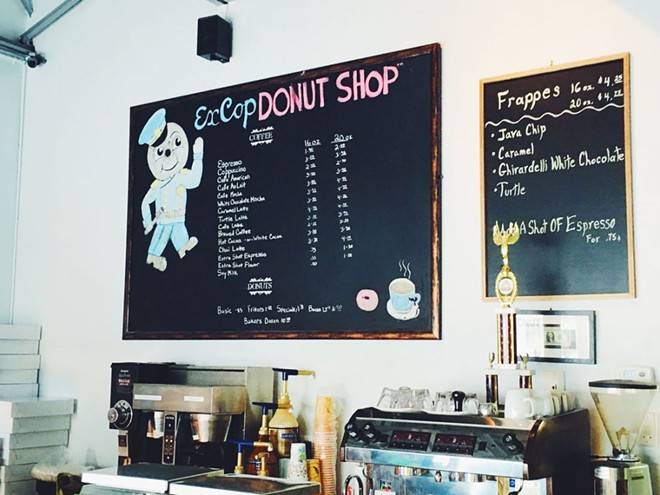 Francesco "Frank" Loforte, who is indeed an ex St. Louis city cop, is wanted on a criminal charge of operating his popular Oakville bakery without a retail license, according to court records. He is also facing a civil judgment for stiffing a supplier out of thousands of dollars.

Ex Cop Donut Shop was the target of a Missouri Department of Revenue investigation last year. The department had yanked the shop's retail license in November 2016, records show. It also filed at least four liens totaling more than $2,000 in county court in 2017.

On two days in May 2017, a supervisory special agent with the revenue department visited the shop in person and found it was still open for business, even without the license, court records say. A misdemeanor charge of making sales at retail without a license was filed in September 2017 by an assistant St. Louis County prosecutor, and a judge issued a warrant in October when Loforte did not show up for court.

Loforte did not want to talk when reached by phone on Tuesday.

"Why would anyone need to know about my personal business?" he asked. He then said he had provided free doughnut holes for Riverfront Times events. Told that reporters don't handle events, he hung up.

The case is still pending, a spokesman for the prosecuting attorney confirmed. And Ex Cop Donut remains open for business and continues to turn out tasty doughnuts. The shop's imaginative creations — the maple-bacon long john is particularly popular — have earned it critical praise in St. Louis media, including a few raves here at the Riverfront Times.

The coverage usually mentions that Loforte and his wife, Linda, are both former city police officers, who decided to quit chasing crooks in favor of frying dough. The catchy origin story, however, leaves out a troubling bit of background: The state permanently revoked Loforte's law enforcement license after he was found responsible for "gross misconduct."

Now 53 years old, Loforte and another officer responded in July 2001 to the scene of a burning car. The engine had caught fire, and the car's owner ran inside a relative's house to call for help, according to records from a state hearing.

Once the fire was out, Loforte allegedly stole a gym bag containing a .22-caliber Beretta pistol out of the trunk and put it in his patrol car. The other officer and a firefighter later told investigators they saw him with the bag. According to records of the state Administrative Hearing Commission, Loforte denied he had even seen the bag.

The commission was not buying it.

"We conclude that Loforte's actions in taking property and lying about it constitute gross misconduct indicating an inability to function as a peace officer," the commission wrote in a 2002 recommendation to discipline his license.

Loforte was never criminally prosecuted, but his police career was over. He had joined the force in January 1994 and his tenure ended in September 2001, about two months after the car fire, according to police records.

His second act as a doughnut maker has run into trouble, too. In addition to the Department of Revenue action, Bono Burns Distribution sued Ex Cop Donut last October for breach of contract. The Maplewood-based bakery and brewery distributor claimed that Loforte had run up a bill of $12,894 since late 2016. In December 2017, a judgement was granted for the amount plus interest and attorney fees, increasing the total to $15,783.

Following the judgment, the company sought a garnishment from Ex Cop's cash flow. The total amount owed has now surpassed $16,000, according to documents filed in late February. A Bono Burns official declined to comment.