Kevin Pellegrino Is Sharpening Knives For Chefs Around the World in St. Louis 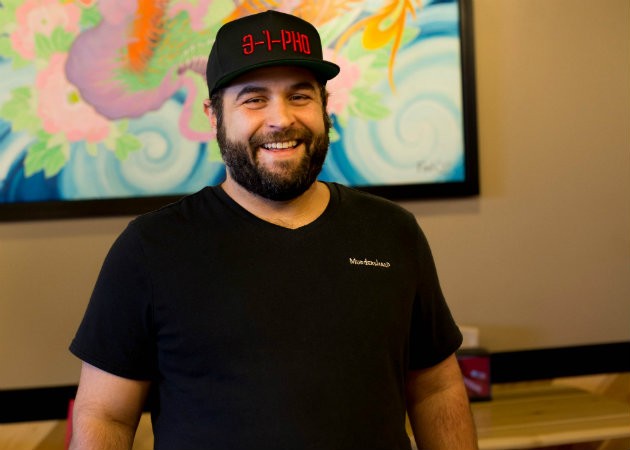 Kevin Pellegrino's tone gets serious when he talks about knives. "It started as an obsession and it's become a ritual," the Nudo House (11423 Olive Boulevard, Creve Coeur; 314-274-8046) chef says of his knife care protocols. "When you learn how to sharpen and think you are getting good, you're not. I've been doing this for about five years now and didn't really know what I was doing until about two years ago."

Pellegrino may not have thought he knew what he was doing, but others did, and they took notice. In the last few years, the Florida native has garnered worldwide acclaim for his skills — so much, in fact, that chefs from all over the world send them their knives for sharpening. He's even had sushi chefs from Japan seek out his expertise.

However, it took Pellegrino years of being in the kitchen before he developed this particular set. He started out in the industry as a high school kid in need of a job. After graduating, he casually attended community college, but dropped out to work in restaurants full-time while he figured out what he wanted to do with his life.

Around that time, his parents moved from Florida to Colorado. Pellegrino decided to stay behind, but he quickly realized that doing so meant he would have to get serious about his life direction.

"I said to myself, 'OK, I need to take a little more note of what I am doing while I am at work to better myself,'" Pellegrino explains. "That's when I decided I needed to figure out a way to advance in this business."

When he was around 21, Pellegrino moved to St. Louis and took jobs managing the kitchen at CJ Mugg's in Webster Groves and working the line at Trattoria Marcella. He eventually made his way to Annie Gunn's, where he got an education not only in high-end cuisine, but one in a high-volume setting.

"It's the busiest restaurant in town. It's unbelievable," Pellegrino says. "I estimate I cooked probably 100,000 steaks in the four years I worked there. But that's where I learned how to make sure things run fluidly through service. There is no amount of business that could scare me off after that."

Pellegrino's big break into the knife world would come courtesy of Five Bistro, chef Anthony Devoti's farm-to-table restaurant. While working there, he was empowered to ask questions about every aspect of the business and grow as a chef. He was also shown how to properly take care of his tools.

"That's where my obsession began," Pellegrino explains. "Tony [Devoti] let me sharpen and butcher everything, and I realized how nice it was to be able to take care of my own tools and keep them sharp."

The more Pellegrino learned about knives, the more he realized that he had a passion for that aspect of the business. He began teaching himself techniques and experimenting through trial and error, honing his skills and developing a sense of camaraderie with an online community of knife enthusiasts he didn't know existed before stumbling upon it.

"Never in a million years did I realize there was this knife community out there," Pellegrino says. "I started posting photos of what I was doing on Instagram, and the next thing I knew, I had 2,500 followers. I couldn't believe that many people were into it."

Through Instagram, Pellegrino began getting requests for him to sharpen knives from around the globe — a phenomenon that was so inexplicable to him he didn't even charge people for the first few years. Now, his reputation has grown enough that he is listed on a site for Japanese knives as a specialty sharpener. He also offers his services to some of the chefs around town.

"What I do is a pretty boutique thing," he explains. "It takes me about four to six hours to sharpen a knife, so the people who want that type of work done aren't just the everyday users."

Pellegrino admits that his passion has become an obsession. On his time off work, he all but lives in his basement, poring over YouTube videos, asking questions of others in his field, and of course, sharpening.

"Once you've felt what it is like to cut with one of these, it's like a drug," Pellegrino says. "It's my happy place."

Pellegrino took a break from sharpening to share his thoughts on the St. Louis food and beverage scene, his after-work buddies and the joy of cutting.

What is one thing people don’t know about you that you wish they did?
I don't have a good answer for this because I'm only really a fan of people that one me knowing things about me.

What daily ritual is non-negotiable for you?
Cutting something.

If you could have any superpower, what would it be?
Making people disappear.

Who is your St. Louis food crush?
My wife, Britt Pellegrino.

Who’s the one person to watch right now in the St. Louis dining scene?
Nick Bognar [of Nippon Tei]. He's getting some of the best fish I've had in St. Louis.

If you weren’t working in the restaurant business, what would you be doing?
Sharpening knives in a knife shop somewhere.

Name an ingredient never allowed in your restaurant.
All ingredients are welcome.

What is your after-work hangout?
I don't go out after work — straight home to work on knives or hang with my pretty lady and my handsome dog.

What’s your food or beverage guilty pleasure?
I like all food that isn't good for you, fried chicken and stuff like that.