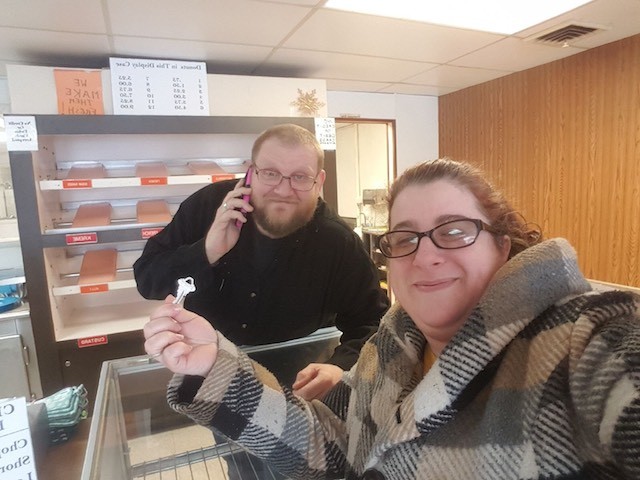 All hail! Donut-King (662 1st Capitol Dr​ive​,​ St. Charles;​ 636-723-7680) will rise again, thanks to new owners Paul and Alissa Thoenen, who are taking up the mantle of the beloved shop and breathing new life into it after its surprise closure last month. Paul will run the shop while Alissa, a special education teacher, will help out and handle social media.

The divey donut shop was a cult favorite in St. Charles for close to five decades. It was best-known for its “Chop Suey” donut, a monstrous cinnamon bun that defied expectations. Before announcing its sudden closure last month, the original owner of Donut-King floated the idea of selling his shop to a few regular customers who had expressed interest in buying. But, Alissa says, most of their pitches fell flat. “I think people were being pretty picky,” she said. “Somebody wanted to move locations, somebody else wanted to change the equipment, but we wanted to just keep Donut-King the same—their recipes, their product—that was their selling point to us.”

After an agreement was made, the couple were given the green light and began working on the necessary paperwork. Alissa made a Facebook announcement that received more than 400 shares and garnered 1,000 likes for the Donut-King page. “The response has just been amazing,” she said.

Paul Thoenen is a long-time chef with a history in the restaurant trade and has always imagined owning his own business. “I think for every person who works in the restaurant industry, it's their dream to have their own place, but I wasn’t looking for a donut shop. I’m just excited to keep this tradition alive.” The original owner plans to stay on board for a short time to show Paul how to make everything from the old menu. “The main factor is just to learn their secrets and their traditions.”

There’s just one caveat — Paul has never made donuts before. But the first-time business owner is ready for a new challenge. “Going into this doesn’t scare me at all, because I just need to learn everything I can about making donuts and I know I can do it.”

His wife is his biggest supporter. “I married him because of his blueberry muffins,” she boasts.

While Paul will focus on bringing back Donut-King in all its original donut glory, in time he hopes to get the swing of the process and try a few surprises of his own. “In the future, we’ll probably add some new items, but initially I just want to open up the door and get to selling them again. Once we focus on that, then we’ll see what else we can we do.”

Probably one of the boldest changes they plan to implement? Credit Cards. Look out, St. Charles.

The new owners hope to have the shop open again by the end of March.