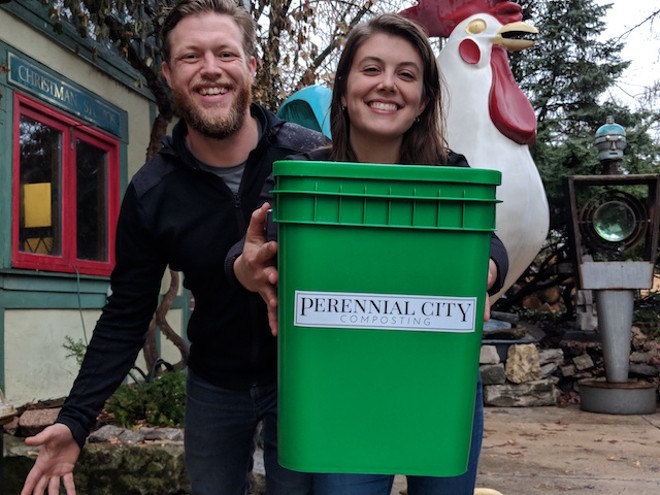 For the last five years, Tim Kiefer and Beth Grollmes-Kiefer have been, indirectly, in the business of helping people create waste — getting them food via Kiefer's bicycle-driven food delivery business the Food Pedaler. Now they want to come take the table scraps away and convert them to compost.

The couple's new business, Perennial City Composting, launched last month. It promises to provide a subscription-based composting service to anyone who lives in St. Louis, University City and Clayton. If you pay their monthly fee, they'll provide you with a four-gallon composting bucket — and pick up the materials inside on a weekly or bi-weekly basis, depending on which plan you choose. They'll even provide coffee chaff to keep the compost bucket smelling OK between pickups.

"If you keep the bucket in your house, you can sprinkle some on top and it's a really pleasant coffee aroma," Grollmes-Kiefer explains. And as for the bucket you'll get, she promises, "I think it's really cute. I wouldn't be ashamed to put it on my kitchen counter!"

A native of Topeka, Kansas, Grollmes-Kiefer moved to St. Louis to attend Saint Louis University. When she met Kiefer, a native of St. Louis County, he'd just launched the Food Pedaler — and proved a passionate ambassador for his hometown. He sold her on the city, and eventually the business he'd founded.

Now he's returning the favor by helping her launch Perennial City. Long a passionate composter, she read in Mother Earth News about a business offering subscription-based composting in Arizona and began to envision how it could work here. She and Kiefer ended up acquiring two acres of vacant land in the city's Visitation Park neighborhood through the city's Land Reutilization Authority. They plan to use the acreage for growing food, turning the contents of those composting buckets into soil that will eventually be used to grow crops.

The couple began advertising the business in their neighborhood, Skinker-DeBaliviere, by hanging door-knockers. They've also done some promotion on Instagram. Based on those small-scale beginnings, Grollmes-Kiefer says, they've been notching new clients every day.

Grollmes-Kiefer has grown to share her husband's love of St. Louis, and she's hopeful that their new business will help "close the loop" for one key measure of sustainability. "We want to take a problem and turn it into a solution," she says.

And she's convinced composting is an idea whose time is overdue.

"If you see someone these days throwing away their plastic water bottle, you're silently judging them," she says. "That's how composting will be going forward."

Perennial City Composting subscription plans run from $20 to $30 a month, depending on how long you sign up for and whether you want them to pick up your compost weekly or bi-weekly. See the company's website for more details.

Editor's note: An earlier version of this story referred incorrectly to the area served by Perennial City. It includes all of St. Louis city, not just the area covered by the Food Pedaler. We also edited the story to refer more precisely to the way the couple intends to use their land in Visitation Park.