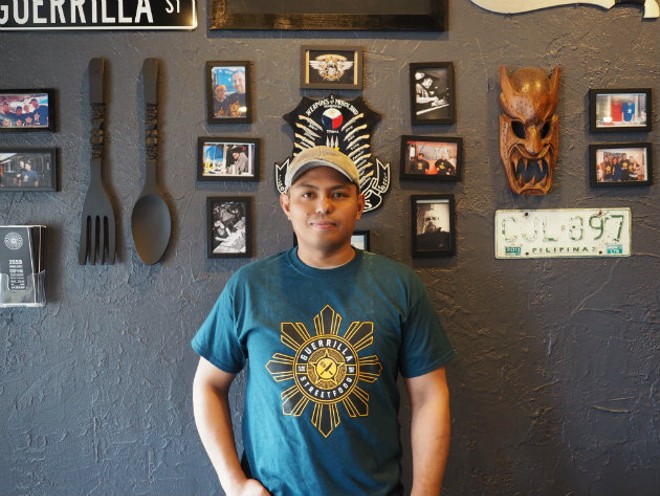 Now that he is cooking Filipino food professionally as executive chef at the forthcoming Grove location of Guerrilla Street Food (4104 Manchester Avenue), Nowell Gata feels much closer to his mom. In fact, he finds himself calling her every day for advice.

"It's incredibly cute to her," Gata laughs. "I call her every day and ask for her advice and what to do with different ingredients, like bitter melon. She likes to remind me how much I hated it when I was a kid and that she used to punish me by making me eat it."


Gata may not have liked bitter melon, but he soaked up just about every other aspect of Filipino cooking when he was a kid. Born in Manila to Filipino parents from different parts of the country, Gata grew up eating what he describes as the "entire Filipino flavor profile."

Gata would continue to feast of his mother's homemade Filipino cuisine even after he and his family left Manila. His parents' jobs in the Air Force took them all over the world — but no matter where they lived, his mom's cooking was their connection to their home country.

But Gata didn't limit himself to what he knew. He would acclimate to new places by exploring the local food culture. Those explorations ignited a passion for different types of global flavors, though he wasn't exactly sure what to make of the local eats when he arrived in Mascoutah, Illinois, at age fourteen.

"I went from Tokyo to a cornfield in the middle of Illinois," Gata recalls. "It was complete culture shock. Up until two years ago I couldn't find good ramen in the area. I didn't know what to do."

Gata remained in the St. Louis area after high school, attending Fontbonne University for journalism. After graduation, he traveled the world as a freelance writer, then returned to town to take a job with Yelp as the company opened its St. Louis market.

"I don't like to tell people that," Gata laughs, hinting at the site's controversial reputation amongst restaurant owners. "But it put me in every restaurant around town. I realized that it would make me a better expert if I went into the kitchen, so I got a job working at the Vine on South Grand."

Gata may have started at the Mediterranean restaurant to enhance his job at Yelp, but he soon found that he had both a passion and a knack for cooking. He came on full-time at the Vine, eventually becoming a baker and ultimately kitchen manager. To further his newfound career, he enrolled in culinary school at St. Louis Community College - Forest Park and eventually found himself in the food truck business, working for Completely Sauced.

Gata met Brian Hardesty and Joel Crespo of Guerrilla Street Food during his time with the truck and was instantly blown away by their concept because it showcased the food he grew up with. "They were the competition," he says. "But I remember thinking, 'Man, if they can pull off doing Filipino food, they can pull off anything.'"

Gata kept in touch with Hardesty and Crespo as he worked in a variety of kitchens around town: the Restaurant at the Cheshire, Seven Gables Inn, Baileys' Restaurants, Winslow's Home and Tin Roof. When the Guerrilla Street Food team was putting on a dinner featuring several of the area's Filipino chefs, they reached out to Gata to see if he was interested. That's where things clicked.

"We had so much fun together," Gata says. "It was like working with old friends, because, really they are old friends. They liked how I worked and what I put out, and when they needed a guy who could be their chef to hop into any kitchen and help out, they knew I'd have their back."

Hardesty and Crespo tapped Gata to be the executive chef of the Grove location of Guerrilla Street Food, which will open sometime later this year. Though he is comfortable around the kitchen and has eaten his fair share of Filipino food, this is the first time that Gata has cooked it professionally — and he is relishing every minute of it.

Gata took a break from the kitchen to share his thoughts on the St. Louis food-and-beverage scene, his love of slingers and St. Paul sandwiches, and why he'd love to see a revolution in the way we feed our kids.

What is one thing people don’t know about you that you wish they knew?
I’m big into martial arts, primarily Brazilian jiu jitsu and boxing.

What daily ritual is non-negotiable for you?
Seeing my family before leaving for work. Making a daily meaningful connection with my wife and son is a top goal for the day. And coffee.

If you could have any superpower, what would it be?
Teleportation, so I can travel everywhere.

What is the most positive thing in food, wine or cocktails that you’ve noticed in St. Louis over the past year?
An increasing voice in ethnic-influenced restaurants. It’s exciting to see more Asian and Latin restaurants not only thriving, but expanding and raising the bar on cuisine.

What is something missing in the local food, wine or cocktail scene that you’d like to see?
As a parent, there needs to be a serious, sweeping change in how our children are fed in school. Appreciation for good, real food should start at a young age. I think it would be a good idea for St. Louis restaurants to chime in on local school menus in a fresh way, as well as put out kids' menus that aren’t frozen chicken strips.

Who is your St. Louis food crush?
The person running To Go Sushi, the drive-thru sushi place in Brentwood. Much respect!

Who’s the one person to watch right now in the St. Louis dining scene?
Rob Connoley at Squatter’s Cafe. He does good things, boldly.

Which ingredient is most representative of your personality?
Coconut milk. High-five to anyone who figures that out!

If you weren’t working in the restaurant business, what would you be doing?
I’d split my time teaching jiu jitsu and surfing.

What is your after work hangout?
The gym, or Fortune Teller Bar.

What’s your food or beverage guilty pleasure?
I have an infatuation with slingers and St. Paul sandwiches.

What would be your last meal on earth?
Ginger-scallion lobster, Mama’s lumpia and a pint of Civil Life Brown.