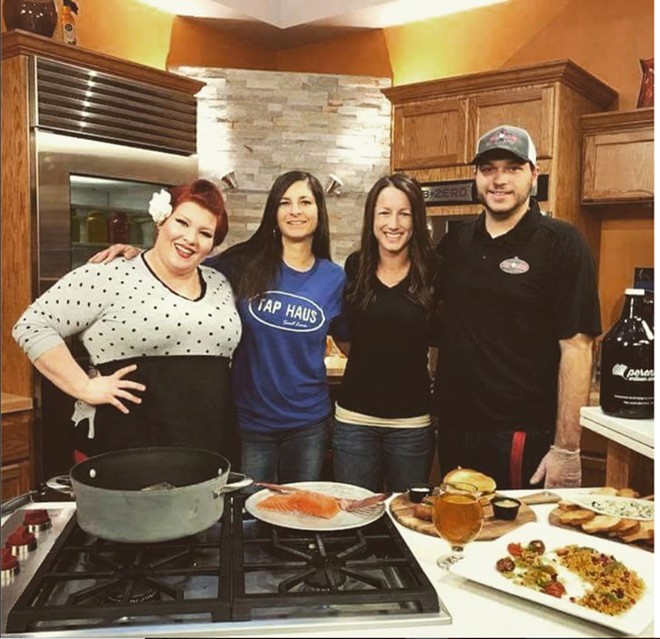 Chloe Yates has never been to culinary school. In fact, the St. Louis chef's background is in the medical field. But when she got a call to be on Flavortown Mayor Guy Fieri's show Guy's Grocery Games, she could not say no.

"I thought my boss was calling me, joking with me," Yates says. "I didn't take it seriously at first."

Months later, Yates was standing with three other top chefs from around the country inside a Santa Rosa, California, grocery store. They had just 30 minutes to grab grocery foods, cook with them and serve a dish up hot before their time was up. Each round got progressively more difficult with games and obstacles.

"It was very nerve-racking and exciting," Yates says. "I felt like a fish out of water."

Still, Yates is no kitchen naif.

Just shy of two years ago, the St. Louis native found herself dying of boredom and desperate for something new. She called up her friend who owns Oakville Sports Pub and offered to work in the kitchen there. Now, she has been a chef at the bar's sister establishment, OSP Tap Haus (6346 Telegraph Road, 314-293-9642) for one and a half years.

Now 30 years old, Yates owes her TV stardom to her personal Instagram, where she posts photos and descriptions of the special dishes she makes. The show found her, liked her stuff, and reached out to her. Next thing she knew, she was on a plane to California to film the episode.

The episode, called "Clash of the Classics," first aired on the Food Network last month. Yates had a viewing party in the OSP Tap Haus with her friends and coworkers.

"They are like family to me," Yates says. "I grew up on the Food Network, so the whole thing was an out-of-body experience."

"I didn't wanna go home," Yates said. "It was the best experience of my life."

Apparently, Guy Fieri was great too. Yates says the show's staffers called him the "kitchen angel" because he was always there if you need him.

"He was nicer than I could ever imagine him to be," Yates says.