Once a Star Chef, Christopher Lee Gets By With Help From His Friends — and Leather 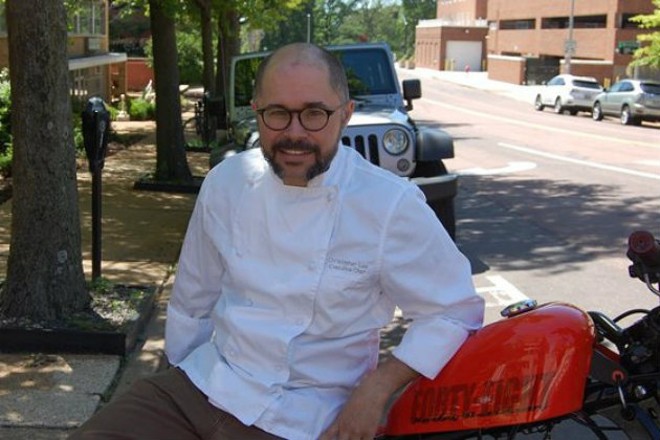 Christopher Lee has reason to be angry: a debilitating motorcycle crash not only shattered his body but killed his friend and took his livelihood. More recently, his wife Sandra — who had been the family's breadwinner after Lee's accident — has suffered an injury that has also prevented her from working. However, anger is the last emotion you'd ascribe to Lee. In fact, the way he sees it, he's actually quite lucky.

"There are life lessons in everything," Lee muses. "I think it would be really easy to boo-hoo everything and say 'woe is me,' but out of this, my relationship with Sandra is that much stronger and I can't tell you how many more friends and relationships I have. I've been doing things that are super rewarding that I would never have considered."

In the last fifteen months, Lee's entire life has been turned upside-down. A classically trained chef, he'd worked at Wild Flower, Balaban's, Sanctuaria and Mad Tomato, among many others. In the fall of 2016, he was preparing to launch a private chef company, Chef's Table STL, and a diner-style restaurant on Cherokee Street.

But on November 2, 2016, when Lee was out for a motorcycle ride with his friend Thomas Trostel, a Toyota Camry driver heading the wrong way on Highway 141 struck the pair, killing Trostel and seriously injuring Lee.

Lee's injuries were extensive. He had a collapsed lung, a shattered elbow and knee, and a broken arm, sternum and leg, raising serious doubts about how fully he'd recover, let alone whether he'd ever be physically able to return to the professional kitchen. The circumstances forced Lee to reconsider his life's path. He had a choice: Either dwell in the darkness or find meaning.

He chose the latter, embracing his situation as something that ultimately changed him for the better.

"When I walked into my house for the first time [following the incident], I apologized to my wife," Lee recalls. "I told her I was sorry that I hadn't really been there for ten years. I was so busy trying to get Chef's Table going that I had probably spent only 60 hours in my house that entire year. I had sacrificed my relationships for a title."

Lee knew he did not want to go back to that lifestyle, but he needed to find something, even if it was just a creative outlet to get him through his recovery. The answer came unexpectedly when a friend came to visit him in the hospital and asked what seemed like a random question about his motorcycle gear.

"He was really upset about the accident and asked me if I knew where my old chaps were," Lee recalls. "Sandra had them, and he asked if he could use them to make a sheath for a knife. I asked how he was going to do it, and he said he didn't know — that he was going to YouTube it."

The idea struck Lee, and as soon as he got back home, he decided he was going to explore leather-making himself. Though his arm was dislocated and his elbow was shattered, the movements were basic enough for him to perform — and had the additional benefit of helping him rehab his arm. He got to work on a journal cover and then a few other items, eventually gathering enough steam to launch his own leather-working company, Salt + Light Leather.

"I realized that I love working with my hands, which is what I loved about the restaurant business," says Lee. "I never really liked the executive side, but I loved the creative outlet. With this, if I make you something, it will last your whole life. If I cook you a hamburger, it lasts twenty minutes. I like the tangible aspect of this, that it doesn't get destroyed."

Lee has been getting stronger and stronger every day, going to the gym to rehab, taking on a restaurant consulting gig here and there and working on his leather business. He's tried to go back to cooking but gets tired and sore very easily, rendering kitchen work almost impossible at this point. Still, he was beginning to feel like he was hitting his stride when he and his family faced a setback last November. His wife, a hairstylist and the family's sole consistent breadwinner, suffered a bad leg break and has been unable to work.

Still, Lee refuses to feel discouraged. "We both needed to slow down," Lee says. "I'm used to running 100 miles per hour. She is too. We just can't move as fast as we have been. It causes you to reflect."

To help Lee and his family through this additional hardship, Marc Rollins, the executive chef at one of Lee's former employers, Sanctuaria, is hosting a benefit on Monday, February 26. The event will run from 6 to 11 p.m. and feature drink specials as well as a food buffet consisting of some of Lee's classic dishes. A $25 donation is suggested.

For Lee, it's an odd turn to be the one attending a celebration rather than working at it — and he is relishing that role.

"I've been cooking since I was fifteen, and one thing I've learned is that you sacrifice a lot," Lee says. When it's a holiday, you're cooking. When it's a birthday or a wedding, your'e cooking. You focus on tasks rather than recognizing that you have friends and relationships that can slip away. I don't want to be like that anymore."

"I've been so focused on getting where I want to be. The last year has shown me that maybe you don't need to be where you want to go."