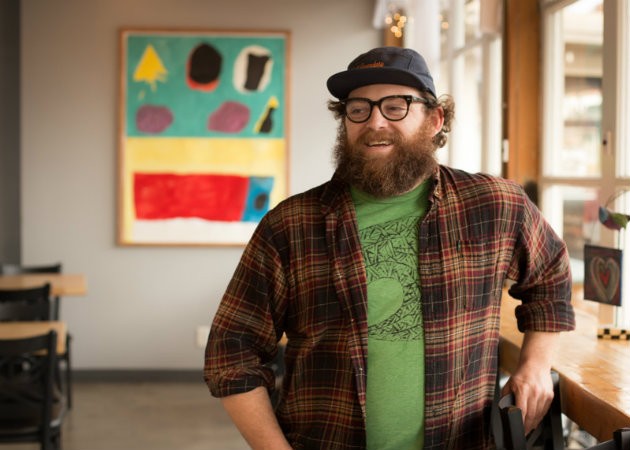 If you've ever tasted the flaky, pepper-flecked biscuits at Living Room (2808 Sutton Boulevard, Maplewood; 314-899-0173), you might presume co-owner and kitchen manager Nate Larson is a long-time baking master. However, Larson admits he wasn't all that interested in cooking — or even food in general — for most of his life.

"I was picky as a kid, a French-fries-and-cheesesticks vegetarian in my adolescence, and a burgers-and-beer kind of person in college," Larson says. "It wasn't until the food scene in St. Louis really started to take off about ten or fifteen years ago that I saw food as something more than you can stuff in your face."

While he did a brief stint as a teen at Brentwood's Sonic Drive-In, Larson never dreamed of a career in the restaurant business. His career path seemed pretty clear. A creative-writing major in college, Larson got into the nonprofit world after graduation, working with adults with disabilities. His parents owned their own business in that field, and Larson planned to follow in their footsteps by opening an art center that would serve organizations like theirs.

When Larson's art-center plans came to an abrupt end, he had no idea what he wanted to do. But while he took a job working at a lumber mill in St. Charles, his father Barry Larson and his friend Chris Phillips had begun roasting coffee under the name Arthouse Coffee. Arthouse was going to farmers markets and had created a cold-brew coffee that was being served at Southwest Diner; Larson could feel the momentum building.

When the old Black Cat Theater in Maplewood became available, Larson joined his father and Phillips in moving Arthouse's operations there, initially conceiving of the retail space as a tasting room. They quickly saw a demand for more.

"We realized we had to sell cups of coffee; there was no way around it," Larson explains. "And then when we were selling coffee, people would want to know if there was a cookie to go with it. I was like, 'OK, how can I make a banging cookie? And that's where my focus really branched off from coffee to food.'"

Larson began with cookies, then added breads, butters, spread and cinnamon rolls to his repertoire. When customers saw that he had breads, they asked if he had eggs in the kitchen. The next thing he knew, he was making breakfast sandwiches.

"I just made some boiled eggs, put some bacon on there and it turned out to be good," Larson recalls. "From there, it was just one thing after another."

Larson explains his ability to put out good food with minimal training not as natural culinary talent, but as a tenacity in figuring out things by reverse engineering. It's a skill he honed at the lumber mill.

"So much of building is sizing things up, measuring twice and relying on the tradition of established ways to do things," Larson explains. "It's like making a beurre blanc: There is a way to do it and you don't stray from that at first, but then you can add to it."

Larson also credits Living Room's neighbor, Chris Bolyard of Bolyard's Meat & Provisions, as being a godsend to his culinary education. "He is the nicest person and is so giving with his knowledge," says Larson. "In the beginning I had no clue. I didn't know what I didn't know, and I'd go over and tell him I bought four cases of lettuce and didn't know how to keep them fresh. He never made me feel untoward for asking such questions."

These days, Larson still has quite a few questions for Bolyard, but he is holding his own, putting out a completely from-scratch menu of breakfast and lunch dishes and even the occasional special-occasion dinner here and there. As he looks back at how much has changed since taking over the space in 2014 — significantly, his father is now out of the daily operations, replaced by his sister, Hannah, who keeps the place humming — he can't help but feel a sense of accomplishment at how much he's achieved simply by being willing to figure things out as he goes.

"I'm a project guy," Larson explains. "If you want to build an amusement park in Ellisville and no one else knows how to do it, you come to me. My most passionate pursuit is figuring out a new thing, which is why the food industry is a source of constant enjoyment. There's always the question of 'what's next' and figuring out how to deal with it."

Larson took a break from making Living Room's scrumptious biscuits to share his thoughts on the St. Louis restaurant scene, his musical side project and why he'd love to put the bad guys in a slippery situation.

What is one thing people don’t know about you that you wish they did?
Most of our customers don’t know I’m an avid musician and performer under the stage name True Friends.

What daily ritual is non-negotiable for you?
A nightly snuggle with my kids and wife is a necessity.

If you could have any superpower, what would it be?
I've always told people I'd choose to be able to become black ice at any time I wanted. I could slip up criminals and keep them on ice until the police arrived.

What is the most positive thing in food, wine or cocktails that you’ve noticed in St. Louis over the past year?
Places are super chill about my wife and I bringing our kiddos out to eat with us. That has been a nice surprise.

What is something missing in the local food, wine or cocktail scene that you’d like to see?
There’s good stuff here already, but more shawarma, please.

Who is your St. Louis food crush?
My food crush is on the biggest name in all St. Louis freelance food photography — my boy Spencer Pernikoff. He is super gracious and a spectacular dancer.

Who’s the one person to watch right now in the St. Louis dining scene?
Ari Jo Ellis at the Cut. She is highly perseverant and super hardcore.

Which ingredient is most representative of your personality?
Cake. But cake is no ingredient, you say? Well, it’s an essential ingredient for happiness and love, so I’m like cake.

If you weren’t working in the restaurant business, what would you be doing?
Maybe still working at a lumber mill in St. Charles.

Name an ingredient never allowed in your restaurant.
There’s a time and a place for all ingredients, I suppose. Plus variety is the spice of life, so you never know.

What’s your food or beverage guilty pleasure?
I am not sure I’ll ever give up my sweet, sweet Diet Coke. Man, oh man.

What would be your last meal on earth?
If I get to choose my last meal on earth, does that mean I’m departing soon to the greatest and final frontier — SPACE?? In that case, then give me the best food to prepare my body mind and spirit for interstellar travel.