For Chef Gerard Craft, Lion's Choice Is the Best Partner in Town 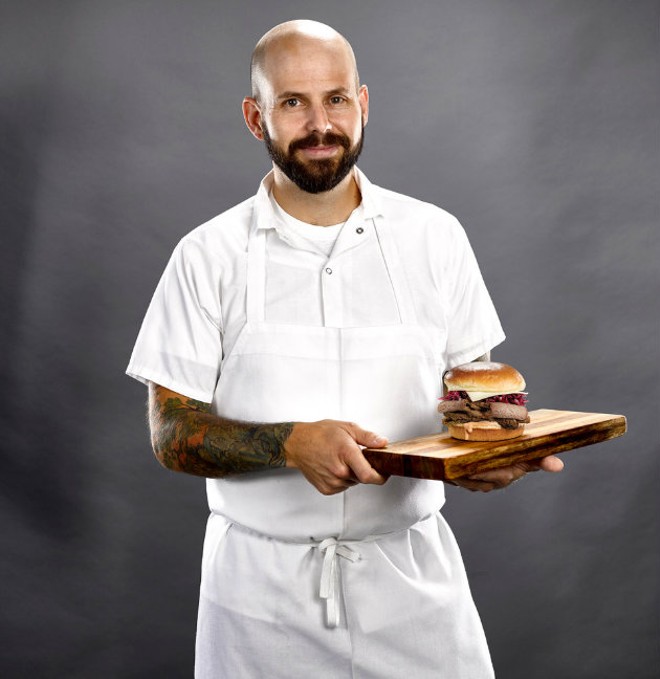 Gerard Craft has been at the top of the city's restaurant scene for a decade, opening one successful restaurant after another and winning a James Beard award for Best Chef: Midwest in the process. However, when it comes to working the rush at Lion's Choice (multiple locations including 1605 South Hanley Road, Brentwood; 314-644-6340) in Brentwood, the acclaimed chef admits it was a learning experience.

"I'm glad nobody recognized me, because I sucked," Craft laughs. "Seriously, the people who work there are really good at what they do. They do it every day, and they were teasing me the whole time. Everyone who works there is great."

Working the Lion's Choice meat slicer may be the last place you'd expect to find a chef of Craft's caliber, but he has good reason. The stint was part of the research and development for a new partnership between himself and the beloved roast beef chain: Yesterday, Lion's Choice announced that it would be collaborating with Craft on a series of limited-time-only menu items, the first being the "Crafted Brisket Sandwich."

For Lion's Choice, the collaboration represents an opportunity to associate itself with one of the biggest names in St. Louis' culinary scene and bolster its reputation as a premiere quick-service chain.

Says CEO and Mike Kupstas in a press release announcing the new sandwich offerings, "It's an honor to have someone of Gerard's caliber share his culinary insights with our team. His attention to detail, insistence on high-quality ingredients and creativity are second to none."

For Craft, the relationship allows him the chance to study Lion's Choice operations as he grows Niche Food Group, with brands tailor-made for expansion, including downtown's fast-casual Porano Pasta and the wildly popular Pastaria, which expanded to include a location in Nashville this past September.

"I'm really into fast-casual and operations, and I'm out of my element on stuff like that," Craft explains. "They have this really great corporate culture and that's something we are interested in looking at. We're learning all these new things. The way their systems are designed is awesome."

Craft says that the biggest difference in conceptualizing dishes for his restaurant versus those for Lion's Choice comes down to scale and repetition, things he hopes to learn from the partnership.

"Learning how to get these into 25 locations has been a challenge. Braising something is easy for me, but when it's about having other people do it, that's where the challenge comes in," Craft explains. "It's more about teaching and learning, and teaching again and learning again. You do it over and over and you have to figure out systems to reduce errors. It's cool. It's a different world."

The "Crafted Brisket Sandwich" features slow-braised brisket, pickled cabbage, Swiss cheese, spicy mayonnaise and a "hint" of Lion's Choice horseradish on a brioche bun. The sandwich is currently available at all 25 area Lion's Choice locations and, according to a press release, represents the first of several menu items Craft will be developing for the brand throughout 2018.

Craft, who describes himself as a Lion's Choice fan, notes that, as much as he wanted to learn the operations side of a larger-scale business, he would not have picked just any brand for a partnership.

"It's local, and it's adored by all my staff," he explains. "When I casually brought it up to them that I was doing this they were really excited. That means a lot to me."