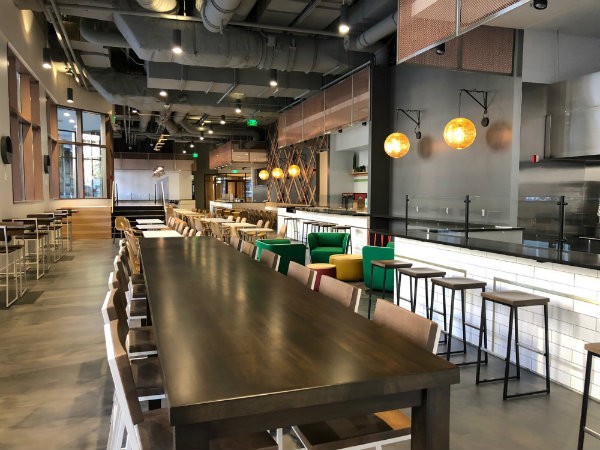 Your dining options in downtown St. Louis are about to expand again.

The neighborhood's first food hall will be opening at 10 a.m. on Monday on the ground floor of One Metropolitan Square, according to a press release from real estate and investment management firm JLL. Known as the Eatery, the hall will include Arista Gourmet, Dino’s Deli and Kimcheese Asian Fusion — all of which are making their downtown debut.

In addition to those three restaurants, JLL is "in talks" with two more possible restaurants to reach its capacity of five restaurants, the company says. JLL says the current lineup has hired about 25 new employees to staff their new locations at the Eatery.

Located at 211 North Broadway, One Metropolitan Square is the tallest skyscraper in St. Louis and the home of law firms Bryan Cave and Brown & Crouppen, among other employers. Savvy diners may be used to eating there — it's also home to Kemoll's, although partaking in its cuisine and sweeping views requires an elevator ride.

The 9,628-square-foot food hall will feature a "fresh, modern interior" by Nehring Design of St. Louis. Expect high-top, lounge and counter seating; high ceilings and windows for natural light; and even a 1,000-square-foot covered patio for when the weather warms up. And for those of you who can't step away from work, even for lunch, yes, there will be public WiFi — as well power outlets at nearly every table.

The Eatery is housed in what used to be a restaurant and common area. The location underwent a $2.5 million renovation.

“We are excited to help create a platform that allowed for multiple new concepts to open in downtown St. Louis," Rick Spector, the senior vice president of retail brokerage at JLL, said in a statement. "Now workers from One Metropolitan Square and the surrounding area will get to experience the great food served by these unique restaurants.”

You can visit the Eatery Monday through Friday from 10 a.m. to 3 p.m. beginning January 29.