The Impossible Burger Is Now in St. Louis — Without Meat, But With All Its Flavor 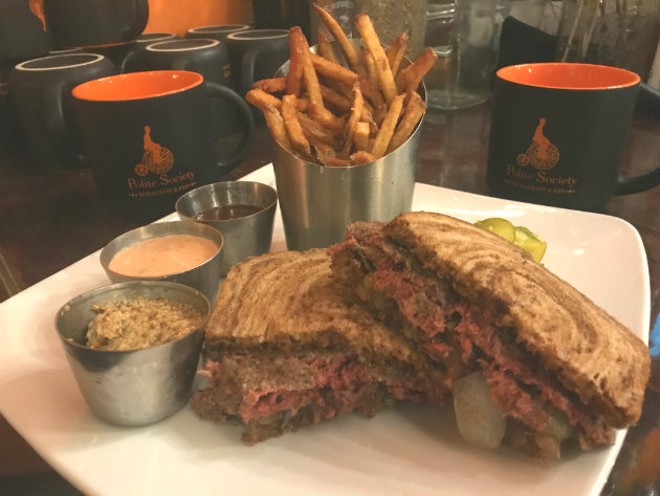 Thomas Futrell, the executive chef of Polite Society (1923 Park Avenue, 314-325-2553), doesn't hesitate when asked if the Impossible Burger is as good as it sounds. The answer is "yes," and he even has a fool-proof anecdote to prove it.

"One of our servers didn't fully explain the burger to some guests, and it wasn't until after they ate it that they realized it was a veggie burger," says Futrell. "They had no idea until after the fact."

Going forward, he adds, "We told our servers after that that they have to be very clear with guests about what this burger is. We're not trying to fool anyone."

Still, fooling guests may be hard to avoid with a veggie burger so meat-like in appearance, texture and taste it elicits nothing less than shock from even the most hardcore carnivores. A mere "veggie burger," this is not: The Impossible Burger is a plant-based food revolution.

If you haven't heard of the Impossible Burger, chances are you've seen one — at least a larger-than-life-sized photo. Images of the meatless wonder have been popping up on billboards across the city over the last few weeks as its parent company, Impossible Foods, prepares to launch what it's touting as a wonder product to the mass market.

To the unsuspecting eye, theses billboards might look like advertisements for Hardee's latest "Thickburger," with photos of juicy patties, lettuce, tomato and mayonnaise piled onto a golden bun. In actuality, they are about as far from fast-food conventional meat as you can get. Entirely plant-derived, the Impossible Burger is the result of years of research by Patrick Brown, a Stanford biochemist who has figured out a way to simulate meat using modified yeast to create a compound called heme.

Through his research, Brown isolated heme as the substance that makes meat what it is. Heme gives meat its taste, its texture, and it's what makes it, for lack of a less macabre term, bleed. It also happens to be found in soy, which makes it possible to produce the same effect using entirely plant-based ingredients, though the amount of soy you need to produce a burger is astronomical.

Brown found a way around this problem. Wired did a deep-dive on the science of the Impossible Burger last fall as it began to take the country by storm, and the Cliffs Notes version goes like this: Take the genes found in heme-producing soy roots, insert them into yeast and feed it sugar, then add it to a mix of ingredients such as wheat protein, potato protein and coconut.

The result is a product that not only mimics the texture and taste of meat, it also sizzles, releases aroma and makes the same sounds as it cooks as if it were an actual patty of ground beef — only one that, according to Impossible Foods, uses 95 percent percent less land and 74 percent less water for production and creates 87 percent less greenhouse gas emissions.

Currently, the Impossible Burger is available at two places in St. Louis: Polite Society and Frida's, the stylish vegetarian spot in University City. Though they are the only two restaurants in the state carrying the in-demand product right now, that will almost certainly change as Impossible Foods prepares to increase production and expand its footprint.

Natasha Kwan, owner of Frida's, is no stranger to plant-based burgers and has won accolades for her bean and vegetable-based "Frida Burger." However, she sees the Impossible Burger as a welcome addition to her menu not just for vegetarians, but for meat-eaters who might want to start making healthier and more environmentally conscious choices.

"We already have a custom burger menu, and this is just one more thing we are putting on there," says Kwan. "But this is a great transitional product for people who are looking to eat less meat. If I can get someone to eat less beef twice a week, then I can have an impact on their overall health."

Because Frida's is entirely vegetarian and does not fry or use butter or sugar in its cooking, the Impossible Burger's realism is almost too decadent for Kwan. "It's a beef-like burger. It's juicy and oily; it's the oiliest thing in our kitchen. Personally, I prefer the 'Frida Burger,' but to each their own. I've been a vegetarian for years, but if you are a meat-eater and are craving that sort of juicy burger but want to be healthier, then this is a good transitional product."

As for Polite Society, Futrell is all about the decadence. The chef has been obsessing over the Impossible Burger since he heard about it being served at Momofuku, David Chang's famed New York restaurant. He was eager to bring it to Polite Society but quickly found out that doing so would be no short order. His quest began with several months of email exchanges with Impossible Foods, after which he was allowed to apply to serve the burger.

"It took hours for me to put together the application," Futrell says of the process, which even included a three-page statement.

When he finally got his hands on the product, Futrell was impressed with how much the burger mimicked actual beef, to the point that he decided that a patty melt preparation was the best way to showcase it. "It just seemed like the right way to treat the product," Futrell says. "When you think of a patty melt, you think of simplicity of ingredients; it's the burger, cheese, grilled onions, griddled bread. We do ours Steak N Shake style with our own version of 'Frisco' sauce."

As impressed as he has been with the Impossible Burger, Futrell is equally impressed with the response. "Between Wednesday and Sunday we sold 110 of them," he says. "The response has been incredible."

For now, though, Futrell is excited to have the opportunity at long last to serve such a game-changing food to his guests. "To me, when you think about the name 'Polite Society,' it means that we want to be as inclusive as possible in what we serve," says Futrell. "To be able to offer this is a way of increasing that inclusiveness and making sure people have choices."

For her part, Kwan is just hopeful that the Impossible Burger can be a first step toward healthier bodies and a more sustainable food system, and she is bold in her vision. "At the end of the day this is a good way to get people to get a little healthier and take those steps that can have a big impact on a local, national and even international level."