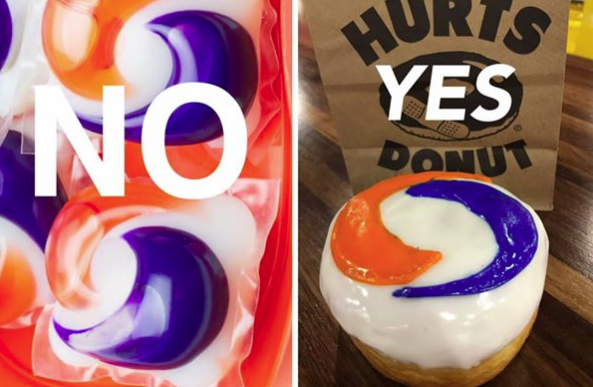 If you've been desperately trying to get in on the latest craze bedeviling today's youth, but you're not quite daring enough to swallow an actual Tide Pod, a donut shop in Springfield, Missouri, has a solution for you: The Tide Pod Doughnut.

Hurts Donut unveiled the tasty treat this Wednesday — quickly drawing thousands of shares on Facebook. See, it looks just like the capsules of laundry detergent, only this one is edible!

"I thought this might clear up any confusion there might have been, but now adults are throwing donuts in the washer," the donut shop posted.

Now, we know what you're thinking. Hilarious, right?

"OK why fuel the flame," wrote a Facebook user named Marcy, who sounds like a barrel of laughs. "These have killed adults and kids think it's funny to dare each other to eat them? That's harmful. If your kid was in the er because they ate one would you not be freaking out? This is sad it's becoming a joke when kids and adults are getting harmed. How about not encourage eating them?"

"Not funny at all," wrote another user, this one named Julie. "This seems to be a serious problem."

"I'm sorry but I don't think this is right," Stacy wrote. "It's kind of showing kids that it's ok and it's a joke or something."

To which we say, yes. It's a joke. It's a funny one. And if we needed proof that
for every kid doing a ridiculously stupid thing, there's a mom who refuses to mock them for it, we now have it. Despite the fact that there's very little evidence that more than a handful of kids are eating Tide Pods (about as many as other kinds of household poison), the nature of online media in 2018 requires that we all treat the story with deadly seriousness and localize it with expressions of alarm. Those YouTube videos about the "Tide Pod Challenge"? Naturally, the outrcy grew great enough, they've now been taken down completely. Spoilsports!

So we applaud Hurts Donuts, and when it comes to responding to their Facebook post, we prefer the comment left by Devyn, who writes, "Hurts Donuts, I need help. I put your donut in the washer and it just made my clothes sticky, do I need to add more donuts?"

Yes, Devyn. That's exactly what you need to do. Exactly.