St. Louis Breweries Fight Back After Instagram Controversy Puts Them on Blast 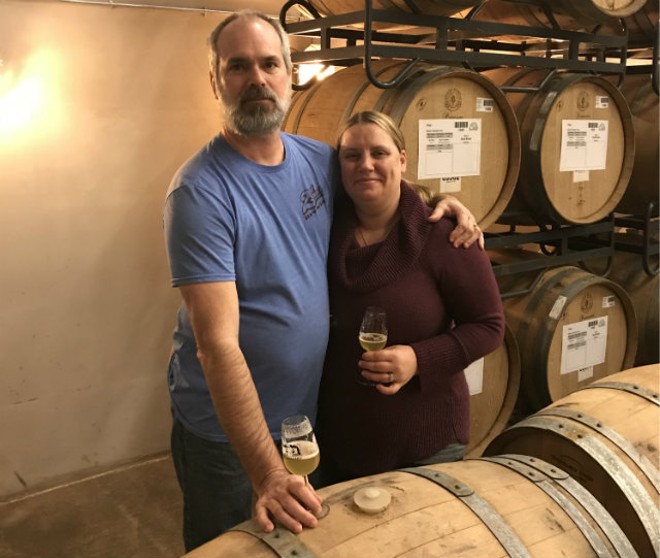 Libby Crider was on the first real vacation she'd taken in years when she started getting messages about the story. A site that covers the beer world had published a piece about misogyny in the industry — and her brewery, St. Louis-based 2nd Shift, had been singled out.

The January 2 story on GoodBeerHunting.com, "I Know What Boyz Like: A Grassroots Industry Struggles to Find Leadership on Social Issues," focused on a series of Instagram accounts affiliated with craft breweries. The accounts were, for the most part, publicly accessible — but they were not the official brewery accounts. They were, instead, alter-ego accounts that contained goofy photos and more than a few dick jokes.

Some, the story acknowledges, were benign. But then, author Bryan Roth continued, there was St. Louis-based Perennial Artisan Ales' account, Perennialfuckboyz, which Roth alleged was "what appears to be the inspiration for it all ... with a tone that sets is part [sic] from others."

Then the story took aim at 2nd Shift.

"The majority don't come close to levels of outrageousness that could result in reports to site administrators," Roth wrote. "But still, there are examples like 2ndshiftsexytime (2nd Shift Brewing), which has photos of a shirtless man playfully posing in a brewhouse with 'puresex' added to its description, and a picture of a nozzle and condom next to each other, noting in its caption, 'When you have to purge a tank at 11 but have to fuck at 3. #wrapitup #brewerylyfe.' There’s a third and final photo on the account, with a man laying on his back, a 750ml bottle positioned in front of his crotch. 'Come and get it,' its description reads."

As a woman in an industry that skews heavily male, Crider says she was happy to see GoodBeerHunting.com take on misogyny, which she says is a real problem in the craft beer world. But she was stunned to find her brewery in the author's sights.

For one thing, the initial version of the story never mentioned that 2nd Shift is co-owned by a woman — surely worth noting in a story that was expressly focused on the "boys club" mentality.

For another, and more importantly, no one had reached out to the brewery for comment. Had they done so, Crider says, she would have brought their attention to a key fact — 2nd Shift had pulled the plug on its alter-ego account more than six months earlier.

"I didn't fault him for including us," Crider says. "That page was inappropriate, and in poor taste. But we had decided to abandon it. It didn't cross my mind that it would come back to be an issue — and if it did, you'd think we'd at least get a phone call."

Crider isn't alone in her anger. Phil and Emily Wymore, the co-owners of Perennial Artisan Ales, have also criticized the story — raising questions about both the author's tactics and his focus. Other brewery owners have since weighed in, creating a backlash intense enough to have a triggered a backlash of its own.

From Denmark while still ostensibly vacationing, Crider did what many an angry story subject does in the Internet age — she put Good Beer Hunting on blast on Twitter.

First of all - this article, in which our brewery is mentioned, is very well written. Any objective reader would applaud this article for addressing underlying sexist tones that still pulse through this industry (2/10)

An account was created by a couple of my employees, with my permission, to be a parody account - an account that reflected the general goofiness of our brewery (4/10)

To be lumped into an article that further claims that we are contributing to the lack of diversity in a white male driven industry is frustrating to say the least - to claim that there’s a underlying code of silence, is maddening (6/10)

While the account may have been in poor taste, I think the chance to defend the fact that it was, in fact, already recognized and abandoned, should have been afforded to myself & 2nd Shift (10/10)

Phil Wymore of Perennial, too, took to Twitter, noting one big irony for a story that supposedly grappled with a culture "unwelcoming" to women.

"No women were interviewed for this article," he wrote. "No female perspectives from the highlighted breweries were published."

Unlike 2nd Shift, Perennial was contacted for comment. But Emily Wymore says it hardly seemed designed to elicit an interview. The request came in at 7 a.m. on the very day the story would later be published. With young kids out of school for the winter break, she handed off the interview to her husband. More time, she says, might have allowed the author to get a female perspective.

Overall, she says, the story's focus seemed badly missplaced. "Is craft beer a male-dominated industry? Absolutely. Do females in it have a harder time? Absolutely. But do I think women will feel not welcome in the industry because a handful of breweries have accounts with 'boyz' in the handle? I don't."

Indeed, despite the author's characterization of Perennial's account, Wymore insists it was, yes, benign. "The guys who work for us are the best group of guys ever, and they would never make a woman feel not welcome," she says. "To lump us in with activity they describe as misogynist and homophobic — that's insulting. It's just unfair."

The St. Louis' breweries pushback drew support, both locally and in the beer world. Some brewers noted that Good Beer Hunting makes its money by working for breweries — and claimed that one of its clients with a more prominent Instagram account got a free pass. Others noted the irony that a story purporting to take on boys' clubs ended up targeting two breweries co-owned by women, and in Perennial's case, a person of color.

Michael Kiser, the founder of Good Beer Hunting, says he wasn't surprised by the backlash.

"The angry response was entirely predictable, and from what we can tell, almost entirely from people in STL who are fans of the breweries mentioned," he writes in email to the RFT. "It’s understandable — craft beer, for better and worse, survives on a bit of tribalism and shared identity in their communities. ... Many small breweries would not survive without that close attachment. I would argue that’s exactly why these kinds of Instagram accounts are so critical in the messages they’re sending, because for every attachment they’re creating, they are likely creating an equal amount of dissociation for others in the same community who are not white males."

Kiser says that the claim that he's worked for a brewery that has an over-the-top account and didn't get mentioned in the story is just flat-out wrong. And nothing in the story, he says, has been found to be inaccurate. (Even if 2nd Shift was no longer regularly posting, he argues, the account hadn't been taken down: "Many of the accounts are irregular in the frequency of their posting, and we had no reason to think this account wouldn’t continue posting in the future.")

"We’ve received messages of support from two Brewers Association members who agreed with both the premise and reporting in the article in the way that it addressed the problem," Kiser adds. "And many brewers from around the country have done the same. In their minds, this was a long time coming."

But for some breweries, the story felt like a cheap shot. Kate Brankin of Chicago-based Pipeworks Brewing Co. noted that Good Beer Hunting itself sponsored a men's-only networking event as recently as 2014.


How many women worked for GBH during those MEN ONLY years? Those photos are nicer - but still reek with exclusivity. GBH is a small business that has been afforded the luxury of growing without GBH calling them out for their growing pains. 4/7

I'm all for inclusivity and for forgiveness for the sake of progress. I've forgiven GBH. But their conflations can hurt individuals and small businesses and need to be better researched and contextualized in order to give businesses GBH claims to support 6/7

the same chance to evolve in a new industry that GBH had. I do think this industry needs to change for the better. The fact that there have been TWO "Panty Dropper" beers blows my mind. I don't think poorly contextualized articles is the way. 7/7

A day later, Brankin tweeted that she was glad she'd spoken out.

"Many industry peers reached out yesterday, saying they're glad people are starting to speak up against @goodbeerhunting," she wrote. "They've been reluctant as GBH has been known to respond to differing views w/ aggression or deleting to reframe the conversation in their favor. I'm the messenger of this sentiment but I tend to agree. Though GBH claims neutrality, many say they don't feel comfortable w/ GBH as moral police of the industry as they do profit from some companies, tainting GBH's ability to be unbiased."

But Kiser says he stands by the story; he firmly believes the Instagram accounts, even when propagated by how "otherwise smart, creative, progressive people" are creating "a culture of exclusion." And on January 4, Good Beer Hunting followed up on the controversy by publishing an op-ed by St. Louis beer blogger Sarah Rybicki that criticized local breweries' defensive posture.

"The initial responses to the article shed light on particular breweries and their perspectives on the accusations, which I understood and appreciated hearing. However, it should have ended there," she wrote. "The continuation of the dialogue quickly became confrontational on multiple fronts, displaying symptoms of a toxic mentality that exists in the St. Louis beer community. Rather than acting like a group of artisanal producers, some people in the industry see themselves as gods."

I must state that I highly respect 2nd Shift and the Criders for what they've accomplished and for the way they have worked to promote women in the industry. I do believe they are owed an apology for the way they were presented without any context.

But one brewery is not the real issue, in my opinion. As someone who lives in this city, I hear many voices outside of St. Louis who are trying to comment on the problems we have here—and our response as a community has been to deny it. Frankly, its maddening to see people I admire speaking so adamantly against this specific piece, or a single paragraph, instead of viewing the greater problem with some objectivity.


Emily Wymore says she finds Rybicki's piece even more disheartening than the original reported story. "The picture being painted is not the truth in my experience, or anybody's experience that I know," she says.

As for the perennialfuckboyz Instagram, which Kiser has argued is the granddaddy of all the "boyz" accounts, it's been taken down. But, Wymore says, it's not being abandoned; instead, they're going to integrate its brewers' posts within its main account.

"The intent was just to be silly," she says. "We didn't to want to clog our main Instagram with silly stuff. But if anyone thinks having a 'boyz club' account is anti-feminist behavior, I don't want anything to do with that."

But beyond any criticisms of the author's reporting process, she simply believes the hyper-focus on Instagram accounts is misguided.

"There are other issues for women in the industry that deserve attention," she says. "This is not one of them."