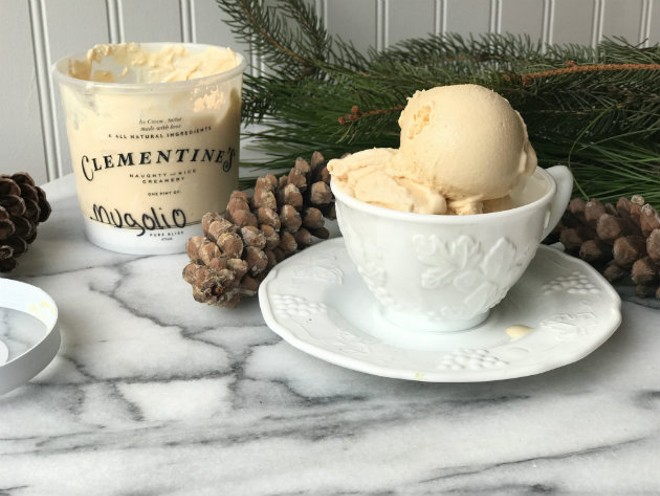 Tamara Keefe couldn't believe it had never been done before. After happening upon an exotic pine bud syrup called mugolio at a gourmet market in Portland, Oregon, the owner of Clementine's Naughty & Nice Creamery (multiple locations including 1637 S. 18th Street; 314-858-6100) began frantically searching the web for an indication that anyone had previously used it to make ice cream. To her surprise the search came up empty.

Keefe could not understand how this could be. After all, the syrup was advertised as a topping for many things — a drizzle for lamb and duck, a dressing for salads and even an ice cream topping. Yet no one had actually put mugolio in the ice cream.

"I couldn't find anyone who had done it, and it didn't make sense," Keefe recalls. "When I didn't see it out there, I thought that maybe it wasn't good or something. I figured why not bring some back to St Louis and play around with it?"

After bringing a few bottles back to St. Louis — no small investment at $45 for each two-ounce jar — Keefe confirmed her suspicion that the syrup was indeed made to be an ice cream flavor. The perfume and earth of the pine bud syrup softens in the sweet cream base, resulting in an understated flavor that can only be described as if you could bottle up the experience of walking into a home with a fresh-cut Christmas tree in the living room and a batch of amaretti cookies in the oven.

"It's hard to nail down," Keefe admits. "It's deep, earthy, somewhat pine-y and sweet. The flavor is subtle and elegant."

Keefe may have stumbled upon a new flavor of ice cream, but don't expect to see mugolio suddenly mass-produced. As she learned in the course of her research, the syrup is so rare and small-batch it simply cannot be scaled for large production, and even if it could, it would be cost-prohibitive. The base of the syrup is the sap of Mugolo pine buds, which are hand-harvested from the Dolomites every spring by a woman named Eleonora Cunacia. Cunacia forages for the buds with her husband, then places their haul in glass jars with sugar and herbs where they macerate and seep their sap. This mixture is then filtered and cooked over low heat with additional sugar until it forms a deep, herbaceous brown syrup. The entire process takes roughly one year.

"She's a woman after my own heart," says Keefe of Cunacia. "She's a forager and a craftswoman who spares no expense and does what she does for the love of it. In order for her to even begin picking these buds she had to have the Italian government create a whole new classification for her. Can you imagine having to go through something like that?"

Keefe has only had one phone call with Cunacia, and they chatted mostly about the logistics of importing the syrup in large quantities. However, she gets a kick out of the feeling that she may have left Cunacia a bit dumbfounded. "Italians like to think that they think of everything first," Keefe laughs. "In the gelato world, they think they have come up with all the flavors, and she hadn't heard of anyone doing this. She was definitely surprised."

Keefe's customers are equally surprised when they try the mugolio. "At first, they seem hesitant, like they won't like it, but they don't want to be rude and refuse to try it," she says. "Then they put it in their mouth and are like, 'I love it!'"

Seeing this sort of expression come over customers' faces is Keefe's favorite thing about Clementine's, she says: "I make the happiest food on earth." Still, that happiness will only be short-lived — at least when it comes to the mugolio — she estimates that it will be around for only a few more weeks, and once it is gone, it's gone.

At least until next year.