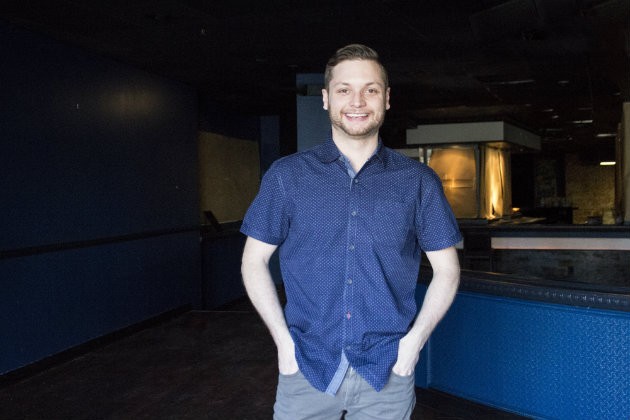 When Adam Altnether, chef and co-owner of the forthcoming Elmwood (2704 Sutton Boulevard, Maplewood), thinks of the happiest things in life, the smell of a slow-cooker is at the top his list.

"Growing up, my parents did a lot of cooking out of necessity. We loved to go out to eat but couldn't do it all the time," Altnether recalls. "I can remember coming home for the day and something would be in the slow-cooker. There was nothing better in life than that. I'd open the lid and it would just hit me: 'Yep, I'm home.'"

Food's ability to provide such joy and sense of place inspired Altnether to get involved in cooking at an early age. The Food Network added to the mystique, and when he found out about the Career Discovery program for high school students at the Culinary Institute of America (CIA), he jumped at the chance to see what it was like to attend cooking school. After immersing himself in the program, he worked his way up to becoming a teaching assistant in his cooking classes and graduated high school with his sights set on attending culinary school.

He enrolled in the CIA, and, after graduating, came back to St. Louis where he landed a job with Gerard Craft's Niche Food Group. There, he worked his way up to Niche's chef de cuisine, became a partner in the restaurant, and achieved accolades including being named to Forbes' "30 Under 30" list.

Altnether departed Niche to take a job with the St. Louis Cardinals, where he cooked for the players and became a personal chef for one of them. He loved the job, calling it a dream for someone who grew up in St. Louis, but he remained open to returning to the restaurant business. The opportunity just had to be right.

That opportunity came when he and former Niche general manager Chris Kelling found themselves spitballing about their dream restaurant. The two had become friends at Niche and remained close even after Altnether departed the restaurant. As they met for coffee and chatted about what their dream restaurant would look like, they realized they were actually making plans. Once those plans got to a certain point, they decided to take the leap.

Altnether describes the forthcoming Elmwood as a place that will evoke a sense of community — somewhere that large tables filled with families can gather and share a meal together. "A big thing for us is that there is no pretense," explains Altnether. "We don't want you walking in and feeling uncomfortable because you think it's too fancy or you feel underdressed or that the menu confuses you."

Kelling and Altnether intend for Elmwood to be a place that appeals to someone looking to grab a burger and a beer after work on a Tuesday, then celebrate an anniversary or a birthday on a weekend night. "We want to appeal to every group for every occasion," says Altnether.

Of course, food is an essential element of Elmwood, but as Altnether explains, the restaurant will be less about a particular type of cuisine and more about conveying a feeling. "We can make food for everyone. We're not narrowing this down to a certain type of cuisine. If it's delicious, we will cook it."

What's more important, Altnether insists, is something that harkens back to his days coming home and opening that lid on the slow-cooker. "We're trying to evoke a feeling," he explains. "We just want people to come in, have a great time, laugh and smile. That's all we want to see."

Altnether took a break from the Elmwood preparations — he describes a May opening as "ambitious — to share his thoughts on the St. Louis food and beverage scene, how he escapes from reality, and why you should think twice about sitting at the poker table with him.

What is one thing people don’t know about you that you wish they did?
I like to read a lot of fiction, from Harry Potter to Ready Player One. It’s fun to just let your mind escape sometimes and take a deep dive into those literary works.

If you could have any superpower, what would it be?
Time travel. Not only to go back to historic periods and see how life actually was back then, but it would be amazing to have the ability to act on the saying “hindsight is 20/20.”

What is the most positive thing in food, wine or cocktails that you’ve noticed in St. Louis over the past year?
It is super exciting to see more interest and investment in St. Louis from restaurateurs and beverage professionals opening new places and expanding concepts throughout the metropolitan area. And it’s great to see all of these places being supported by the community.

What is something missing in the local food, wine or cocktail scene that you’d like to see?
I think it would be cool to see more distilleries come to town. It is a process and art form that I have been interested in for quite a while, and I believe St. Louis has a captive audience for it.

Who is your St. Louis food crush?
Brian Lagerstrom of Union Loafers. Something about that baguette bad boy just gets me every time.

Who’s the one person to watch right now in the St. Louis dining scene?
It's not one person, but I think that the team at Louie is doing something really special. Great food, great atmosphere, great team. It’s just really fun to eat there, and they take great care of their guests while making it seem so effortless.

Which ingredient is most representative of your personality?
Lemongrass. Unassuming and plain on the outside, but once you get into it, there’s so much more to offer.

If you weren’t working in the restaurant business, what would you be doing?
I absolutely love playing poker. It’s really fun to go and play for a while, trying not to lose too much, but what I love the most is meeting new people from so many different walks of life.

Name an ingredient never allowed in your restaurant.
Negativity. There will be no place for that in the restaurant. It brings everyone down and ruins the potential of any great team.

What is your after-work hangout?
I’m pretty boring. Typically, after leaving the restaurant I would just go home and relax, maybe with a beer some nights. That's about it. Ive been working as a personal chef with a really great family for a while, so lately, after dinner is finished and cleaned up, we usually hang out with them and play with the kids before going home to relax and recharge for the next day.

What’s your food or beverage guilty pleasure?
I love wings, so when we don’t feel like cooking or we just feel like being a little lazy we’ll head to Buffalo Wild Wings for quick and easy wings.

What would be your last meal on earth?
I don’t want to leave here without a huge family meal with tons of Vietnamese food, from spring rolls and bánh xèo to a variety of noodles and soups. I want the works, with all our family and friends present. That’s most important.