BEAST Craft BBQ Is Now Offering Meat You Can't Get Anywhere — Anywhere! — Else 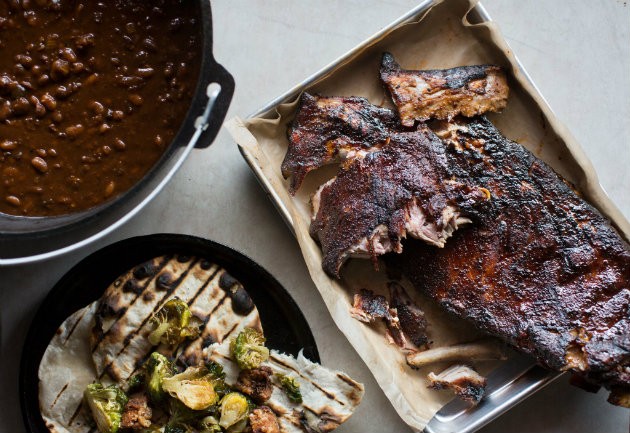 David Sandusky could coast. Since opening BEAST Craft BBQ (20 S Belt W, Belleville, Illinois; 618-257-9000) in December 2014, the acclaimed pitmaster has been at the helm of one of the bi-state area's top barbecue restaurants, winning accolades, numerous awards and legions of fans for his "all killer no filler" approach to smoked meat, including a pork steak so legendary it has become the standard upon which all other pork steaks are judged.

And it's still not enough.

"It's never enough. I want to be the best in the nation," Sandusky says. "My goal is to be a driving force for better product and better barbecue. The barbecue market is blowing up and if we're not pushing to get better, that bubble is going to pop. There is no room for mediocrity."

To that end, Sandusky has announced an overhaul to BEAST Craft BBQ, both in terms of the product he serves and the way he serves it.

"We can't be the best is we are serving the same commodity product that everyone else is," Sandusky explains. "The meat is what drives what we do, so we are now sourcing the best and doing minimal things to it. It's about respect for the animal and sustainability. It's about knowing that the animals were treated respectfully and not pumped full of antibiotics."

Though Sandusky has always been committed to using only high quality meats, his new pork and brisket are at a level not seen anywhere in the area — if not the entire country. For the last few months, he has been the only restaurant in the U.S. to use Compart Farms premium Duroc pork across his entire menu, a product so revered for its quality that it's the go-to for the competitive barbecue circuit.

"We're the only ones who have this across the entire menu," Sandusky explains. "It's not contractually an exclusive, but they only produce enough for us. There's no better product out there."

Sandusky describes the pork as unlike anything he'd ever tasted. The moment he saw it — ruby red and shockingly marbled — he knew he had to use it, even if it meant eating its substantially higher cost. "It's so glorious I was like, 'Man, how do you not take this on, even if it's three times the price?' This is a ten out of ten," he says.

BEAST Craft BBQ is also upping its brisket game, switching from already high-quality prime brisket to Waygu beef from Snake River Farms. To his knowledge, his will be the only barbecue restaurant in the region using Waygu beef for brisket.

As Sandusky explains, the changes in product will place BEAST Craft BBQ in a class of its own, turning the restaurant into a truly premium smokehouse. And that comes with a price — one that is driving the other big change that is in store for the restaurant.

Beginning today, BEAST Craft BBQ will transition to a fully a la carte menu. Gone are the combination platters and composed plates served with sides, like the ones found at traditional barbecue restaurants. Instead, guests will choose every item individually, giving them more flexibility in what they want to spend and allowing Sandusky to charge what he needs for the premium meat without giving anyone sticker shock.

"I'm losing my ass on this," Sandusky laughs. "But I've been so blown away by this product that I had to figure out a way to do it."

Sandusky believes that the new menu format will be well-received, cushioning the cost of the premium product while giving diners the ability to enjoy the best smoked meat possible.

"Barbecue is no longer about gingham tablecloths and picnic tables. We're in a revival, and we want to be a part of the small group that is pushing the envelope and raising everyone else to a higher level," Sandusky says. "There is nothing better out there than this that is able to be sold. We think this is going to make us one of the best in the nation — we think of our competition as the big destination places. That's the game we are playing."

We are always hungry for tips and feedback. Email the author at cheryl.baehr@riverfronttimes.com