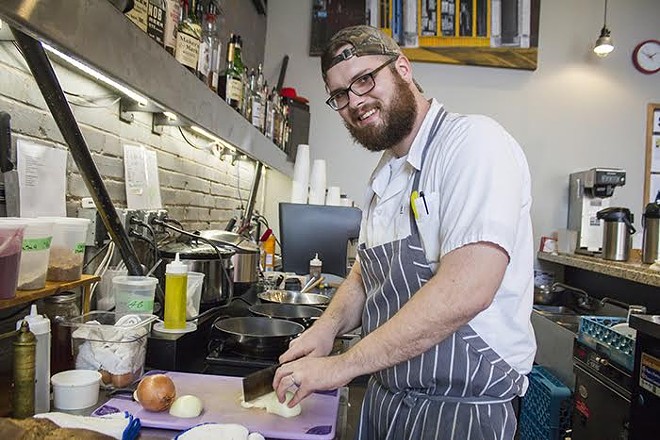 Growing up in rural Missouri, Justin Bell of Squatter's Cafe (3524 Washington Avenue, 314-925-7556) didn't have a lot of options for exploring his love of food. There was McDonald's, where he worked as a teenager, and his mom's kitchen, where he watched her make her legendary biscuits and gravy. But for Bell, the most foundational part of his food education came from the woods.

"I grew up off a dirt road in the middle of the woods, and as a kid I would go morel mushroom hunting with my dad," Bell recalls. "We'd go sassafras hunting and make our own sassafras tea. It's something that has always been there with me."

After high school, Bell left the woods for the city, relocating to St. Louis where he worked at Saint Louis Bread Company. Though he loved cooking, he did not consider it a career path and instead enrolled in trade school for heating and cooling. He graduated from the program in 2009, just as the economy tanked, and found himself unable to secure employment in his field.

He began working at CVS as a shift manager, a job he immediately realized was not for him. "I hated it. I thought I hated food service, but I hated this even more," Bell says. "I knew this wasn't what I wanted to do."

Bell could not shake the feeling that his passion for food was actually a calling, so he left CVS and enrolled in culinary school at L'Ecole Culinaire. While still in school, he got a job at the Racquet Club Ladue where his cooking style was molded by executive chef Joe Mueller. There, he got a foundation in classical techniques and was exposed to all different kinds of cuisines.

At the club, Bell would do everything from wine dinners to bar food, an experience that was like night and day from the side gig he eventually picked up doing prep for the vegan fast-casual restaurant Lulu's Local Eatery.

The juxtaposition of concepts would serve him well when he began talking with chef Rob Connoley, a St. Louis native who had recently moved back home to open a restaurant. Noting their mutual passion for foraged and wild foods, Bell asked Connoley if he had any interest in foraging together. He did, and eventually Connoley offered him a job, too.

Originally, the job offer was to be Connoley's right-hand man at his forthcoming tasting menu concept, Bulrush, and the pair began doing a series of monthly pop-ups around town under that name. However, they got restless waiting for the real estate part to come together and opened a small breakfast and lunch spot, Squatter's Cafe, so they could get started serving their food on a regular basis.

Though Squatter's Cafe and Bulrush could not be conceptually any more different (one is fast-casual, the other is tasting-menu-only), Bell emphasizes that the philosophy is the same. "The ethics of what we are doing is what holds the two concepts together," Bell explains. "Seasonality is important, as is using ingredients from local farms. Produce, grains — everything is coming from as close as possible, and we make as much as we can in-house."

Bell laughs when he gives an example of the extremes to which he and Connoley go to honor their commitment to preparing the food from scratch whenever possible. "We make our own yogurt. We even make our own wonton wrappers," he says. "I remember being in culinary school and they told us not to worry about it because no one makes their own wonton wrappers. Now, here I am."

Bell took a break from Squatter's Cafe to share his thoughts on the St. Louis food and beverage scene, his guilt-ridden love of Totino's party pizzas and why he thinks he's a little bit Cajun.

What is one thing people don’t know about you that you wish they did?
I think I'm Cajun at heart. I grew up a little country, hunting and fishing, and Cajun cuisine just hits an emotional chord with me.

What daily ritual is non-negotiable for you?
Coffee. I'm sure that's a cliche answer for a chef, but it really is a necessity to get my day going.

If you could have any superpower, what would it be?
Probably the ability to control time. Who couldn't use a few extra hours a day?

What is the most positive thing in food, wine or cocktails that you’ve noticed in St. Louis over the past year?
A return to native ingredients. Along with what Rob and I are doing with our Bulrush pop-ups, I've noticed a lot of restaurants and farmers using/selling foraged and wild foods. I think this is a very important step for our food culture.

What is something missing in the local food, wine or cocktail scene that you’d like to see?
On a recent trip to Lexington, Kentucky, I went to the Pepper Distillery, which is actually not a distillery but a collection of restaurants, a brewery, an ice cream shop and a couple of bars all occupying an old distillery’s campus. All the businesses were separate but shared an outdoor space. The energy was just really great and I had the best meal of my trip at a spot called Middle Fork.

Who is your St. Louis food crush?
Lauren Loomis, the co-owner, with her husband Robbie, of Lulu’s Local Eatery. They are the most supportive, awesome people I have ever worked for.

Who’s the one person to watch right now in the St. Louis dining scene?
This is a shameless plug but I have to say Rob Connoley. Even though Squatter's just opened, we also still have Bulrush on the horizon. I'm excited to get to work with him on these projects.

Which ingredient is most representative of your personality?
A morel mushroom. Down to earth.

If you weren’t working in the restaurant business, what would you be doing?
I would love to be a park ranger. To spend all that time in nature would make me very happy.

Name an ingredient never allowed in your restaurant.
Cool Whip or Reddi-Wip. If you can't whip fresh whipped cream, get out of the kitchen.

What is your after-work hangout?
The Silver Ballroom. It's been my Cheers since they opened. I absolutely love that bar and its staff.

What’s your food or beverage guilty pleasure?
I still love Totino's party pizzas. I have caught some flak for admitting this before, but there is just a lot of nostalgia attached to them.

What would be your last meal on earth?
My mom's biscuits and gravy. No question. But they have to be made by her out of the same cast-iron skillet she has used since before I was around.