When Bill Cawthon came up with the idea for his artisanal sausage concept, Frankly Sausages, he knew he had a winning idea. He just needed to figure out how best to get it to the public.

At first, he and his wife Jamie thought about opening up a counter-service operation inside of Six Mile Bridge Brewery in Maryland Heights, but they settled instead on a food truck so they wouldn't be tied to one location. The success of the truck led them to consider expanding their business, and when they heard about a vacant space on Cherokee Street, they knew they'd finally found the winning formula.

That brick-and-mortar, Frankly on Cherokee (2744 Cherokee Street, 314-449-1178), opened two weeks ago in the small, shotgun space that used to house Calypso Cafe. The fast-casual restaurant does not replace the food truck (it's still as operational as ever) but gives diners a chance to enjoy Cawthon's sausages without having to track down the truck.

Having a storefront also gives Cawthon the ability to finally focus all of his energy on Frankly. Since opening the truck in late 2015, the Culinary Institute of America-trained chef has been doing double duty — working at Cardwell's at the Plaza by night and doing the Frankly Sausages truck by day. He even used the Cardwell's kitchen as his commissary. Now his new restaurant gives him a chance to work fully for himself, as well as his own kitchen space.

As a result of his now-singular focus, Cawthon says to expect new dishes in addition to favorites from the truck. That includes a chicken liver mousse, served on crostini and topped with balsamic onions and chives. Cawthon is also showing off his charcuterie skills on an item so new it has yet to make it on the menu board: a spherical terrine of hog trotters, lightly breaded and served with grain mustard jus and radishes.

Frankly's classic sausages, such as a Double Star Farms chicken version topped with butternut squash and caramelized leeks, an Italian and fennel, and a beer brat all make appearances at the new storefront, as do more exotic selections, such as sausages made from lamb, wild boar and alligator.

Perhaps the truck's most famous dish, one that has nothing to do with sausage at all, is also available at the new restaurant: hand-cut Belgian-style fries smothered with molten raclette cheese. A striking cheese warmer stands just behind the order counter enticing guests to try the dish — if, that is, the intoxicating scent of the funky cheese that fills the room hasn't already done that job. 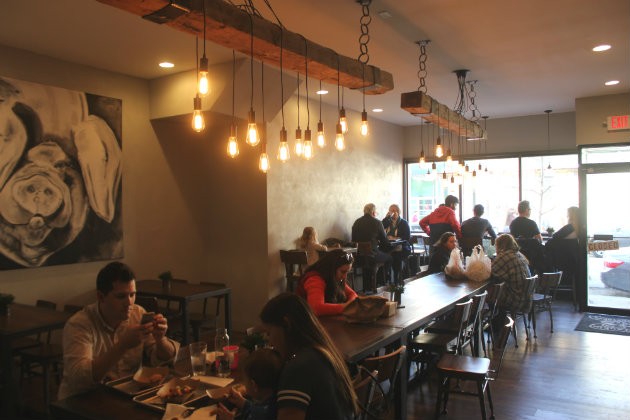 The restaurant has seating for roughly 40 people, consisting of a mix of window seats, stand-alone tables and one large communal table that runs down the center of the room. The massive piece of wood and steel (made by one of Cawthon's friends) fits in with the modern, yet rustic, aesthetic of the space.

Click through for more photos of Frankly on Cherokee. 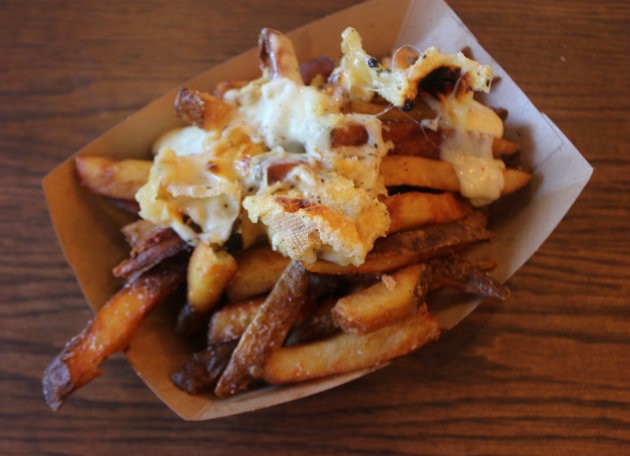 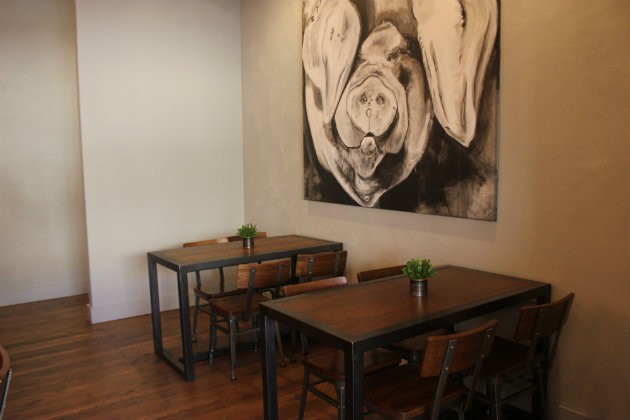