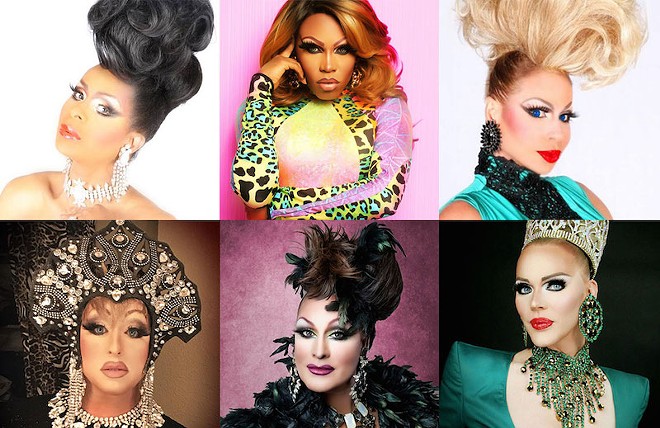 Three years after the closure of St. Louis' Hamburger Mary's franchise, the LGBT nightlife favorite is coming back — and how.

Michael Dutzer, one of the three co-owners of the new venture, said he and his partners had secured the 10,000 square-foot-space at 400 Washington Avenue. The space's huge footprint is not just big enough for the restaurant and the drag shows it will be hosting — it will be big enough to become the new home for Miss Gay America and Mr. Gay America, two pageants owned by Dutzer and his husband Rob Mansman.

"Miss Gay America has a lot of ties to St. Louis," Dutzer says. "It's where we saw it for the first time, and it always good attendance and a big following here." He adds, "It seemed like a good place for it."

Previously the home of a catering company, the space at Washington and 4th Street is getting a striking new look, but Dutzer says it didn't need major renovations. He believes the restaurant could be open as early as January, depending on when they get their liquor license.

"We're in the process of hiring now," he says.

That won't just mean kitchen staff, of course. Six queens are in the cast — with three of them moving here specifically for the opportunity. Dutzer says there will be numerous chances for locals to strut their stuff as well.

Hamburger Mary's was founded in San Francisco, and for years had a successful location in Midtown. But then local nightclub owner Mark Erney was charged with stealing from his partners in the franchise (he eventually pled guilty), and the bar's landlord lost the building to foreclosure.

Enter Dutzer and Mansman. The Baltimore couple originally built a successful pediatric dentistry business before branching out into other ventures, Dutzer says. They were looking for a home for their two newly acquired pageants when they found themselves chatting with David Pardue, who is based in St. Louis.

Pardue said he'd been wanting to bring Hamburger Mary's back to St. Louis — and the Baltimoreans said they were interested in investing, on two conditions.

"It has to be a large enough space to hold 300 to 500 guests, and it has to be high-enough caliber to host these pageants," Dutzer recalls telling Pardue. He got immediate agreement to both, he says. "And that's how Hamburger Mary's started up again in St. Louis."

Dutzer says he and his partners considered the Grove, which has historically been the home to the city's LGBT nightlife (although it's increasingly become a destination for straight partygoers as well). But they couldn't find what they were looking for there — in particular, "a space that was big enough, with high enough ceilings, for what we wanted to do," Dutzer says.

But Dutzer is sanguine about the restaurant's chances downtown. "You'd think Hamburger Mary's would cater more to LGBT people, but really it caters to everybody," he says. "They get a lot of bachelor parties. It draws a much more diverse crowd than catering to one aspect of the city. And that location is right on Wash Ave, only two to three blocks from the Arch, right by the casino, only blocks from the baseball stadium — there's a ton of foot traffic and hotels all over the place down there. It's just a great location."

For more info, and to keep an eye out for info on that opening in the new year, check out Hamburger Mary St. Louis' Facebook page.