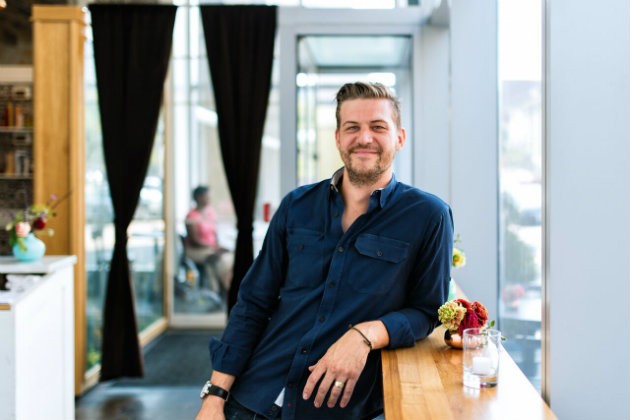 Kelly Nyikes, the bar manager at Sardella (7734 Forsyth Boulevard, Clayton; 314-773-7755), worked in one bar after another in both St. Louis and Chicago. He toiled in the wine and whiskey sales and the distribution business, studied alongside master sommeliers and scored a gig at Chicago's famed Avec. Yet he still didn't realize the restaurant industry was his calling — at least not right away.

"I went to school in Wisconsin and graduated thinking I would go to law school," Nyikes explains. "I came back here, got a job at a law firm and was taking LSAT classes. When I was in Chicago and working in the industry, I was taking graduate classes, but eventually I had one of those moments where my interests just started to shift away from grad school and academia."

While working toward law school after returning to St. Louis, he got a job at Brennan's and found himself moving quickly from bar-back to bartender even though he had very little experience. The convivial environment appealed to him right away. "I got the sense there that this job is really fun and that it fit my personality," he says.

From Brennan's, Nyikes found his way to the Royale, where owner Steven Smith taught him about much more than just drinks. "Steve was such a role model for me in the sense that he truly got what it mean to be a public house," explains Nyikes. "He created a community and brought back a space for talking about politics and culture and what is relevant to the neighborhood."

Though Nyikes loved working at the Royale and felt a sense of community in St. Louis, he and his wife moved to Chicago so she could attend medical school. There, he found himself getting deeper into the food and beverage world, first at a cheese market and wine bar and then managing a restaurant in Logan Square, where writing manuals and developing training programs immersed him in restaurant culture to an even deeper level.

Nyikes left the restaurant business for wine and whiskey sales and distribution before getting a job offer at Avec, the acclaimed Mediterranean restaurant in Chicago. There, everything he'd learned — the art of cocktails, the culture of wine, the importance of hospitality — clicked and made him realize that restaurants were where he wanted to be. "It was a massive learning experience. The place was a powerhouse and everyone was so professional," Nyikes recalls. "Watching [my colleagues] work the floor and see how they created an environment that became a special place in the food scene was so cool."

At Avec, Nyikes came to a realization that he'd been thinking about ever since his days at the Royale — that restaurants, by exploring food and drink, are a way to experience and understand culture. It was something he'd longed for in academia, only to find hiding right under his nose. "You can have a conversation about wine that goes way beyond fermented grape juice," Nyikes says. "You're talking about something that comes from a certain place with a certain culture and when you put that together with food, it creates and experience for the diner and a way of understanding things that really caught fire within me."

Now back in St. Louis and running the bar program at Gerard Craft's one-year-old Sardella, Nyikes' goal is to facilitate that conversation through the restaurant's beverage program. He's particularly excited about how he is encouraged to collaborate with the kitchen when creating his bar menu, forging a synergy with the food side of the operation. He loves this sort of experimentation.

Still, in his heart, Nyikes knows that the most important part of the job is connecting with the customers. "That one-on-one connection is what I missed when I was in the sales and distribution business," Nyikes says. "The cultural experience of eating and drinking and the convivial nature of it is what really appeals to me."

Nyikes took a break from the bar to share his thoughts on the St. Louis food and beverage community, his passion for natural wines and why he is blessed — and cursed — with a bartender's tongue.

What is one thing people don’t know about you that you wish they did?
I’m a pretty open book.

What daily ritual is non-negotiable for you?
Coffee, in any of its myriad and spectacular forms. It’s my only consistent ritual.

If you could have any superpower, what would it be?
Sailing into my thirties…a healing factor.

What is the most positive trend in food, beer, wine or cocktails that you’ve noticed in St. Louis over the past year?
Going on four months in St. Louis, I’m most impressed simply by the working bartenders of the city who run consistent, imaginative bar programs as a statement of craft and quality. This is still not a given across the country and St. Louis’ professional do it well.

What is one thing missing or that you’d like to see in the local food and beverage scene?
One exciting trend that I’d like to see more of is the highly specific concepts like Fat Rice, a cool, culinary mashup in Chicago from Macao that takes Portuguese and Chinese cues from its history and geography. Places like this seek to explore the intersectionality of geography, history, regionality, etc. They tell a story of the multitude of traditions that intermesh our family dramas and underlie the way our ancestors ate and drank and lived.

Who is your St. Louis food or drink crush?
Andrey Ivanov of Reed’s American Table because NATURAL WINES!

Who’s the one person to watch right now in the St. Louis food and beverage scene?
I am surely biased here, but I’ve been consistently impressed by Enoch Simpson from Sardella’s kitchen. He explores fresh ideas weekly, keeps the menu super seasonal and provides tons of inspiration for the bar as we share relevant ingredients both to stay seasonal and also to cut down on food waste.

If someone asked you to describe the current state of St. Louis’ food and beverage climate, what would you say?
There’s a lot of interest and passion for what’s going on in the restaurant/bar industry. Forgive me, but people are hungry for concepts that can offer that unique trifecta of strong food, service and atmosphere. The emergence of local, independent leadership groups has allowed St. Louis to emerge from a complicated culinary past with a new food and beverage identity built around authentic concepts and well-sourced ingredients. That said, certain traditions remain well-rooted, which is not all bad; having fun with our roots is great way to engage across generations.

If you were not tending bar, what would you be doing?
Sitting at one.

Name an ingredient never allowed behind your bar.
Sour mix.

What is your after-work hangout?
While I rarely get out much after work these days, I greatly appreciate Taste for their Monday and Tuesday $7 classics menu.

What’s your edible or quaffable guilty pleasure?
With booze, I’m really only guilty of having a fairly predictable bartender’s tongue; I like bitter flavors: Amari, Chartreuse, Besk and the like. They often dominate my cocktails before I’m eventually saved by my colleagues and friends who work to normalize my proportions.

What would be your last meal on earth?
I don’t really have a favorite meal in the traditional sense. I am, however, sure that I’d very much prefer to prepare my own last meal, in a nice kitchen, of which I’m fairly well-acquainted. The beverage would be wine. A white and a red… Something unique.