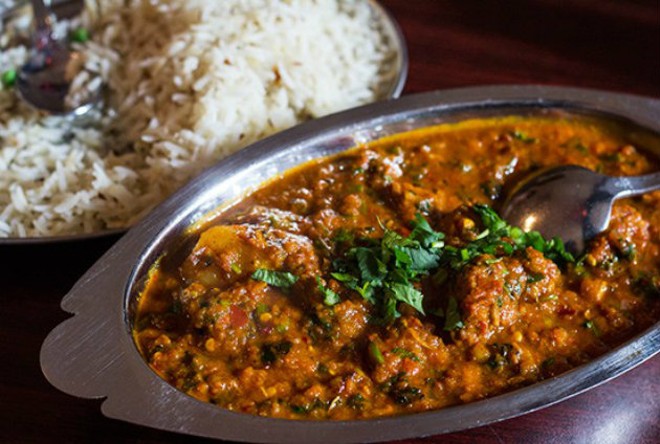 India Palace (4534 Long Road, Bridgeton; 314-731-3333), the iconic restaurant known as much for its soaring views of Lambert International Airport as its lamb vindaloo, has some shocking news: The restaurant is closing its landmark location and moving to a strip mall in Maryland Heights.

The restaurant, a multiple-year Riverfront Times Best of St. Louis winner, made the announcement via Facebook, offering few details except for the new address.

A date for the closure of the current location and reopening at the new space was not given. The space on Dorsett is the former home of Standard Brewing Company, which closed in April.

The airport-adjacent landmark in Bridgeton was the original location of India Palace. Though a sister concept opened in downtown St. Louis in early 2014, that restaurant closed in 2016.

Originally the home of a 1970s era Polynesian-themed restaurant, India Palace embraced its predecessor's Pacific Island decor, infusing it with a South Asian flair reminiscent of a long-lost civilization. Partially, the fusion of cultures and the scent of spice and coriander fueled the exotic feel, but the air of mystery also came from the fact that the restaurant itself seemed like a relic of times past.

Located at the top of an underutilized office building adjacent to an old Howard Johnson, India Palace was the bright spot in an otherwise drab part of town. You walked in at ground level, entering a dingy office building reminiscent of the kind of place you'd go to for a scam job interview, and pressed the elevator button, hoping that the machinery still had enough oomph to carry you up to the eleventh floor. Those doors closed and you said a prayer, but once they opened, they revealed a lush paradise of a restaurant with cavernous rock formations, greenery and gushing waterfalls — the Casa Bonita of Indian restaurants. 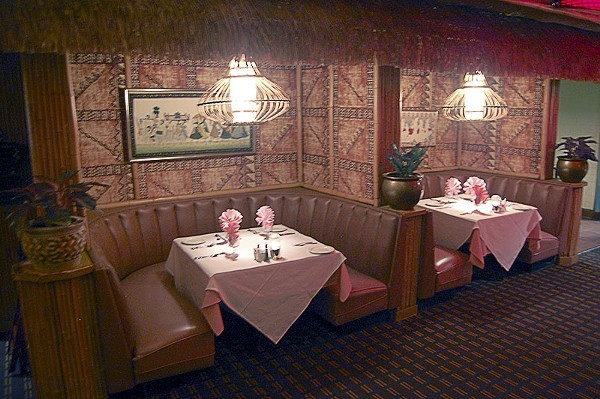 Hindu deities completed for attention with the outrigger canoes that decorated the room, but none of them could hold your gaze once the view of the airport lights came into focus. The window tables always were the first to be occupied, and for good reason. (The view was good enough that the RFT even named the place one of the area's ten most romantic restaurants last year.)

In the midst of this fantastical atmosphere, India Palace served phenomenal Sub-Continental cuisine, including its signature lamb vindaloo. No doubt, the new digs will carry on this culinary tradition, but will the food be as sweet without those twinkling airport lights?

We will update this post as additional information becomes available.