For David Kirkland of Turn, Cooking Is Like DJing 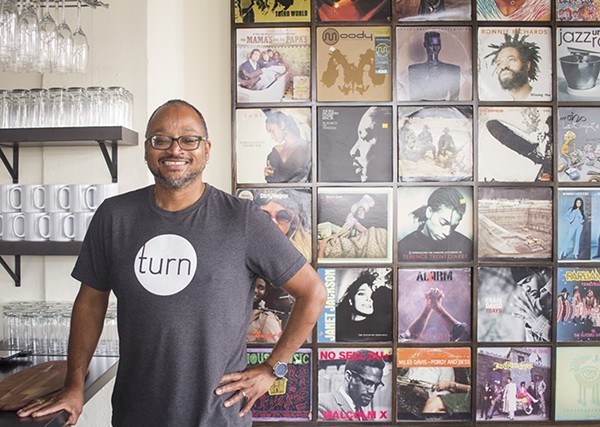 David Kirkland, the chef/owner of Turn (3224 Locust Street; 314-240-5157) laughs when he's asked about how his mom taught him to cook. "It wasn't some romanticized nurturing thing," he says. "When I got older, she worked the second and third shifts so it was more about just getting it done — take this, put it with that. Basically, 'Don't be a boneheaded boy and mess this up.'"

As much as he jokes about his mom's cooking lessons, Kirkland is all seriousness when he describes the influence her interest in food had on him at a young age. A "foodie before there was such a thing," she took him out to eat at her favorite restaurants, where he was exposed to dining culture. They weren't always the most sophisticated places, he explains, but the act of going out to eat was impactful.

Kirkland credits one of his mom's favorite haunts with making a lasting impression on him and setting the stage for his future culinary endeavors. "The place that impressed me the most was Famous-Barr," he explains. "We would sit at their lunch counter and have their French onion soup. It just blew me away. I always kept that taste in my mind and tried to recreate it."

His recreation of the famed soup meant opening a box of store-bought consommé and adding fried onion to it. "I thought I was really doing it," Kirkland chuckles. However, after he found himself working in professional kitchens to make money, he dabbled in perfecting his soup recipe.

"Every time I'd work somewhere I would try to make it," Kirkland says. "I never had a recipe, but I just tinkered around with the taste that I had in my brain. I was looking for the feeling I got when I used to eat it. So I would experiment with the broth and the right amount of red wine and caramelizing onions a certain way to get the proper sugar ratio. Making that soup layer by layer is the way I learned how to make soup. It's the way I learned how to cook and the way I approach cooking to this day."

Cooking became a passion for Kirkland, and he set out to San Francisco with his sights on culinary school. However, when he got there, he became painfully aware of the high cost of living and decided against going. In fact, he got out of the restaurant industry altogether, instead opting instead for a career in retail at Crate & Barrel.

Though he loved the retail business, Kirkland needed a creative outlet and turned to his other passion: music. By day, he would work at Crate & Barrel and by night, he would DJ in and around the Bay Area. "Music has always been a huge part of my life ever since I bought my first 45 when I was a kid," Kirkland explains. "I liked DJing because you are producing live and layering music — it's exactly the same movements as cooking."

Kirkland eventually made his way back to St. Louis where he continued to work in retail until he was given the opportunity to get back into the kitchen. In need of a change, he took the leap, teaming up with the owners of Bowood Farms to open their then-new restaurant, Cafe Osage.

Kirkland worked at Cafe Osage for nearly a decade before deciding to strike out on his own, opening the breakfast and lunch spot Turn in Grand Center's new arts space, the .ZACK building. "I always had the menu component in my mind, but there was a big learning curve with using my own money and doing it for myself," Kirkland explains. "But the timing was perfect. At this point in time, I have the assuredness to do something like this."

That assuredness translates into a thoughtful menu of elegant yet comforting dishes that Kirkland has been perfecting throughout his culinary career. Though he is confident he's putting out good food, he has a secret way of seeing if his guests are enjoying things — and, funny enough, it's the same way he judged his DJing skills.

"Good cooking, like dancing, makes people move their bodies," Kirkland says. "When people do a little dance in their seats, I know I am doing something right."

Kirkland took a break from the kitchen to share his thoughts on the St Louis restaurant scene, his favorite spots around town, and his "corny" personality traits.

What is one thing people don’t know about you that you wish they did?
I like to fly kites as often as possible.

What daily ritual is non-negotiable for you?
Music and iced coffee.

If you could have any superpower, what would it be?
Flight.

What is the most positive thing in food, wine or cocktails that you’ve noticed in St. Louis over the past year?
Comfort food is back!

What is something missing in the local food, wine or cocktail scene that you’d like to see?
Not much. There are a lot of restaurants in St. Louis that are covering all of the culinary and beverage trends happening now.

Who is your St. Louis food crush?
Not a fair question, but if I had to narrow it down to two it would be Hiro and Público.

Who’s the one person to watch right now in the St. Louis dining scene?
Obviously Vicia and Katie's Pizza & Pasta Osteria are killing the game, but I think people are sleeping on Urban Chestnut Brewing Company in the Grove.

Which ingredient is most representative of your personality?
Polenta: corny, satisfying and warm.

If you weren’t working in the restaurant business, what would you be doing?
Retail sales. I love working with people.

Name an ingredient never allowed in your restaurant.
Chitterlings. Never liked them.

What is your after-work hangout?
Home with friends and family.

What’s your food or beverage guilty pleasure?
Kettle corn, sunflower seeds and bourbon, not in that order.

What would be your last meal on earth?
Hung ley curry at Fork & Stix.