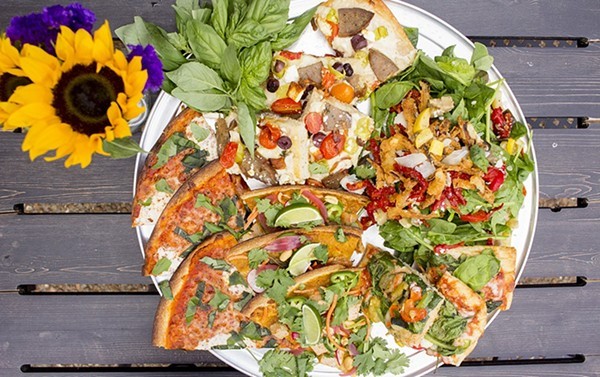 Fans of Humble Pie (9783 Clayton Road, Ladue; 314-997-7070), the takeout pizzeria from the owners of Fozzie's Sandwich Emporium, are dealing with some disappointing news. The restaurant, which shuttered October 11 for what was supposed to be a menu update, is now permanently closed.

"We were really excited about it, and we loved the menu, but the space just wasn't big enough," Lucas explains. "We were doing our own doughs and sauces, and you just need a larger skilled staff to do those things. We thought about retooling the menu, but in the end, we didn't want to compromise what we were doing just to fit the space."

Humble Pie opened this past April to positive reviews in the former Red-L Pizza space in Ladue. It took over a building that had its quirks. Though a charming facade and patio greeted diners who pulled into the strip-mall parking lot, the scene was only a facade. To patronize the restaurant, would-be diners had to walk around the side of the building, through an alley, and enter a tiny vestibule barely large enough for an order counter.

The quirks gave Humble Pie a charming speakeasy vibe, but as Lucas explains, that feel did not work for their more upscale concept. "We were going for the Fozzie's grab-and-go thing, but I think Humble is better suited as a sit-down concept," says Lucas. "Pizza is good for takeout and delivery, but what we were doing is better suited for somewhere you can sit and have a glass of wine."

She adds, "It was the right concept but the wrong space."

However, the news of Humble Pie's closure is bittersweet for the Lucases, as it marks the beginning of a new chapter in their culinary careers. The restaurateurs are renovating the space and rebranding it as Dottie's Flour Shop, a brick-and-mortar retail spot for the bakery Lucas owns with her business partner, Dottie Silverman.

"This all happened organically," Lucas explains. "Dottie and I wanted to do our own sweet pies and granola, and we started that because of Humble. It was so well-received that it took on a life of its own. We started doing special orders and taking on clients and before we knew it, we were looking for a space of our own."

For Dottie's Flour Shop, Lucas envisions an open retail shop that will include both baked goods, liked bagged cookies and granola, and boutique household items such as fun aprons or dessert platters. She and Silverman will use the retooled kitchen to prepare items for the shop as well as special orders.

Lucas says that she and Silverman plan on utilizing the building's front patio area — the space that was the Humble Pie facade — for special promotions, like a Saturday-only retail window. "We are very social-media-driven, so we'd like to keep up that component with special promotions," she adds.

Like Humble Pie, Dottie's Flour Shop uses all organic ingredients, and has a large selection of vegan options, something that she feels sets the bakery apart. That continuity in both philosophy and space makes this seem less like an end for Humble and more of the beginning of something new.

"We don't feel like this is the end of Humble Pie, but more like we are putting it on the back burner. Eventually, we might do it in a different location, but for now we are focusing on Fozzie's and Dottie's," Lucas explains. "This all has slowly taken itself on a path of its own, and I feel like this is what is meant to happen now."

We are always hungry for tips and feedback. Email the author at cheryl.baehr @riverfronttimes.com.