Squatter’s Café (3524 Washington Avenue) is a new breakfast and lunch concept taking over — squatting if you will — the space previously occupied by Magnolia Café in the KDHX building in Grand Center. It opens today.

Chef Rob Connoley, a St. Louis native, returned to his hometown last year after running much-lauded restaurant the Curious Kumquat in New Mexico. He has been hosting pop-up dinners over the last year in preparation for the opening of a new restaurant, also focused largely on foraged ingredients, called Bulrush.

Connoley has big plans for that restaurant and is taking his time to do it right. In the meantime, he sought a smaller, simpler concept to keep him and his sous chef, Justin Bell, busy and practicing.

Take the first item on the menu — yogurt. Presented in a glass jar you get to take home with you, it’s built for “discovery.” As a diner tries it, Connoley eagerly peers over her shoulder, playfully asking, “Ooh, what’s that?” and then, “What’s happening?” as she encounters the hard white ball hidden within. When she cracks it open, a vibrant violet huckleberry sauce spills into the yogurt.

Every dish on the menu offers a surprise, whether it’s literally tucked away to be discovered during a bite, presented as an unexpected flavor in a dressing or as a unique preparation of a heretofore straightforward vegetable.

Another inventive section of the menu is called simply “dollops” — a collection of sauces that may prove tasty added to whatever dish you wish: pesto, sweet tomato sauce, duck confit, butterscotch or lemon curd and bacon jam.

As at the Curious Kumquat, the Squatter’s Café menu is entirely local, save for a beloved ingredient of Connoley’s, wild rice — found only in the northern Great Lakes region. 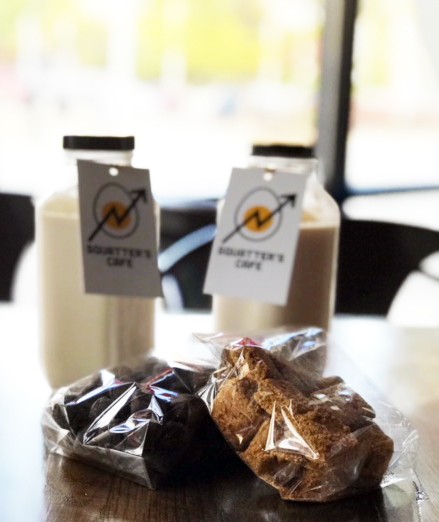 Everything is crafted in-house, including the yogurt, pecan milk and pickles (served with honey). The kitchen operates on a no-waste policy; virtually all vegetable scraps are transformed into ingredients for other dishes. All dishware is to-go and compostable, made from sorghum grass.

Scroll down for additional photos of the menu and space.