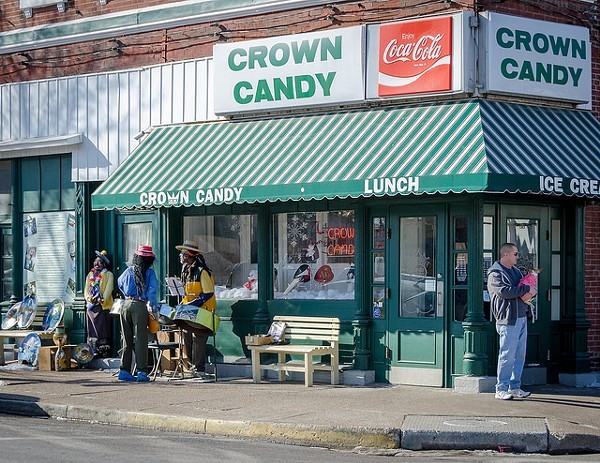 The owner of Crown Candy Kitchen, Andy Karandzieff, was on vacation last week when a friend from high school texted him about the news that had suddenly gone viral — Karandzieff's beloved restaurant and candy counter wasn't being replicated in the heart of suburbia, was it?

A satirical Facebook page, Unofficial: The City of Edwardsville, had published a post claiming just that. And while the page is marked satire, and has no history of ever breaking news, the news was apparently exciting enough that at least half of Metro East threw their skepticism to the wind and did their part to spread the news. It drew thousands upon thousands of shares.

For Karandzieff, the fake news — which has since been deleted from the page — was doubly frustrating. Not only was it flat-out not true, but it was written in a way that only served to scare suburbanites from visiting the beloved candy shop and soda fountain.

"Have you ever wanted to visit Crown Candy Kitchen in North St. Louis but were afraid of dying?" the post began, before falsely claiming the city of Edwardsville had arranged to license the business concept. "Enjoy the authentic soda-fountain fare less the bullets and the muggings!"

"People did call and say, 'I heard you're opening in Illinois; when's it going to happen?'" Karandzieff says. But even as he tried to swat down the rumors from his Caribbean getaway, his blood boiled. "To some people, those jokes about dodging bullets are funny, haha. But that's part of the problem. People read that and they believe it.

"They're saying that if you go to the city, and you see black people, it might be dangerous."

For Karandzieff, whose grandfather started Crown Candy Kitchen in its current location all the way back in 1913, it's been a hard autumn — and, in fact, a few hard couple of years. Old North is a charming neighborhood that's drawn young families and art galleries and boasts a popular art walk. But many people who've never visited hear "north" and "St. Louis" in the same sentence and freeze.

For a long, long time, Karandzieff has been victorious in getting people to come in spite of that — Crown Candy is famous for its long lines out the door on weekends. But in some ways, the restaurant may be a victim of its own success. Some people stay away because they assume those lines must be omnipresent (to quote Yogi Berra, "Nobody goes there any more; it's too crowded"), even as Karandzieff says that's simply not true on weekdays or even once you get past the heart of summer.

What's more hurtful, though, Karandzieff says, is the perception that the fake Edwardsville page reveled in: That Old North is dangerous.

He believes that perception really set in for many people in the greater metro area after the protests that followed Michael Brown's shooting in Ferguson in August 2014. Never mind that Ferguson is nowhere near Old North, and that protesters never targeted the neighborhood. The protests that began again this September, after the acquittal of former St. Louis cop Jason Stockley, hit his business even harder, with many suburban visitors — and even many city regulars — staying home for days on end, he says.

Once people get it in their heads that the city isn't safe, he says, it can just be easier to stay home.

"I get it," he says. "I understand people have lots of choices, and lots of great restaurants around the city and the county. But you take for granted places like Crown Candy will always be here — that's not necessarily the case. One day, you wake up and they're gone."

He's not there yet, he hastens to add. But he wants to remind people who profess to love his restaurant that his fate is in their hands. He and his wife recently took to Facebook to urge people not to forget about them.

"This is 104 years of my family on this corner," he says. "I don't want it to be on my watch that we say we can't do it no more. We're not there now. But we've got to be proactive. And we need people to come down to the city. We need people to get out and support neighborhood restaurants."

It's not just Old North, he notes. "I'm suffering, but I know people in better areas who are suffering too." He thinks about the woman he and his wife met at the airport at 5 a.m. as they were heading out of town on their vacation two Sundays ago. When Karandzieff told her that they owned Crown Candy, she admitted she'd never been to the neighborhood.

"My husband says we can't go to the city because it's just gotten so bad down there," she told him.

"People act like it's Escape from New York," he says. "It's frustrating. It really is."

He wants St. Louis — and St. Louis County, and even Edwardsville and the far-flung Illinois suburbs that were freaking out about the possibility of a Disney version of Crown Candy Kitchen coming to their stomping grounds — to get out and "move around."

"You can come here and you'll be just fine," he says. "Now, you don't want to leave your laptop laying out there on the front seat, but you wouldn't do that in the county. You don't want to be stupid. But don't be afraid. The city is a great place."