How Steve Ewing Went from Rock Music to Hot Dogs 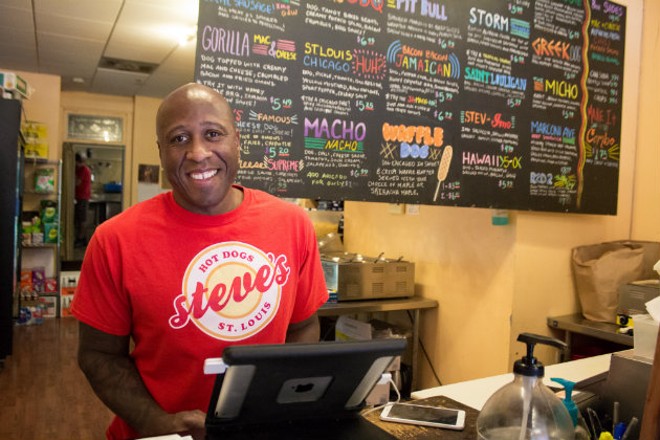 Several years ago, after playing a gig with his band the Urge, Steve Ewing was struck by what he saw as a missed opportunity — and it had nothing to do with music.

"We'd finish playing a show and I would turn to my guitar player and ask him, 'Why are we not feeding people here?'" Ewing recalls. "We'd be in a bar, the show would let out and all of these people would be looking for something to eat. They'd end up at White Castle or some place like that, and I couldn't help but think that if there was something to eat here, they'd eat it."

Before becoming the namesake of the popular restaurant Steve's Hot Dogs, Ewing achieved fame as the frontman from the Urge, the St. Louis-based outfit that shot to fame in the mid-1990s. As Ewing toured the country playing shows, he could not help but notice the vibrant street food that made late-night eating an exciting endeavor.

"All over, especially in places like Chicago, New York and New Orleans, vendors were feeding people outside of show venues," Ewing explains. "At all hours of the night, there was always something to eat."

While living in Los Angeles in the early aughts, Ewing had a front row seat to the city's burgeoning food truck and street food scene. When he moved back to St. Louis in 2006, he was busy with his music by night, but he needed something to do during the day. A food cart, like the ones he'd frequented in L.A., seemed like the right idea.

"I decided to do hot dogs because they seemed like the best way to start for someone like me who has never been in the restaurant business," says Ewing. "I looked at a place like Woofie's, which was doing Chicago dogs, and I wanted to take it to the next level."

Ewing began Steve's Hot Dogs as a simple hot dog cart operation that he set up outside of a soap factory in north St. Louis. The success of the cart propelled him to up his game. He began doing more gourmet options, expanded his menu and began taking his cart to festivals.

All the while, Ewing was eyeing a storefront on the Hill that he thought would be the perfect location for a brick and mortar restaurant. When the woman who was leasing the spot decided to shutter her business, Ewing swept in, took over her lease, bought her equipment and opened the first permanent location of Steve's Hot Dogs in 2011.

Not long after, Ewing was approached by the owner of the Royale, who asked him to open a second spot next to Tick Tock Tavern in Tower Grove East. Ewing set up an Indiegogo campaign to raise startup funds, and was overjoyed when he met his modest fundraising goal in no time. Within a month and a half of launching the campaign, he opened his second location and has never looked back.

Ewing admits he was not much of a culinarian growing up, but he feels at home as restaurateur, even if it happened by chance. "I never thought I would be in the food industry," says Ewing. "But business-wise to me it was so interesting and fast-paced."

Ewing took a break from the hot dog business to share his thoughts on the St. Louis food and beverage scene, food crushes and his love of whipped cream covered cheesecake.

What is one thing people don’t know about you that you wish they did?
I'm a homebody. I'm out a lot, but I like hanging in when I can.

What daily ritual is non-negotiable for you?
Early morning gym session. It sets the rest of the day in motion.

If you could have any superpower, what would it be?
Teleportation.

What is the most positive thing in food, wine or cocktails that you’ve noticed in St. Louis over the past year?
Lots of niche restaurants and new small concepts.

What is something missing in the local food, wine or cocktail scene that you’d like to see?
A couple of years ago I would have said ramen, but we are killing it now!

Who is your St. Louis food crush?
Guerrilla Street Food.

Who’s the one person to watch right now in the St. Louis dining scene?
I like David Bailey's concepts.

Which ingredient is most representative of your personality?
Brown sugar. Sorry, couldn't help it!

If you weren’t working in the restaurant business, what would you be doing?
Playing music, of course! Or music production.

Name an ingredient never allowed in your restaurant.
Coconut.

What is your after-work hangout?
Tick Tock Tavern or Sandrina's.

What would be your last meal on earth?
An entire chocolate chip cheesecake with ALL the whipped cream!