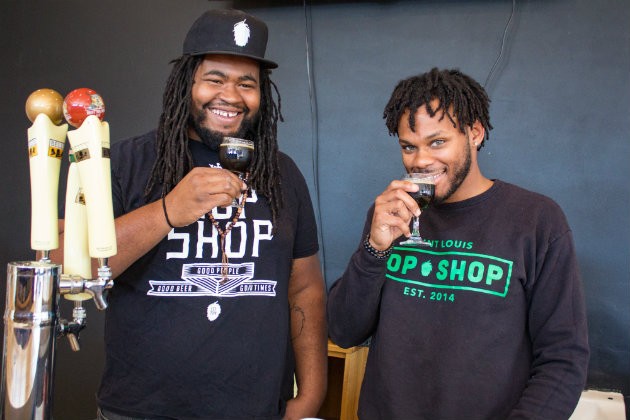 "We were at our house playing a game and were out of beer," Harris explains. "We wanted to go out and get something, but the only places that were open at the time had very limited selections. St. Louis has this history of craft beer, yet there were no craft beer retail shops in the city. It was mind-boggling to us."

Before setting out to fill the void, the two were on decidedly different career tracks. For Griffin, 28, degrees in both industrial organizational psychology and management from Northwest Missouri State led him to Enterprise Rent-A-Car's management training program. As for Harris, 30, a small engine mechanic by trade, he found himself in the retail business, working everywhere from lighting and clothing stores to Whole Foods.

Though both were doing well in their chosen fields, Griffin and Harris, who are brothers, wanted to go into business together. When they developed a shared passion for craft beer — and noticed the lack of a proper bottle shop in the city of St. Louis — an idea began to take shape.

"We'd been going over the idea for some time and really wanted to have the opportunity to connect people through beer and just do something different," Griffin explains. "We're both creative and risk-takers, and we finally decided that we couldn't wait to do it. We felt like if we could work this hard for others, why not do it for ourselves and see where it could take us?"

Before opening the doors of St. Louis Hop Shop, they met with local craft ad home brewers to see what they thought of the bottle shop concept. Unequivocally, they found validation.

"I think people were really excited not just about the beer, but that it was one more place that was celebrating what's local," Griffin explains. "Our shop was a way to promote shopping in the city. People gravitated toward that."

Any doubts about their concept were erased when they opened their doors in 2015. Instantly, St. Louis Hop Shop became a go-to destination for anyone interested in craft beer, as well as a community gathering place. The shop has become so popular, in fact, that Harris and Griffin have had to expand, moving to a larger space just down the street earlier this month.

Harris and Griffin credit their success to their approachable, service-oriented style. It also doesn't hurt that the shop is a family affair — something that could be tricky to navigate if the two weren't such close friends.

"I think the reason we work well together is because we are so different. Also, for better or for worse, we know what to expect from each other," Harris says.

Griffin and Harris took time away from the shop to share their thoughts on the St. Louis food and beverage community, their daily rituals and why Cherokee Street is the place to watch in the city.

What is one thing people don’t know about you that you wish they did?
Ryan: I’m a very positive individual; no matter the situation I keep a cool demeanor and think on the bright side.
Justin: I’m a pretty big deal. Also, I have a pretty good sense of humor.

What daily ritual is non-negotiable for you?
Ryan: I go through my sock drawer and pick out the most comfortable pair I can find.
Justin: I have to have my tea in the morning.

If you could have any superpower, what would it be?
Ryan: That’s a tough question to answer. I’d love to predict the future.
Justin: Teleportation. It’d be pretty cool to be able to be anywhere at anytime.

What is the most positive trend in food, beer, wine or cocktails that you’ve noticed in St. Louis over the past year?
Ryan: I’ve noticed a positive trend in local taps across St. Louis. It shows that our city has a lot to offer within the beer market and people are interested to try them all.
Justin: People have become very selective with their diets. There is also a ton of culinary diversity in St. Louis. I don’t know the last time I have went out to eat at a restaurant that wasn’t locally owned. As far as beer goes, it seems like there is a brewery for every neighborhood in the city, and that’s pretty awesome.

What is one thing missing or that you’d like to see in the St. Louis food and beverage scene?
Ryan: I’d love to see more and more diverse styles of food. It’s exciting to see so many to choose from. I enjoy watching the food and beverage scene grow locally because there is so much we still have left to uncover.
Justin: Honestly, I don’t know. I really like what we have going. If I had to make one suggestion it’d be more late night fare.

Who is your St. Louis food or drink crush?
Ryan: That changes periodically. I can keep it traditional with Imo’s, though. They have stayed pretty consistent over the years, in my opinion.
Justin: That changes as often as the weather. Honestly, take your pick of any restaurant on Cherokee Street.

Who’s the one person to watch right now in the St. Louis food and beverage scene?
Ryan: I’d say Earthbound Brewery right here in south city! They’ve opened a new location right up the street from us that’s pretty awesome. Very excited to see how they utilize their recent expansion.
Justin: There are a few new restaurants that I have to try, but I’m particularly looking forward to Good Fortune opening up, as well as Rockwell Brewing Co.

Which ingredient is most representative of your personality?
Ryan: I’d say water. I’m pretty free-flowing and can adapt to any setting.
Justin: I’d have to say brettanomyces; it brings the funk to the party.

If someone asked you to describe the current state of St. Louis’ food and beverage climate, what would you say?
Ryan: I love the current state of our city’s food and beverage scene. I think it has a lot to offer and there are plenty thriving businesses that help anchor many industries. New restaurants and new pubs/breweries are still opening every few months and it continues to keep our city on its toes for what’s next.
Justin: I truly believe St. Louis has a very solid food and beverage scene, whether you're looking for fine dining to dive bars. As far as the beer scene, it’s amazing. It really seems that each neighborhood has its own brewery that’s pretty unique to that area.

What is your after-work hangout?
Ryan: I typically spend it at home enjoying a beer and some type of sports entertainment.
Justin: My living room, dominating on FIFA.

What would be your last meal on earth?
Ryan: Some of my grandmother’s cooking. She has some of the most delightful dishes I have ever witnessed in my 28 years of living.
Justin: A feast of side dishes.