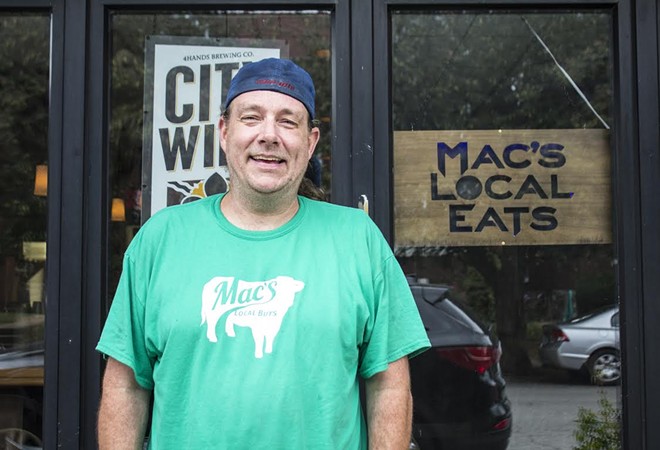 Chris "Mac" McKenzie, the chef/owner of Mac's Local Eats (1225 Tamm Avenue, 314-479-8155), had no idea what he was getting himself into when he posted on a local food message board asking if anyone wanted to go in on a whole Red Wattle hog.

"I just wanted to eat better meat, so I put up a post on STL Bites," says McKenzie. "I did it several times and started to feel bad that I was wasting their bandwidth, so I started emailing friends and family directly. It just kept growing until one day my wife looked at me and asked, 'Why are there all of these coolers here?'"

In retrospect, McKenzie always had a passion for "real" food. He knew that using quality, seasonal ingredients was important, but it wasn't until he dined at Monarch, with chef Josh Galliano at its helm, that he had a revelation.

"One night my wife and I had dinner there and he kept bringing out course after course," McKenzie recalls. "I remember asking him how he did it." When Galliano explained the sources of his meat and produce, McKenzie knew he wanted to not only eat better food, but to devote himself to helping others do the same.

For six years, McKenzie served as a produce and protein middle-man for friends and family looking for access to quality food. He made things official in 2012, launching Mac's Local Buys as a CSA and whole animal share with the goal of giving his customers access to nutrient-dense, consciously raised ingredients at an affordable price. As he cultivated relationships with producers and chefs, he became further immersed in the St. Louis food scene, developing a reputation for his commitment to his mission to help people eat better.

Though McKenzie was content running Mac's Local Buys, he couldn't say no when his friend Bob Brazell (of Byrd and Barrel) approached him about doing the food service in his bar, Tamm Avenue Grill. "I'll be damned if I wasn't talking to my wife four days earlier about opening a little shack doing smash burgers," recalls McKenzie. "Then Bob called and the rest is history."

That restaurant, Mac's Local Eats, looks like a simple fast-food window in the back of a bar — and in many ways, that's what it is. Fries, burgers, pork sandwiches, and bacon and onion dip satisfy the need for greasy food to soak up the beer.

For McKenzie, however, the restaurant exists to show people that quality meat is not reserved for white-tablecloth restaurants.

"It's nothing magical what we're doing," McKenzie explains. "It's just that the conventional food system has warped everyone about eating. We're the only species on the planet that is so disconnected from our food source. Something had to die so that you could live, and you need to respect that."

McKenzie took a break from the restaurant to share his thoughts on the local food scene, why diners should be aware of "greenwashing," and the one thing you'd never see inside his restaurant — besides factory-farmed meat, of course.

What is one thing people don’t know about you that you wish they did?
That I wouldn’t be doing any of this without the unending support and hard work of my wife, and that Mac’s Local Buys literally started with a post on the food forum stlbites.com.

What daily ritual is non-negotiable for you?
Listening to Phish.

If you could have any superpower, what would it be?
The ability to bring people back to life, if only just once. I’d bring back my dad so he could see what I’m doing and my son could meet his grandpa.

What is the most positive thing in food, wine or cocktails that you’ve noticed in St. Louis over the past year?
Too many to list.

What is something missing in the local food, wine or cocktail scene that you’d like to see?
Transparency. I tell people all the time, local doesn’t mean good; it means close. There are local conventional pig farms that are pimped as high-quality proteins on menus across the city. Few things frustrate me so much as purposely confusing consumers about sourcing products (aka "greenwashing"), which is why, at this point, Mac’s Local Buys is effectively a consumer advocate.

Who is your St. Louis food crush?
Two groups. First, the local farmers taking the time to make high-quality, nutritious produce and proteins. Places like Meadowlark Farm, Such & Such, Circle B Ranch, Bellews Creek Farm and Side Lot Farms to name a few. Second, the handful of chefs who actually make it a point to consistently source said high-quality local products. I’m talking at you, John Perkins of Juniper, Kevin Willmann of Farmhaus, Chris Meyer & Mike Miller of Kounter Culture, Anthony Devoti of Five Bistro and Josh Poletti.

Who’s the one person to watch right now in the St. Louis dining scene?
My staff. Nick Wegman, Ryan Maher & Sam Nawrocki are killing it. And they don’t steal pickles.

Which ingredient is most representative of your personality?
Anything that is made with love and care from artisan producers, not the least of which is the beer from Civil Life Brewing Company or the granola from Banner Road Baking Company.

If you weren’t working in the restaurant business, what would you be doing?
Hard to say, but preferably something near a beach and mountains — or, even better, slinging grilled cheese sammies on a Phish tour.

Name an ingredient never allowed in your restaurant.
Ranch dressing. My staff knows this all too well.

What would be your last meal on earth?
My grandma's fried chicken, creamed corn and green beans. To this day, the best I’ve ever had.