Mariscos el Gato's Chef and Owner Part Ways, with the Chef to Reopen in Bevo Mill 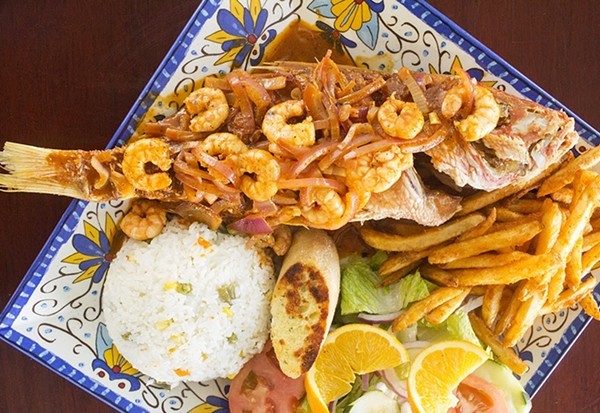 In the mind of owner Carlos Dominguez, however, Mariscos el Gato is staying put in its Cherokee Street location, reopening tomorrow after a brief closure due to a remodel.

According to Nancy Diaz, the confusion reflects the disillusion of the partnership between the couple and Dominguez, with both parties claiming rights to the concept.

"My husband is the main chef. He came up with all of the items and put the menu together," explains Nancy Diaz. "He is 'el Gato,' after all. That's his name. I don't know why he wants to use it if he's not going to be there."

According to Diaz, when Mariscos el Gato first opened, she and her husband agreed to a 50-50 partnership with Dominguez, though that never materialized. Instead, they were placed on a day-rate and given no profit sharing as originally promised. "We didn't know anything about business," Nancy Diaz explains. "We were new to this so we didn't know how it worked."

After becoming increasingly frustrated with the situation, the Diazes decided to part ways with Dominguez and open their own Mariscos el Gato at 4561 Gravois. According to Nancy Diaz, the restaurant's name is registered to her husband, and the dishes are entirely his. As such, they will open under the name Mariscos el Gato with the same menu, hopefully by the end of this month, regardless the status of Dominguez's Cherokee Street location.

"I want everyone to know that when they go to the restaurant on Cherokee Street, my husband will not be there," Nancy Diaz says. "People come in there looking for him all the time. I don't want them to be fooled."

The Diaz's selection of the Bevo Mill neighborhood for the new Mariscos el Gato marks one more addition to the area's burgeoning Mexican restaurant scene, in an area that was once home to the city's Bosnian population. As its former residents have moved out, members of the local Latin community have moved in — a transition that has led the neighborhood's real estate developer Tony Zanti to call the area "the next Cherokee Street."

Nancy Diaz is excited for this possibility. "We're really excited and look forward to working with the other restaurants in the neighborhood to help each other out," she says. "We have a friend who makes Mexican desserts who is thinking about moving to the neighborhood. If all goes well with Mariscos el Gato, my husband and I also hope to open a Mexican grocery store."

Whether you will be able to experience that feast on Cherokee Street or Gravois remains to be seen — though Nancy Diaz assures her guests that the soul of the restaurant has relocated to Bevo Mill, with a new location in the space previously inhabited by Luna Lounge.

"My husband is 'el Gato," she says. "This is his food. I don't know what is happening with the Cherokee Street restaurant, but 'el Gato' won't be there."

The restaurant posted a brief statement to its Facebook page about the transition over the weekend. Translated to English from Spanish, it reads,

Attention: For personal issues, we have closed Mariscos El Gato on Cherokee Street! We are opening our new place next to Mi Lindo Michoacan. 'El Gato' will no longer be on Cherokee Street. We will see you in our new restaurant.