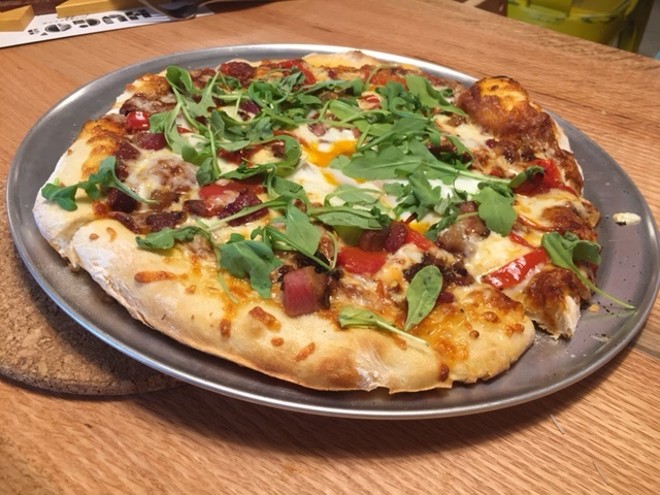 Befitting a spot named for a four-year-old, Hugo's Pizzeria (3135 Olive Street, 314-896-4846) is a friendly, cheerful kind of place. Your first clue upon arrival might be the bright yellow chairs: If you're going for ponderous, you generally do not include a pop of sunshine.

The pizzeria, which opened last Wednesday in Midtown across the street from the Pappy's/Southern juggernaut, is something new for the homegrown Baileys' Restaurants empire. Restaurateur Dave Bailey has shown he can do desserts (Bailey's Chocolate Bar), burgers (Baileys' Range), brunch (Rooster), sophisticated bar food (Bridge) and even vegetarian (Small Batch). This restaurant, named for his young son Hugo, is his first attempt at pizza.

In true Dave Bailey fashion, Hugo's is less interested in following an "authentic" version of what others have decreed pizza should be and more in making one that he's excited to eat. It's been described as Roman-style, but Bailey acknowledges that he developed the pie through careful experimentation, and then came up with the words to orient diners. 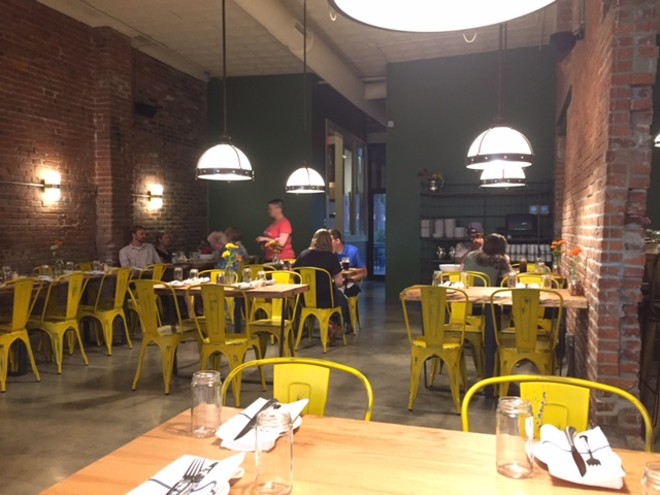 "The bottom has a little bit of crunch, because it's cooked on a nice hot stone," he says. "But then there's enough rise that it's like a pillow on top. It's a really good chew." The flour is aged for twelve to fifteen hours for a complex note.

The result, topped by Hugo's signature sauce — "a little sweet and a little spicy, just like Hugo is," Bailey says — is a singular pie. It's both familiar enough to be comforting but unique enough to be instantly recognizable. Topped with a host of fresh offerings, including house-made pepperoni, it's a definite winner.

Pizza runs from $12 to $14 for a pie that's big enough to serve three hungry guests. Gluten-free crust is available, as is a vegan cheese. Bailey promises to be an oasis for gluten-free diners. "If you're gluten-free, your menu is everything except the meatballs," he promises. "There's not a lot you're going to miss out on."

Other options include four salads, available in sizes large ($10) or small ($7) and a half-dozen appetizers, including wings with a spicy or sweet herb sauce. Hugo's is justifiably proud of its bar menu: There's a full roster of cocktails, a smartly curated wine list and a host of craft beer on offer.

A creative kid's menu is also available — because, yes, you have to have a kid's menu at a place named for a four-year-old.

The restaurant's dining room is located in the spot that pizza lovers will remember as the original home of the Good Pie, chef Mike Randolph's much beloved authentic Neapolitan spot, which blew St. Louis' mind before relocating to the Delmar Loop and then closing. The brick walls will be familiar from that spot.

But Hugo's is much bigger than the Good Pie was. Randolph's spot only took one bay of a four-bay building; Hugo's is already using three, with a dining room in one bay, a bar and additional seating in another, and a sizable kitchen in the third. In the fourth bay, Bailey says, he'll eventually be opening a second restaurant, one that shares a kitchen with Hugo's.

Suffice it to say, Dave Bailey is bullish on Midtown. "With Small Batch around the corner, we've been in the neighborhood a long time," he says. "We think it's well-placed in regards to SLU, the connectivity to downtown, Cortex, and all that other stuff. From a location perspective, it's kind of a perfect place." 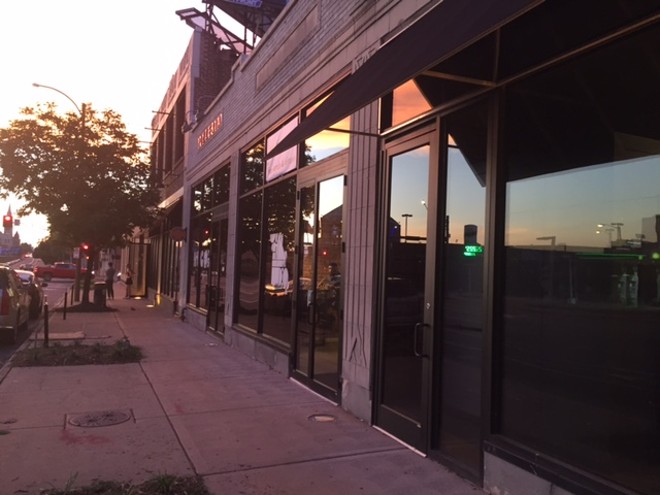