At Mac's Local Eats, They'll Be Cooking a Whole Pig, Boucherie-Style, This Sunday 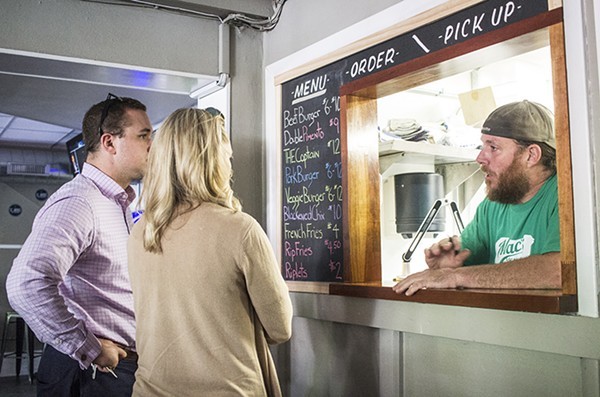 Though it was five or six years ago, Chris "Mac" McKenzie of Mac's Local Eats (1225 Tamm Avenue; 314-479-8155) remembers in vivid detail his first boucherie like it was yesterday.

"It was a two-day event called 'Swine and Dine.' The first day you put the animal down, clean and prep it, and the second day is when you cook," he explains. "I was the guy in charge of collecting the blood. This guy Toby put down the pig with a .22 slug then pricked its heart to release the pressure so that you could collect more of the blood. I was underneath it on my knees with this stainless steel bowl to catch it all. It was life-changing, a humbling experience."

McKenzie understands his description of what it's like to attend a Louisiana-style boucherie — a whole animal cookout in which the beast is slaughtered on site — sounds macabre to most people, but that's why he feels it is so necessary to put one on. This Sunday he'll be doing just that, minus the on-site slaughter, at his "Louisiana Breakdown Party" at his restaurant Mac's Local Eats.

"We are totally disconnected from our food source. We don't understand that we are part of that suffering," McKenzie explains. "We're the only species on the planet that is removed from it like this. Something has to die so that we get to live."

For the party, McKenzie is bringing in chef Bryan Kyzer from Louisiana, who travels the country doing boucherie-style events. The festivities begin at noon and will include eight different dishes that utilize every part of the pig, from trotters to backbone. As McKenzie explains, it's the embodiment of what is meant by nose to tail eating.

"We're not cooking pork chops at a boucherie," McKenzie laughs. Instead, expect dishes like boudin, backbone stew, and gratons (pork cracklins). "I always tell people these underutilized parts like the organ meats are the most nutritious part of the animal," he says.

McKenzie, who was recently the target of protests and online harassment by a St. Louis chapter of the animal rights group Direct Action Everywhere, anticipates that there may be demonstrators present at the event, though he thinks they've got the wrong guy.

"I don't care if they protest my event. If they don't like it, that's fine, and I think they should have that right," McKenzie says. "But I think it's funny that they've chosen me, when 95 percent of the restaurants in town support concentrated animal farming."

McKenzie explains that the boucherie may be a special event this Sunday, but it goes hand-in-hand with the philosophy on display at Mac's Local Eats and his provisions operation, Mac's Local Buys — something he feels that the folks with Direction Action Everywhere miss. "Everything we do, we do out of respect for the animal that gave it's life so that we can live," he says. "We use every last part of that pig, but also we only buy pigs that are raised in a stress-free environment and are killed as humanely as possible. I know the 'happy animal' thing is a cliche, but there really is a difference when you let a pig be a pig."

VIP tickets are available for the "Louisiana Breakdown" party, but the event is free and open to the public. McKenzie will be serving all of the dishes throughout Sunday's service at Mac's Local Eats, and live music will be provided by Falling Fences. For more information, visit the Mac's Local Eats Facebook page.