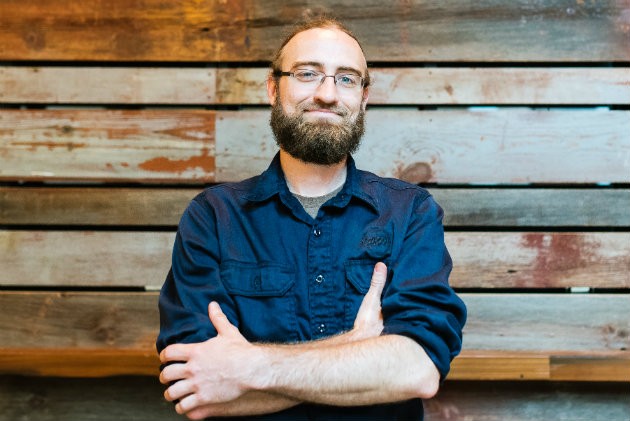 Sitting at the top of one of Munich's tallest buildings with a beer in hand, Jared Williamson of Schlafly (2100 Locust Street, 314-241-2337) can't help but look back with amazement at how he got here.

"I started working with beer about fifteen years ago, and I was introduced to Spaten early in my beer education," Williamson recalls. "And here I am at the source. It's a culmination, like I'm circling back to where it all began."

Williamson's job as head brewer at Schlafly has led him to Munich, where he is embarking on a tour of Germany's hop fields. But his beginnings were much more humble. A native of Indiana — the part of the state just outside of Louisville, Kentucky — Williamson was introduced to beer while working at New Albanian Brewing Company, an establishment that was the first in the area to add lesser-known brews to its taps. In the late 1990s, seeing beers like Spaten, Guinness and Sierra Nevada Pale Ale was not all that common in the Midwest. The novelty, as well as the quality of these beers, piqued his interest.

Though his job was to work on the brewpub's guest tap and bottle program, Williamson could not keep himself from wandering into the brewery. He found himself drawn in to the beer-making side of the operation. "I'm a musician, so I was drawn to the creative aspect, but I'm also a science nerd. The combination of the two is what really appealed to me," Williamson explains. "Eventually, the original brewer left and they handed me and another guy the keys. The world was our oyster, and we got to make the best beer we could — and make some mistakes too."

Though mistakes were part of the learning curve, Williamson considers himself to be fortunate to have been part of the generation of self-taught brewers who came up over the last decade. Instead of a formal, classroom-based curriculum in fermentation science, his education was completely self-taught and informed by on-the-job experimentation. "If they would've offered intro to brewing in ninth grade, I would've taken it," Williamson laughs.

Williamson worked for New Albanian for several years as the operation expanded to a second location. During that time, Schlafly was beginning to sell its beers in the Louisville metro area, and Williamson got to know people from the St. Louis brewery. In 2008, he was invited to St. Louis to be a part of Schlafly's "Prohibition repeal" party which would prove to be a fateful trip: There, he met the love of his life, and though he went back to Indiana and New Albanian, he knew he would eventually need to be in the Gateway City.

About six years ago, Williamson made the move to Schlafly, where even now he adds to his brewing knowledge every day. "Having a lab and the kind of quality control that we do really makes a difference," he explains. "Anybody can put yeast into sugar water, but consumers are getting more educated about what's good and what's not. Just because something is craft beer doesn't mean it's necessarily good."

Williamson thinks that this marks an important turning point in the craft beer industry. "It used to be us small breweries fighting the man," he says. "But now that the industry has grown up enough, instead of looking at the big guys we are looking across our shoulders at one another." He thinks this is ultimately good for the consumer: The drive for quality is making a better end product.

One of those quality products will be on display at Schlafly's annual Hop in the City on September 16: the Berry Berry Tart. Williamson describes what has been crowned this year's festival beer as a fruited wheat beer based on a French raspberry tart with lemon curd and a graham cracker crust. "We've become known for taking dessert dishes and turning them into liquid form," Williamson says. "It's light, tart and refreshing. This will be the first time it is on the Tap Room system, and I'm excited to see what everyone thinks about it."

In addition to the festival beer, he's also looking forward to showcasing an old Schlafly pilsner recipe that has not been brewed for some time. He also has a special surprise in store for festival attendees. "We have a surprise special keg of the Eleventh Labor, which was a rare release several years ago," he says. "We saved it for a rainy day and are going to roll it out for the event — we just hope it doesn't actually rain for the festival."

As he prepares for the Hop in the City, Williamson can't help but think of a quote one of his brewer friends used to say that always gives him a laugh. "He would tell me, 'You know, being a brewer is a lot like being a rock star, except your groupies are 40 and 50-year-old men and you're not actually a rock star,'" laughs Williamson. "And it's true. It's a lot of work and you're always cleaning and sanitizing and stuff, but you get to create exciting things for people that bring pleasure into their lives. Originally, I thought I would do that through music, but now I get to create liquid art."

Williamson took a break from his Munich hop tour to share his thoughts on the St. Louis food and beverage scene, Rocky Mountain oysters and why this city really needs a craft beer and sushi restaurant.

What is one thing people don’t know about you that you wish they did?
I play in a band called Stank Thunder, and our music style is Viking Space Jazz.

What daily ritual is non-negotiable for you?
Coffee and listening to music.

If you could have any superpower, what would it be?
The ability to end all wars.

What is the most positive trend in food, beer, wine or cocktails that you’ve noticed in St. Louis over the past year?
That it keeps getting better.

What is one thing missing or that you’d like to see in the St. Louis food and beverage scene?
A sushi restaurant that focuses on craft beer pairings. I've been to some in other cities and it is an overlooked niche here.

Who is your St. Louis food or drink crush?
Mission Taco Joint.

Who’s the one person to watch right now in the St. Louis food and beverage scene?
Our brewer, Emily Byrne, has grown by leaps and bounds in her time with the company, has become a leader in the beer community, and has a big future ahead of her.

Which ingredient is most representative of your personality?
Hops. They have a sedative quality, and I try to be laidback, but they can also be assertive and spicy, and so am I.

If someone asked you to describe the current state of St. Louis’ food and beverage climate, what would you say?
High quality and diverse with so many great options.

What is your after-work hangout?
My couch with my animals.

What’s your food or drink guilty pleasure?
A paloma.

What would be your last meal on earth?
Tacos and beer.