Half & Half Brings Brunch — and Blueprint Coffee — to Webster Groves

Half & Half (220 West Lockwood Avenue, Webster Groves; 314-942-1617) opened its Webster Groves location to an eager crowd on Tuesday, September 6, with customers lining up for that Blueprint coffee at 6:55 a.m.

It's the second spot for the brunch hotspot. Chef Mike Randolph, who also owns Publico and the soon-to-close Randolfi's Italian Kitchen, first opened its big sister in Clayton in 2011. The Clayton location has been a huge success, and even played a role in the birthing of one of the metro area's premiere coffee joints: former general manager Mike Marquard went on to start Blueprint Coffee, the acclaimed Loop java spot.

Says chef/owner Mike Randolph, “Clayton has been so good to us, being part of a community, and as we looked for a second location, we wanted to find another community that we could ingrain ourselves into and give people that same kind of neighborhood feel — where you know the staff and can get a good cup of coffee and some great food to go along with it.” When First Watch vacated the space at 220 West Lockwood Avenue, it seemed like the perfect fit.

The Half & Half team knew they wanted to put their own stamp on the location before opening for business. Randolph says, “The whole dining room/bar area has been overhauled, and we worked with Space Architecture who did a great job of evolving the brand but giving it that same familiar feel.” There’s now a mix of bar space, high and low tables, and a coffee-to-go window at the entrance for people who want a great cup of coffee but don’t want to stop in for a sit-down meal.

The same menu of inventive brunch dishes, which was overhauled last year, is served at both locations. Egg dishes (made with cage-free eggs) range from $8 to $16, and sweeter breakfast options like French toast and pancakes range from $7 to $11. The lunch menu is available after 11 a.m., with salads and sandwiches from $10 to $16 each. Half & Half also serves Blueprint and other specialty coffee, plus cocktails, beer and wine.

Scroll below for more photos. 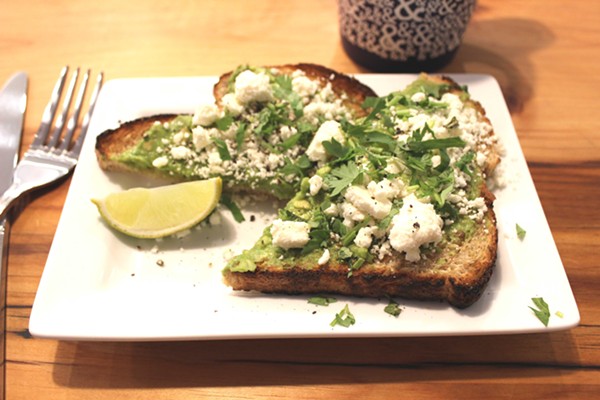