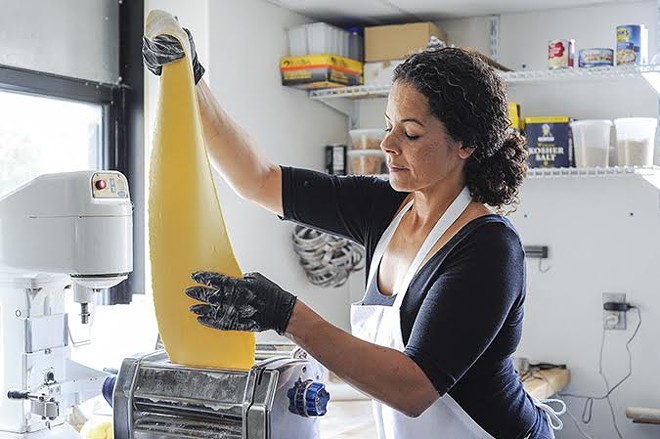 Sharon Asher-Harter, the pastry chef of Scape (48 Maryland Plaza, 314-361-7227), had just one birthday party her entire childhood. So when she became a mother, she vowed to go all-out for her kids.

"I made sure every birthday was a total blowout for them," Asher-Harter explains. "The night before their birthday, after they fell asleep, I would sneak into their rooms and decorate with balloons and streamers. Every year they would have a different theme, and I started making cakes with stencils of their favorite characters on them — everything from Powerpuff Girls to Scooby Do. That's when I realized I loved to cook and bake."

Asher-Harter was content as a home cook and baker, but her friends and family could see that she had a real knack for the culinary arts and served as her biggest champions. In fact, her sister's praise landed Asher-Harter her first professional cooking gig.

"My sister was dating the owner of Bar Italia and was in there for dinner one night," Asher-Harter recalls. "They served her this very plain and sparse-looking cake, and she found out that their pastry chef had left, so there was no one really there to make the desserts." Asher-Harter's sister informed them that she'd be perfect for the job — and in no time, they offered her a meeting.

At first, Asher-Harter wasn't sure that she wanted to jump into the business, but she realized an opportunity like that might not present itself again. Though she had limited experience in pastry, she looked up a recipe for Italian custard with fresh raspberries and headed into the restaurant for an interview. "We just started talking, and then they started showing me the kitchen and telling me where I was going to work," Asher-Harter recalls. "I thought, 'I guess I have the job.'"

Asher-Harter's excitement for her new job quickly turned into angst as she couldn't help but wonder whether she was ready for her new role. At her employer's instruction, she was supposed to make Genoise cake, a notoriously difficult recipe. For two weeks, she attempted the cake, making mistake after mistake and questioning her competence.

"I was so stressed out and out of my comfort zone that I wanted to cry and go home," Asher-Harter says. "But I finally made it, and I made all of their other recipes, and eventually I got to the point where I didn't even have to look at recipes and was even changing them."

Asher-Harter happily worked at Bar Italia for fourteen years, and she would have worked for many more if not for a former co-worker who encouraged her to pursue the executive pastry chef position at Scape. Though the timing was not great (her daughter had been in a serious car accident), something inside of her told her to say yes.

For nearly a year, Asher-Harter worked for both Bar Italia and Scape before finally leaving the former to devote herself fully to her new job. Now, in her current role at Scape, she sometimes can't help but stop and think how she got to where she is, despite her lack of professional training — a fact that she sees as an asset. "Everything I know I've learned by trial and error," Asher-Harter explains. "I have a palate and I have passion. That's the important thing. Anyone can go to culinary school, but if you don't have passion, you won't go very far."

Asher-Harter took a break from the pastry kitchen to share her thoughts on the St. Louis culinary scene, the places she'd go if she could travel at the speed of light, and why you will never see a certain syrupy staple in her kitchen.

What is one thing people don’t know about you that you wish they did?
That I'm self-taught. I think the fact that I'm not classically trained gives my baking a signature style.

What daily ritual is non-negotiable for you?
Listening to music. I'm a huge lover of house music, and people rarely see me without my earbuds.

If you could have any superpower, what would it be?
The ability to travel at the speed of light. I could travel to any place in the world whenever I wanted: brunch in Paris and dinner in Morocco followed by a house music fest in Ibiza.

What is the most positive thing in food, wine or cocktails that you’ve noticed in St. Louis over the past year?
The positive support chefs give each other. It's competitive, but the mutual love for food and each other's success (which helps our city succeed) is heartwarming and inspiring.

What is something missing in the local food, wine or cocktail scene that you’d like to see?
Even though we have a very culturally diverse culinary scene, I still think we are missing a few key representations. I'd like to see an Indonesian restaurant.

Who is your St. Louis food crush?
Nathaniel Reid. I admire that he's traveled to Paris to get his culinary education and chose to come back to his roots to teach classes and offer the best pastries in St. Louis.

Who’s the one person to watch right now in the St. Louis dining scene?
Tyler Davis at Element. He's not only one of the top pastry chefs in St. Louis, but his culinary talent is cutting edge and always inspires me to do more.

Which ingredient is most representative of your personality?
Truffle oil. Adding this ingredient transforms so many dishes into something that sets it apart. Its unique and seductive flavor keeps you thinking about it days later.

If you weren’t working in the restaurant business, what would you be doing?
I would either be making jewelry or anything creative like gardening or something in the music industry.

Name an ingredient never allowed in your restaurant.
Hershey's syrup. It's an abomination, period.

What is your after-work hangout?
Brennan's. It's my absolute favorite place to unwind and see the other regulars and staff, many of whom have become dear friends.

What’s your food or beverage guilty pleasure?
Before bed, I sometimes like a hefty spoonful of peanut butter and a glass of pinot grigio.

What would be your last meal on earth?
A dish I recently had a Herbie's: seared scallops over farro, with arugula and a buerre blanc ....with pinot grigio.