STL Square Off Aims to Be About More Than Just Pizza 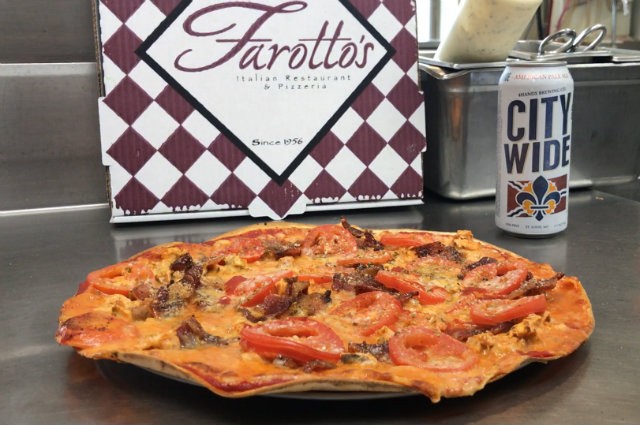 You may have heard the announcement earlier this month about the STL Square Off, the city's first-ever St. Louis-style pizza festival, which is scheduled for Berra Park (1825 Macklind Avenue) from noon to 5 p.m. on October 8. You may even recall that it will feature eight local pizza purveyors, each of them bringing their own take on St. Louis-style pizza — cracker-thin crust, Provel topping and all — to compete for the title of "Best St. Louis-Style Pizza."

But what you may not know is that the festival is not about pizza. Or, at least, that it's about more than just pizza.

That's according to co-founder Michael Powers. Powers, who has had a hand in numerous St. Louis area events, including the creation of Tower Grove Pride, explains that celebrating St. Louis' unique pizza is just part of the idea behind the festival. It's also an opportunity to bring St. Louisans together, celebrate their contributions and tell the city's story.

The concept started with Matthew Mourning, Powers' partner, who loves St. Louis-style pizza and originally came up with the idea for a festival devoted to it. The two were further inspired thinking back to time they'd spent in New Orleans, noting how proud the locals were of everything that made their city unique. Along with co-founders Jim Barnthouse and Rick Ruderer, Powers now hopes to bring that same community and pride to the STL Square Off.

"When you see it, you know it," Powers says of St. Louis' famous pizza. "And we should celebrate it."

A big way the team is looking to do that is in their search for participating pizza companies. Rather than simply filling the list with well-known spots, they're looking for contestants from all around the area so people can try new pizza, meet the people behind it and learn more about all the different neighborhoods they come from. So far, Dogtown Pizza and Farotto’s Pasta and Pizzeria have been announced as participants; the other six will be announced on the STL Square Off Facebook page one by one in the weeks prior to the event.

The STL Square Off is also working to feature a wide variety of local retailers — more than 50 of them — as well as live music, lawn games, kids activities and other St. Louis food favorites like gooey butter cake and toasted ravioli.

With a $25 ticket, festival goers will get admission, a square of each participating pizza company's pizza, and a choice between a sixteen-ounce beer from 4Hands, a glass of wine or a soft drink. A vegetarian ticket, also $25, will guarantee you pizza sans meat. Each attendee will also get a ballot to nominate their favorite of the eight pizzas. A portion of the proceeds from each ticket will go to Hill 2000, the neighborhood's nonprofit neighborhood association.

Powers anticipates this to be just the beginning of the STL Square Off. He's aiming to grow the festival in the future, including adding more participating pizza vendors.

Says Powers, "I'm hopeful it will be a hit."

You can keep up on the latest about the STL Square Off, including ticket information and  announcements of the remaining contestants, on the event's Facebook page.