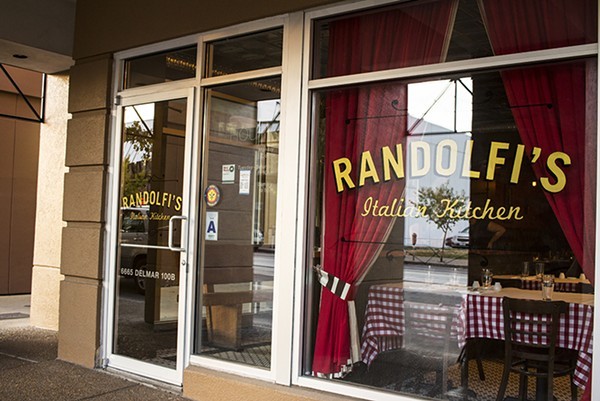 Randolfi's Italian Kitchen (6665 Delmar Boulevard, University City; 314-899-9221), the acclaimed restaurant that James Beard-nominated chef Mike Randolph opened as a tribute to his Italian roots, is closing. The restaurant's last day of service will be Saturday, September 9.

In a statement released today, Randolph notes that the decision to close is a "deeply personal one," simply stating, "We've thrown everything we have into his restaurant. There have been a lot of tears, but it's time to close the chapter."

Neither Randolph, nor his wife and co-owner Liz Randolph, offered additional details regarding the closure. They did, however, offer praise for chef Tommy Andrew, saying he was "ready to move on."

"He’s one of the most talented chefs that I’ve ever had the pleasure of standing shoulder to shoulder with in the kitchen. Liz and I will be the first to dine wherever he lands,” Randolph said in a statement.

Randolfi's opened in the summer of 2015, garnering critical acclaim for its evocative approach to the old-fashioned, red-checkered tablecloth Italian restaurants of the 1970s. Though the food was approachable, Randolph's talent and creativity were on full display in his inventive riffs on classic dishes.

This was Randolph's second concept within the building on the Loop's western end at 6665 Delmar Boulevard. His Neapolitan pizzeria, the Good Pie, moved into the space from its original Midtown location in 2014, serving Loop-area diners impeccable southern Italian cuisine until he converted it to Randolfi's six years later.

It is unclear whether or not Randolph will be vacating the property or opening another concept in the place. A spokeswoman for the restaurant stated that "an announcement about the future of the restaurant will be made at a later date."