For Dinner: 10 Courses of Edible Insects, From Chef Logan Ely

Raise your hand if you’re grossed out at the prospect of chowing down on an insect. Did you know that two billion people on the planet eat insects on a regular basis? Each of the 1,900 edible insect species has a different flavor and all of them are packed with fiber, protein, good fats and minerals.

And they are actually quite tasty. Cooking with insects is really more akin to cooking with spices — they add flavor and blend in with the main dish.

That was on display Tuesday night at a benefit dinner for the St. Louis Metro Market, An Evening of Edible Insects. Chef Logan Ely and his team of brothers, Eric and Chris Tirone, of Square1 Project served up an adventurous ten-course meal with each course featuring one or more insects in inspired flavor pairings. Says Ely, “What’s not to love about insects?”

The meal had been under preparation for months. Even the insects required meticulous sourcing. As edible insects are not generally available in the metro area, the ants and crickets came from Colorado-based Rocky Mountain Micro Ranch. The scorpions? From Savage Scorpions in Blue Springs, Missouri.

The thirteen guests in the evening’s first seating were greeted with Logan’s playful welcome, “We have some fun things planned for tonight!” Yes, if you're into invertebrates.

For the first four courses, guests were served a dry sparkling wine. Paired with that in the first course? Puffy shrimp  flavored with powdered dill and crickets.

The course was presented a bit like a flower arrangement for the table. The crisp, light pieces were akin to fried pork rinds.

For the second course, crispy tofu spheres made with blended scorpions were paired with raw jicama spheres and served with a cucumber jelly (cucumber juice seasoned with lemon) and topped with toasted nori seaweed oil and green tomato juice.

Up next for the third course was a refreshing cold lettuce roll filled with cricket soba noodles made with black garlic oil and weaver ant miso, soaked in fermented crickets and sprayed with a coriander mist.

The fourth course was served elegantly in oyster shells warmed in dairy and fennel oil, with artichokes cooked in grasshopper oil and toasted weaver ant miso.

In the fifth course, paired with sauvignon blanc, beautifully sweet potatoes were reassembled and cooked in a paste of scorpions and ants with aged beef fat and fennel. They were served in the same yogurt-style sauce for a richly satisfying dish.

In the sixth course, summer squash cooked in a broth of all of the insects was dehydrated and then rehydrated with green garlic top butter and topped with grated cured egg yolks. A summer squash miso was served on the side.

In the seventh course, beet root cooked in pork fat was served with a beet béarnaise made with black Chinese ants and topped with beef heart.

The next course was paired with Saison de Lis, a Belgian-style beer from local Perennial Artisan Ales.

In the eighth course, a duroc pork rib was coated in a barbecue sauce made with candied scorpions and malt vinegar and topped with sprouted lentils and a weaver ant garam masala spice. 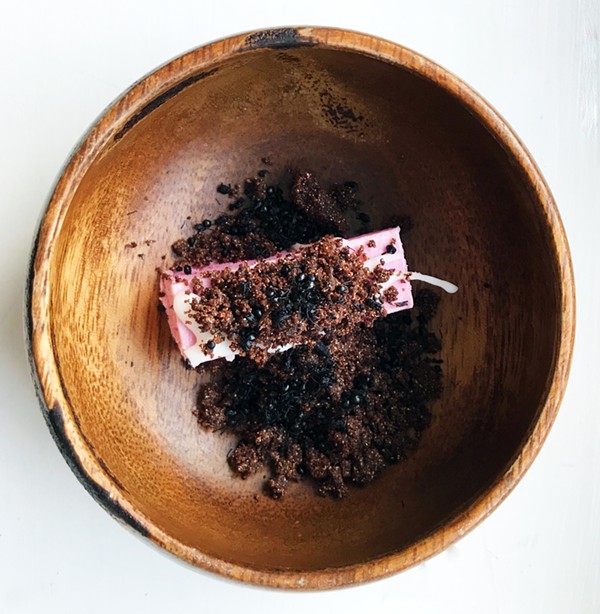 Then dessert was served. In the first of two dessert courses, a delicate frozen elderberry cream with white chocolate was topped with a dark chocolate crumble and black Chinese ants.

The final, tenth, course of the night consisted of lightly whipped cream infused with herbs topped with a semi-frozen granita made with allspice leaves and powdered fig leaf with cricket powder on top and sprayed with a peppermint leaf mist.

As a parting gift, our last taste included no  was a delightfully crisp digestif of homemade vermouth, ginger and lime juice.