Paraquad to Open the Bloom Cafe, a Breakfast and Lunch Destination with Big Goals

Paraquad (5240 Oakland Avenue), the region's premiere non-profit serving those with disabilities, is about to expand its mission in a big way — with a cafe that hopes both to serve food and serve its clients, too.

The Bloom Café, which plans to be open by the end of the year, will be located on the agency's Dogtown campus, providing a job training program in addition to tasty eats. Says Paraquad President and CEO Aimee Wehmeier, “Our goal is to be the go-to destination for good food, good service and good training opportunities for people with disabilities.”

The program will have a three-part process, which includes culinary training followed by a paid internship (lasting three months) and then assistance in finding a job, through help with resume writing and interviews. The program plans to serve about 30 people at a time.

After months of struggling to come up with a name, Paraquad turned to the community, seeking a name and logo ideas via social media. The café got its name after the agency surveyed 140 community submissions.

The cafe, which will include both indoor and outdoor seating, is set to be open six days a week (closed Sunday) for breakfast and lunch. On the menu, you can expect breakfast sandwiches and burritos, pastries, and salads made in-house. On a special note, the flower garden that runs along the side of the patio doubles as a vegetable garden, where fresh vegetables will be grown and picked throughout the year. “We don’t want it to be really expensive, but we want it to be healthy and accessible to everyone,” says Beth Jantz, grant writer and project manager of the Bloom Café.

The long-term goal of the Bloom Cafe is to further assist people with disabilities in becoming self-sufficient by building new skills in the culinary field and customer service.

“When I first started, I didn’t have a place to stay,” says Paraquad client Lisa Lewis. “When I found a place, they paid my first and last months rent and bought my furniture.” Lewis’ love for the organization and the impact it has made on her life brought her out to the pop-up cafe Paraquad hosted yesterday to reveal the new venture.

The Bloom Café has launched a Kickstarter campaign to help with funding for appliances.  Paraquad is also currently looking for a culinary director to fill the cafe's supervisory position. Follow the links for more information. 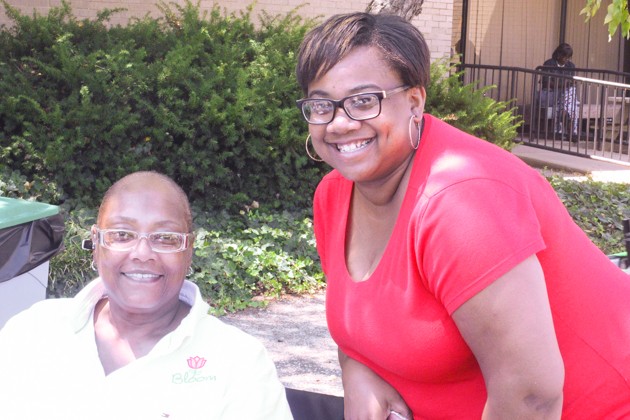