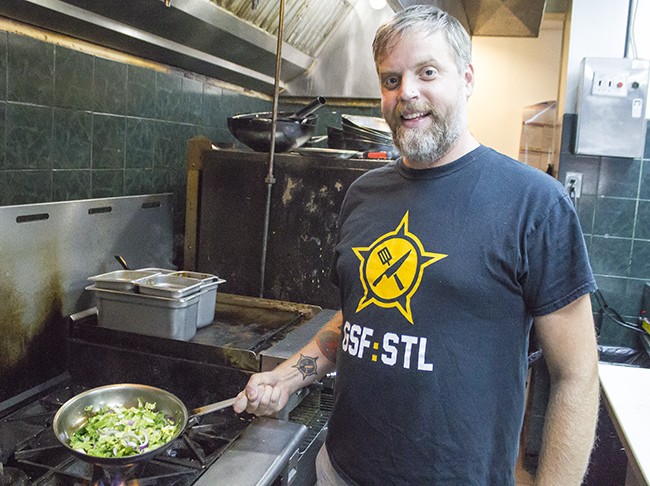 While many eight-year-olds can be found playing video games or running around outside with friends as dinner time approached, a young Brian Hardesty was in the kitchen.

"When I was a child, my mother and grandmother taught me the fundamentals of cooking — how to make pizza dough, how to make sauce and put together salads," explains the chef of Guerrilla Street Food (3559 Arsenal Street, 314-529-1328). "As time went by, I'd mastered those recipes, so when it was pizza night at the Hardesty household, I was the one who got to make dinner for the family."

Though he knew he loved cooking, the acclaimed chef didn't get serious about his career plans until he was in his early 20s. Having passed on college after high school, Hardesty took stock of his skills and realized that food just might be his calling. "I asked myself, 'What do I know how to do?'" he says. "I knew how to cook, so I just jumped right in."

Instead of heading off to culinary school, Hardesty opted instead to get hands-on training. He took his first restaurant job as a dishwasher at Italian Kitchen, a St. Charles eatery, and worked his way up to kitchen manager within a month. Though the job came with big responsibilities, it also exposed his limitations. "I knew that if I wanted to do more I needed to learn more," Hardesty explains. "So I just slowly learned a little here and there, teaching myself how to make stocks or to use my knives. I tried to capitalize on where I worked — in a sense, the places I worked paid for my education."

Hardesty worked at a few popular restaurants — Harvest, Winslow's Home — before the opportunity he'd been waiting for came knocking. He'd heard that Terrene, a respected restaurant in the Central West End, needed an executive chef, so he sat down with the owner and pled his case. "I told him, 'Look, I've never been an executive chef, but I have the ambition and personality and skills to deliver what you want,'" says Hardesty. "I told him that I felt I could make the place special. He agreed."

During his time at Terrene (and later Element), Hardesty made a name for himself, but it was an acquaintance he made off the job who set his destiny in motion. Through mutual friends, he was introduced to Joel Crespo, and the pair instantly clicked over skateboarding, music and, most importantly, food. Hardesty would host Crespo at Terrene, cooking him elaborate tasting menus where he would let his creativity shine.

The dinners sparked an ongoing conversation about food and the possibility of someday opening their own restaurant — something the pair realized they would have a difficult time doing because of the up-front expense. They began talking about the popularity of food trucks on the West Coast and how the idea was overdue in St. Louis. Why not go that route?

Over the course of talking about the idea they began seeing a few trucks pop up locally and realized that they could no longer wait. Hardesty left Terrene, Crespo left his job in the mortuary business, and the pair set off to make their mark. The only problem: They needed to figure out what kind of food to do. "We thought burgers or tacos or whatever, but we didn't want to do what everyone else was doing," Hardesty recalls. "I told Joel, 'Dude, you're Filipino and every time you share any Filipino food with me I love it. Let me teach myself and let's do it.'"

That was 2009. Today, Filipino food is one of the hottest culinary styles around and their concept, Guerrilla Street Food, is one of the city's most popular spots, with a south city brick and mortar location, another on the way in the Grove and also a smaller operation serving a more limited menu inside 2nd Shift Brewing.

Still, Hardesty can't help but think back to the early days when he and Crespo were just two guys taking a chance. "That's how we got the name," Hardesty explains. "It was just the two of us guys going up against big corporate places, punk rock style."

Hardesty took a break from preparing non-traditional Filipino fare to share his thoughts on the St. Louis restaurant scene, his love of food history and why you'll never see margarine in his kitchen.

What is one thing people don’t know about you that you wish they did?
One thing that people don’t know about me that I wish they did know is that I am really into food history. I love to know where my ingredients come from and so it’s natural for me to want to know where certain dishes and recipes come from as well. There is usually a great story behind every significant recipe out there, and I need to know about them all!

What daily ritual is non-negotiable for you?
A daily ritual for me is to wake up give hugs and kisses to my wife and kids, water the garden, play with the dogs, then begin my work day.

If you could have any superpower, what would it be?
I would like the power of invulnerability. Useful in the kitchen.

What is the most positive thing in food, wine or cocktails that you’ve noticed in St. Louis over the past year?
The most positive thing in the business this past year has been all of the new places and new faces popping up and becoming some of the best new spots in the city to dine and drink. We all need that continual push to make this city a hospitality destination. New restaurants and concepts facilitate that better than anything else.

Who is your St. Louis food crush?
Chef Michael Miller [Kounter Kulture] is my longstanding food crush. He's one of the most talented people in the city.

Who’s the one person to watch right now in the St. Louis dining scene?
Chef Josh Poletti [Basso] is my choice for who to watch. He is at the top of his game and he is on the move. Look out!

Which ingredient is most representative of your personality?
An egg. I am versatile, essential and good for you.

Name an ingredient never allowed in your kitchen.
Margarine. Gross.

What would be your last meal on earth?
Family dinner at my parents’ table, surrounded by my loved ones with whatever my mom felt like making.